Baku is known for its glitzy, government-controlled development. But the city’s creative class is making a scruffy central neighborhood its own. 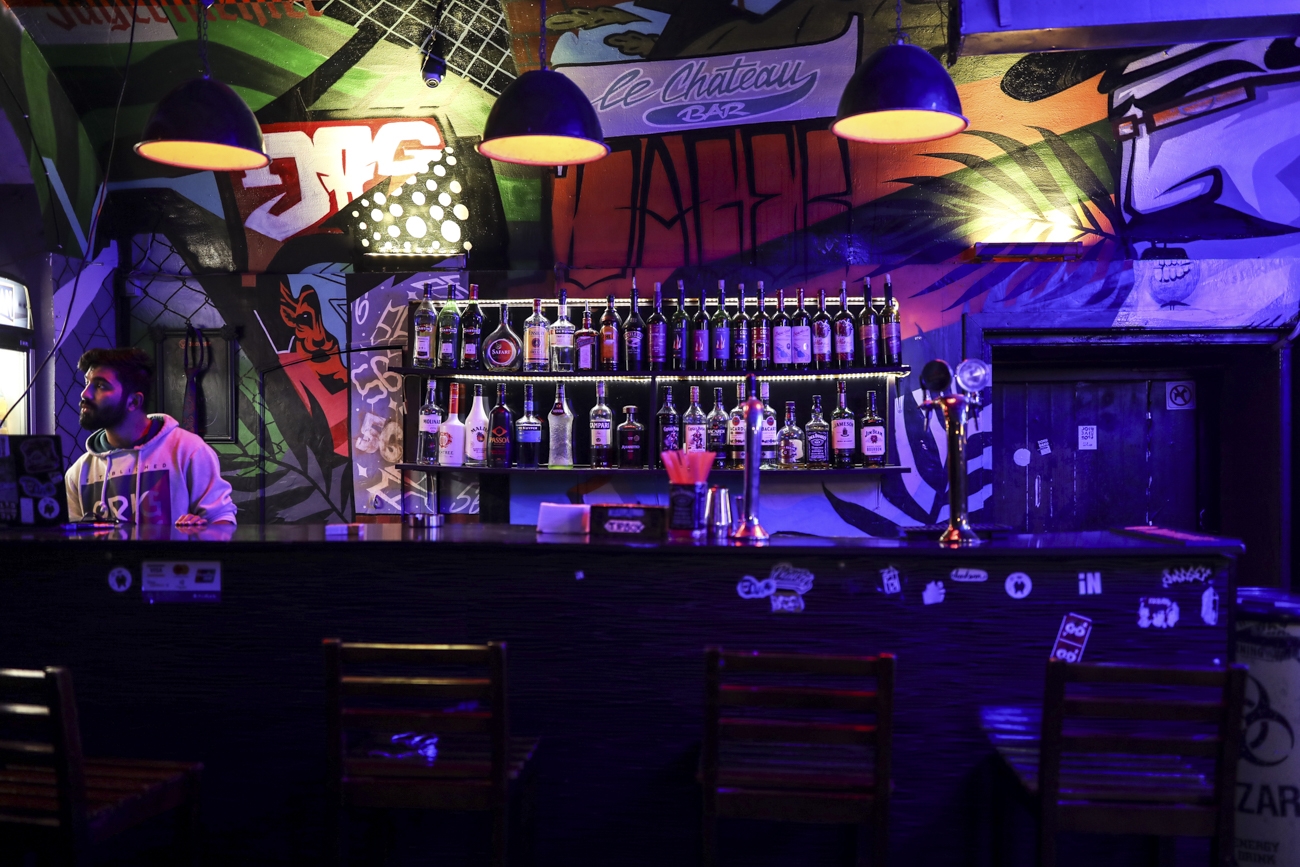 Le Chateau opened in Baku in 2015. (All photos by Sitara Ibrahimova) 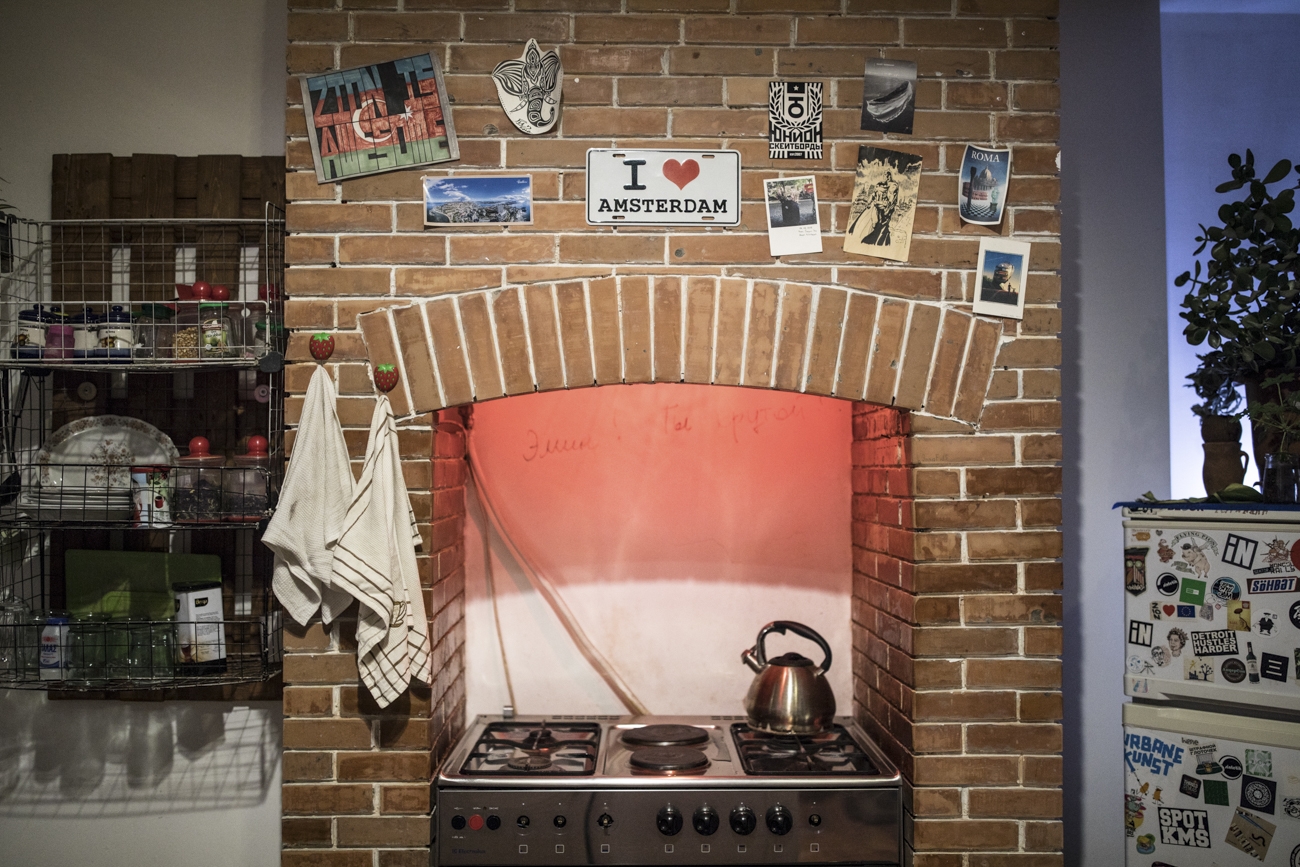 Inside ZION, a youth hostel, that provides lodging and events for foreign travelers and locals. 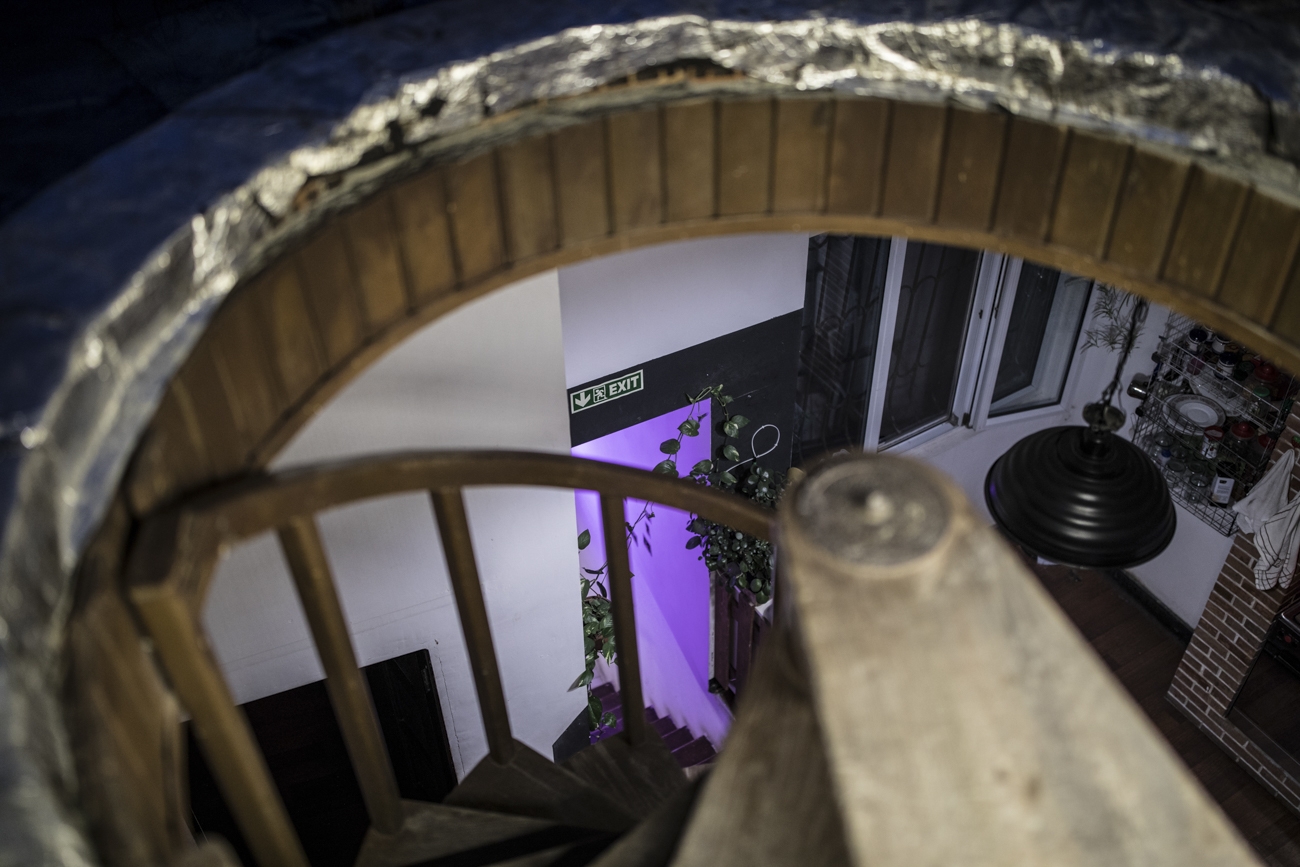 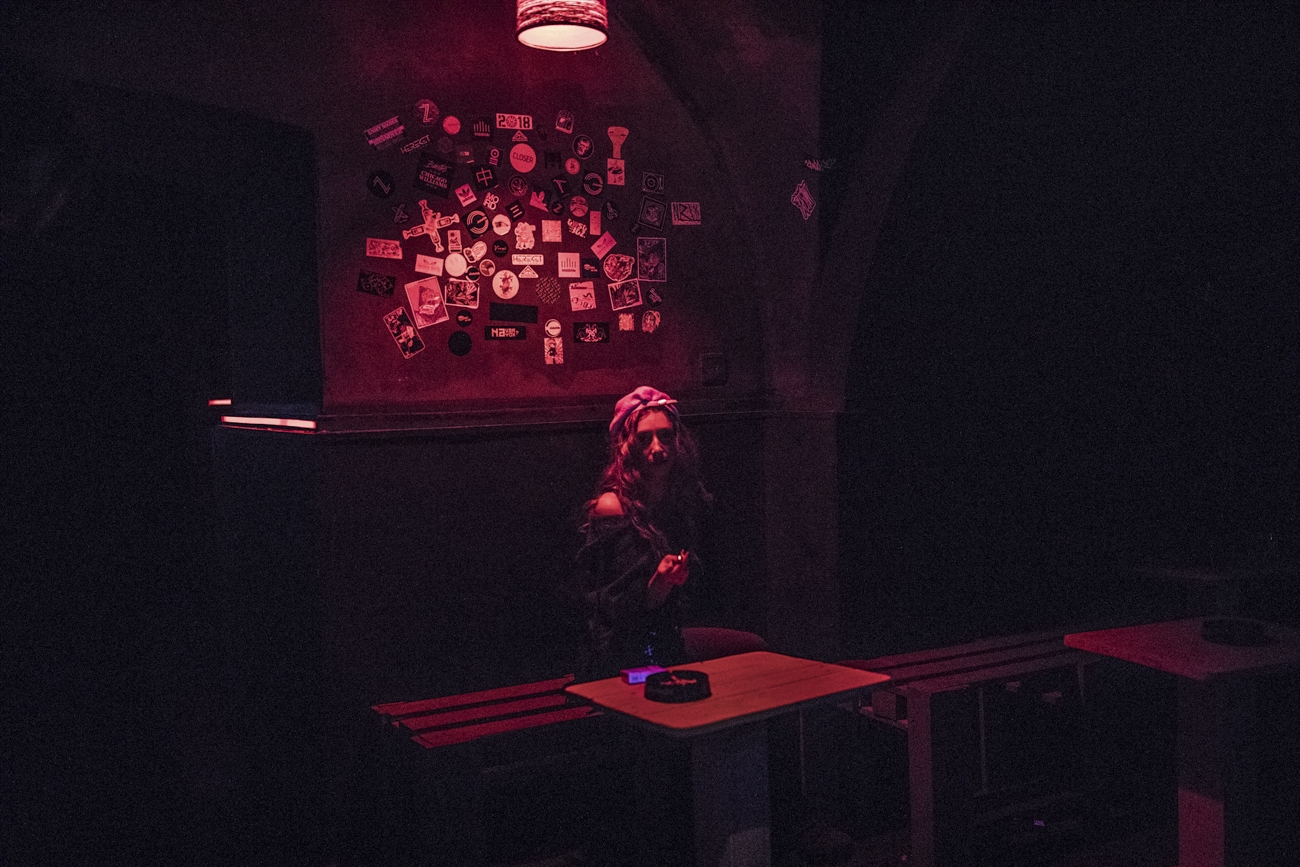 A patron at the music hall, Sintetik. 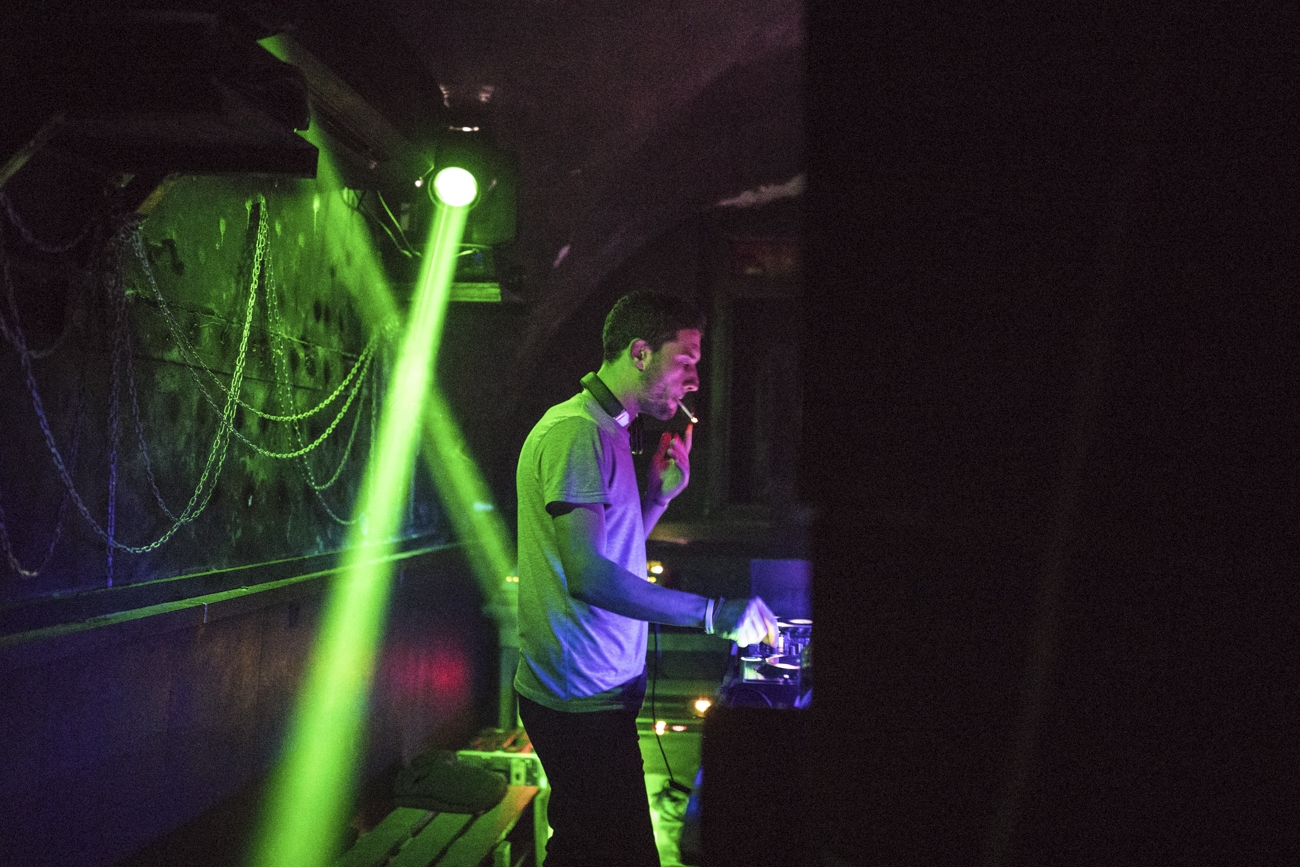 A DJ at Sintetik in Baku. 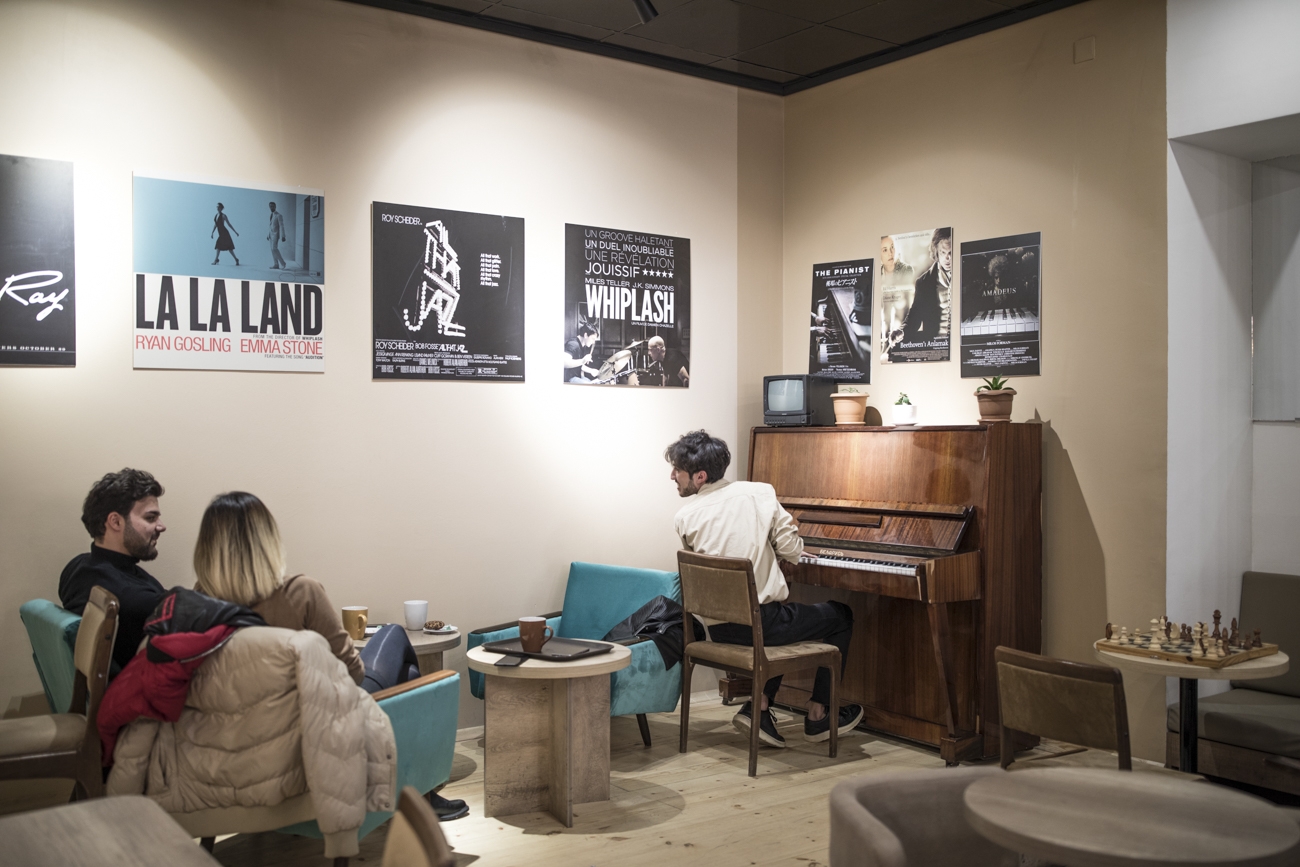 Coffie Moffie, a cafe run by young Azerbaijanis in Baku. 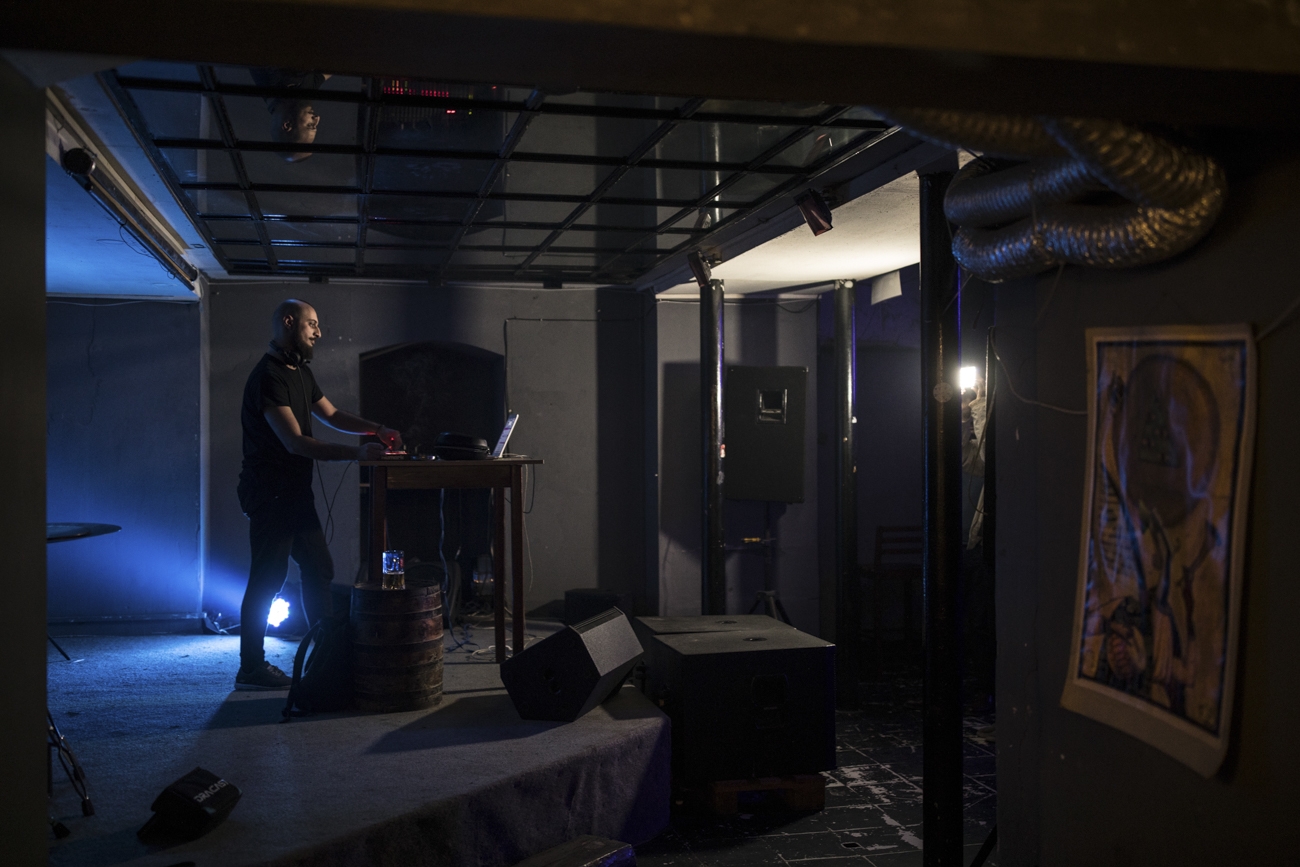 A DJ plays at Le Chateau. 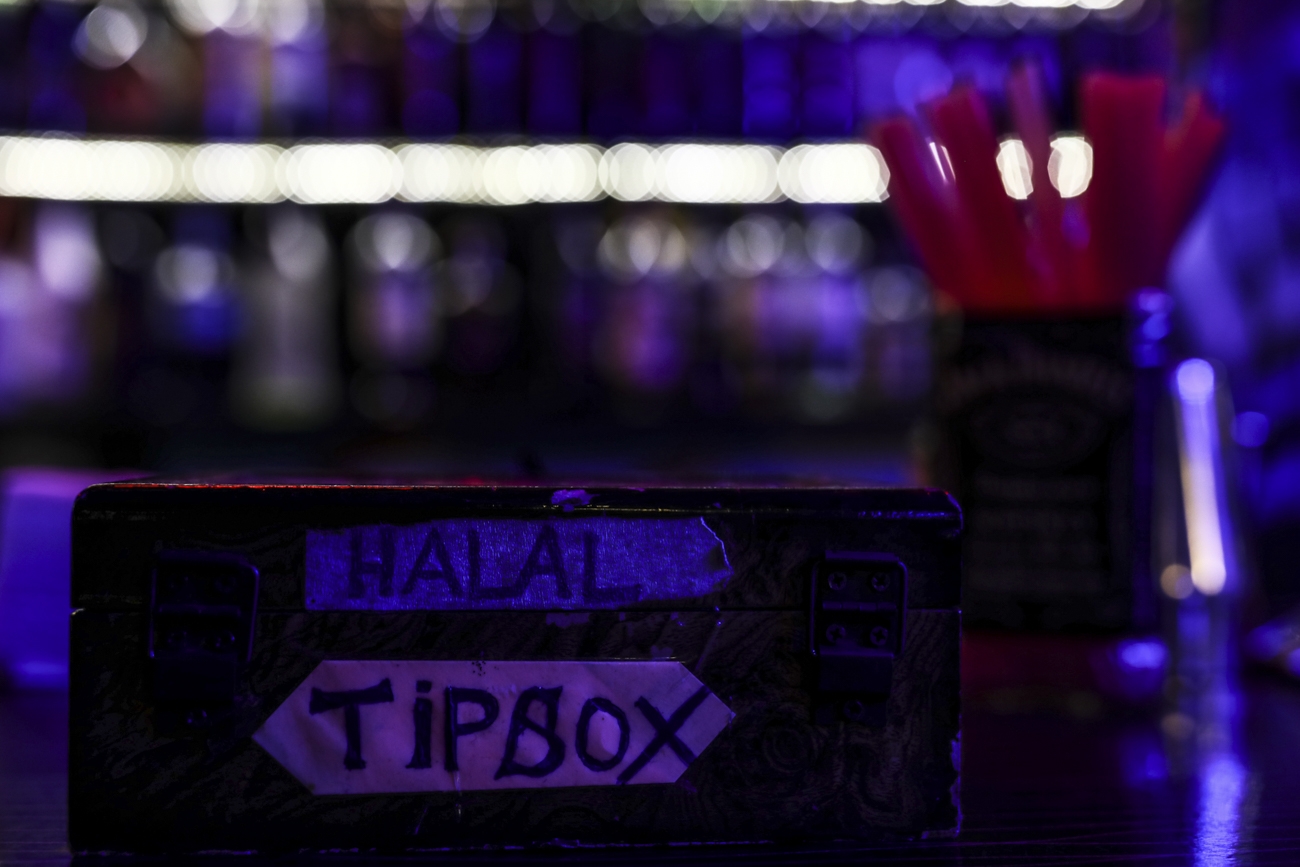 A tip jar at Le Chateau. 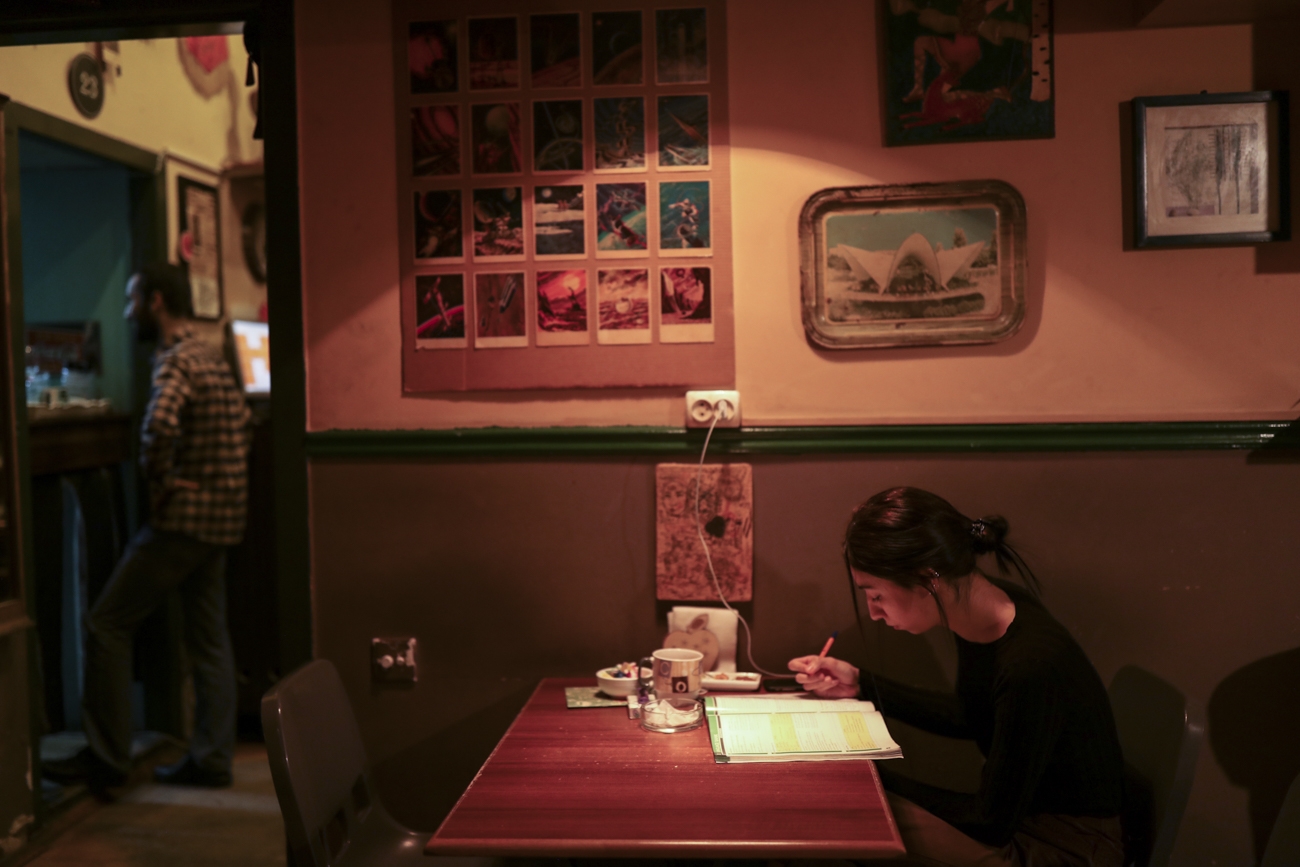 Old School is a café and bar with vintage Soviet décor. 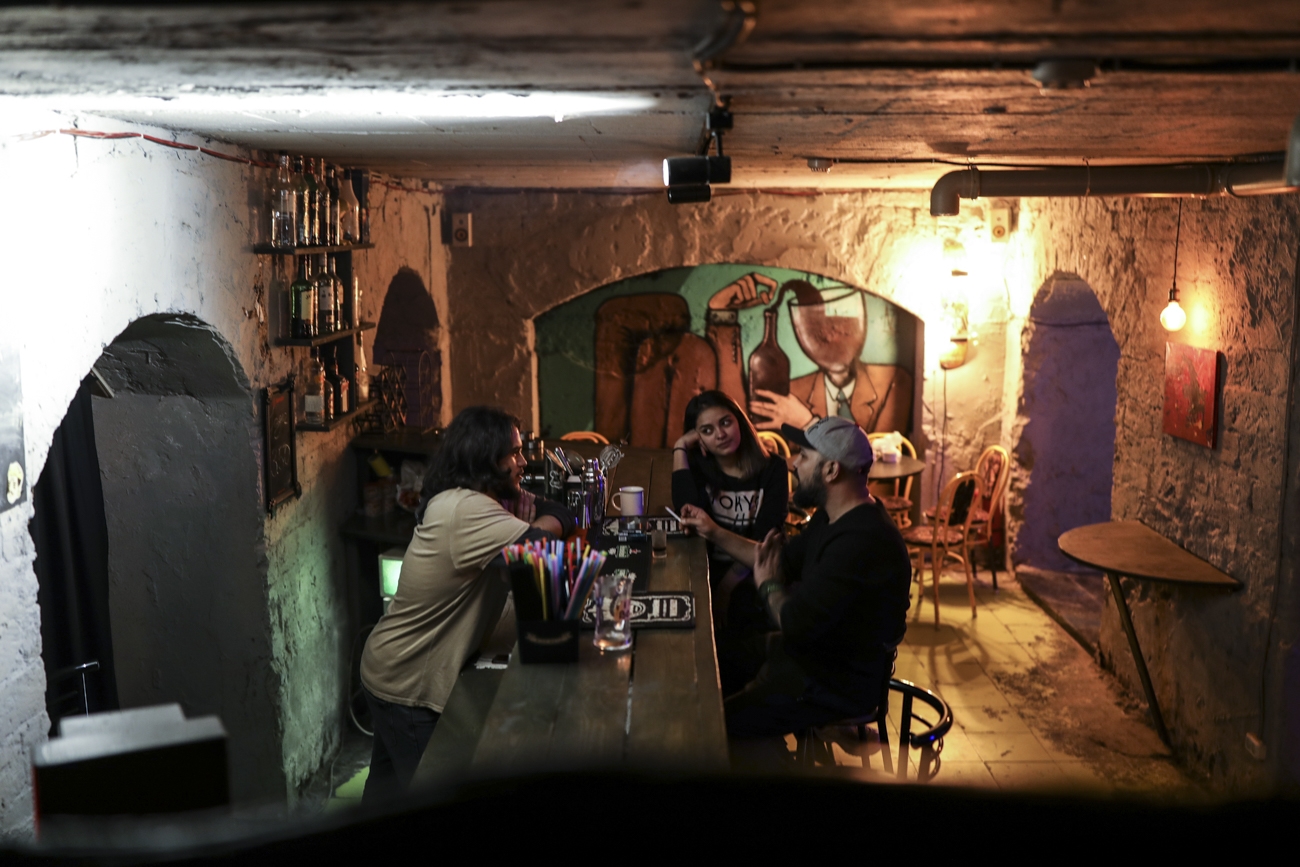 People gather at Kotti Bar. The bar was inspired by owner Araz Pashayev's time in Berlin. 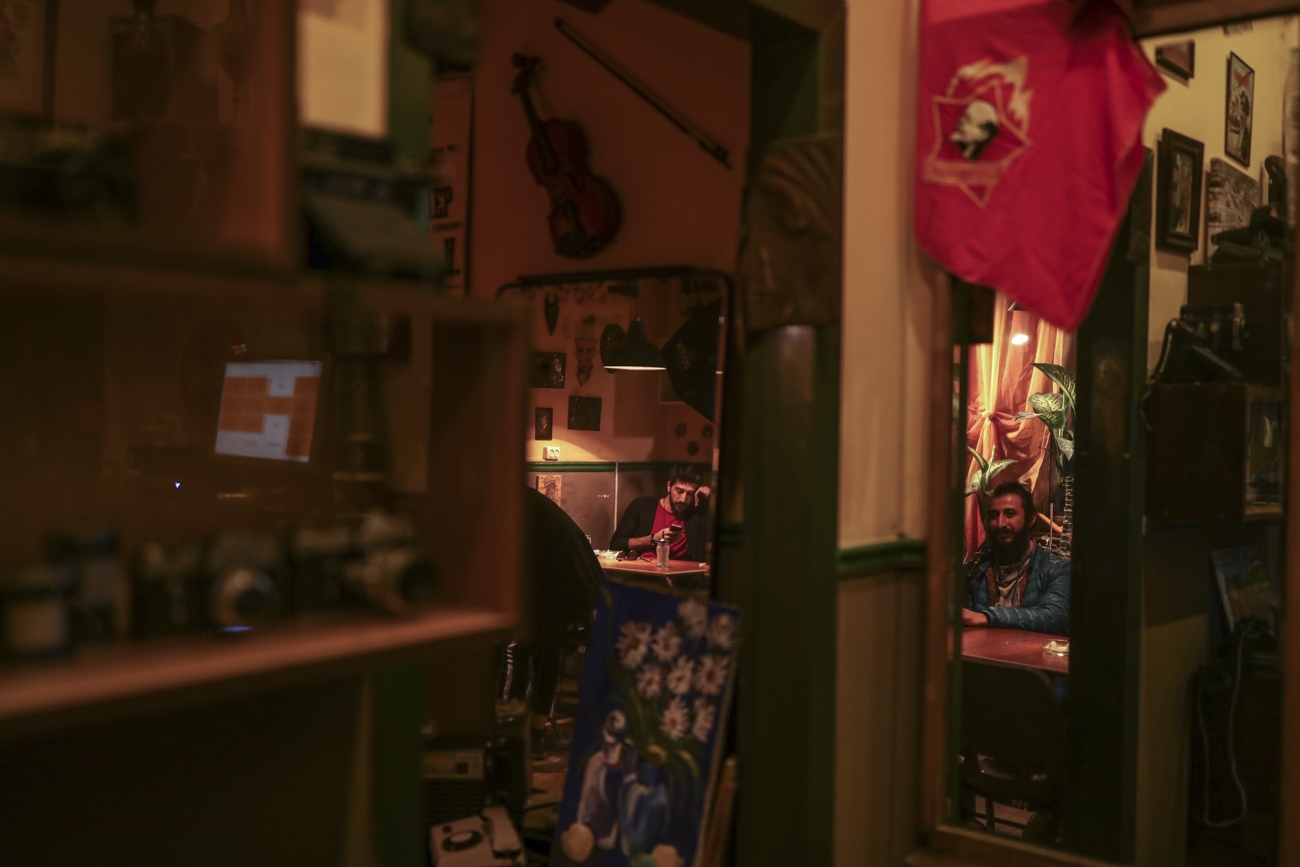 At Le Chateau Music Bar in a central Baku basement the music is loud, the lights are low, and the drinks are cheap. It’s a homey atmosphere and many in the crowd are regulars who drink Jägermeister shots as they listen to the band; the roster features local acts from metal to jazz.

The owner, 36-year-old Sada Hasanova, helped start Le Chateau in 2015. A classically trained musician, she had no experience running a bar. But she was frustrated by the lack of options in Baku. “People like me, who want to get a drink that’s not too expensive and listen to music – there was nothing here for us,” she told Eurasianet. Since it opened, she said, people who met at the bar have even formed their own bands. “That’s what connects the people who come to Le Chateau.”

Over the last several years, the Azerbaijani government has used its substantial oil and gas wealth to remake Baku into a swanky Dubai-on-the-Caspian. The effort has transformed a large swath of central Baku. From the remade seaside promenade and the thoroughly scrubbed old walled city to Fountain Square and the pedestrian Nizami Street, the center is thronged with tourists and evening strollers.

But just adjacent to that zone, another transformation has taken place. Over the past five years or so, a scruffy, hip neighborhood of cafés, pubs and creative spaces has sprung up just north of Fountain Square in a yet-unnamed neighborhood centered around Islam Safarli Street and encompassing Baku’s old Jewish district.

The new enterprises include wine bars, coffee shops, live music venues, nightclubs, jazz bars, and “anti-cafés” where patrons pay to sit but can bring their own food or drink as they read or work. The area is thriving in spite of a multi-year economic crisis in Azerbaijan, and it has fostered a sort of independent creative renaissance in Baku that has attracted former emigres to return home.

“New successful enterprises are encouraging other new initiatives,” said Baba Aliyev, the founder of Old School, a café/bar just a few blocks from Le Chateau with a vintage Soviet décor. “This is the first stage of a new era.”

It wasn’t long ago that Baku had only a handful of cool places to hang out, of the sort to which young people in Europe – and closer to home, Tbilisi – had long been accustomed. There would be little choice but to gather in parks in the summer, or the cheapest teahouses they could find in the center.

That began to change around 2013, connected to the country’s worsening political environment: Several of the first cafés and bars in the area were opened by former political activists who gave up that work as Azerbaijan’s repressive atmosphere became too difficult to manage. But since then the profile of these new owners and managers has shifted, and they are more apolitical.

“There are social, political and economic problems in Azerbaijan, so creating new things isn’t always easy,” said Yashar Polad, one of the founders of Çıxış, a vegetarian cafe in the neighborhood where there is no menu and customers determine the prices they want to pay. The new creative spaces have emerged “as the result of more and more individual initiatives,” he said. “It doesn’t have anything to do with fundamental changes in the country.” (Since this interview, Çıxış has closed temporarily and it’s not clear when it will reopen.)

Azerbaijan has been suffering a brain drain of young, ambitious people who see little opportunity at home. But anecdotal evidence suggests that the appearance of new spaces where creative people can feel at home is not only keeping young people in Baku, but drawing some emigres back.

Some of the returnees are themselves opening up new ventures. Araz Pashayev, 25, recently moved back to Baku after four years in Germany. On his return he opened the Kotti Bar, inspired by the places he got to know in Berlin. (The name comes from the Kottbusser Tor district there.) The basement bar has a style that Pashayev calls “anti-glamour.”

“I've come to understand one thing: that if someone feels comfortable somewhere, all the arguments against it don’t matter,” he said. “People make Baku interesting for me. I find people sincere here. There are unopened pages to develop. There are gaps to fill in.”

Twenty-eight-year-old photographer and artist Emin Mathers also recently moved back to Baku after several years in Prague and Istanbul. “The main lesson moving abroad taught me was that wherever you go, you take yourself with you. If your mood isn’t good, moving from the table to the couch doesn’t change anything,” Mathers said.

Back in Baku, Mathers and a friend renovated a 19th century building and in 2017 opened it as the ZION youth hostel, which not only provides beds for backpackers but open-air film screenings, literature and poetry nights, music performances, master classes and artist talks for both foreigners and locals.

“If there is something that you want and don’t have, then you are really happy, because there’s something new you can bring to society,” he said.

Not all of the new enterprises in this movement are located in the same neighborhood. İN, in Baku’s suburban Third Microdistrict, is the city’s first electronic music club. The club opened in 2015, after several abortive attempts at other clubs around Baku. This version – in an abandoned paper factory– has caught on.

“Our friends abroad were always asking why we stayed in Baku,” said Natig Ismayil, a 32-year-old marketer and one of the founders of İN. “We wanted to achieve some changes in this society.”

The club now has space for 800 people and regularly features foreign acts. In December one of Europe’s biggest DJs, Abdulla Rashim, is slated to perform.

And there are plans for expansion. “This space is going to be hub for young people,” Ismayil said. “There will be other activities, like second-hand shops, a vinyl store and so on. We want to create an alternative Baku, where young people can come together, exchange ideas, create new ideas.”

“IN is going to be among the top 10 techno clubs in the world,” he said. “All our guests say that we’re on the right track.”