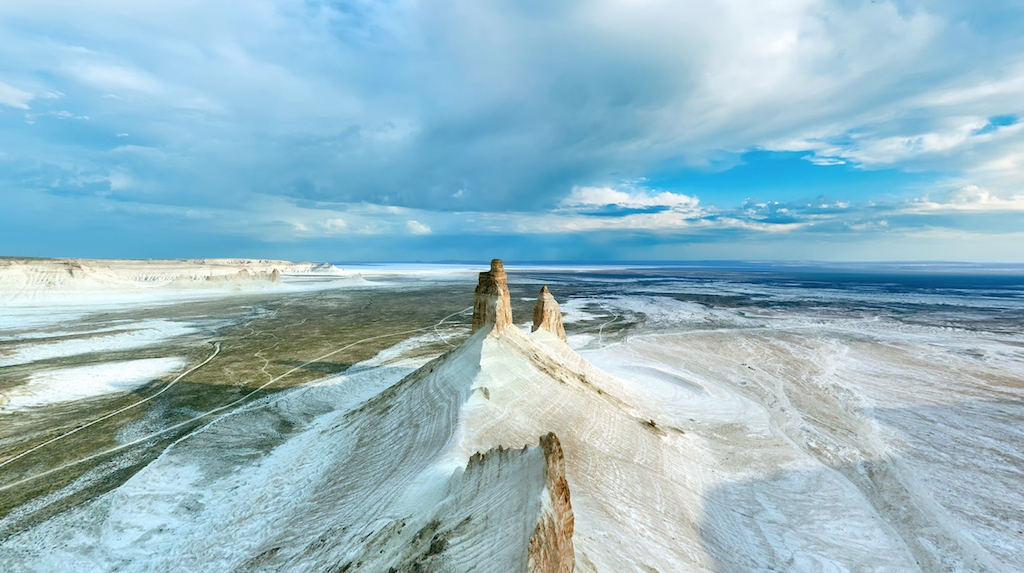 Developers aspiring to super-charge Kazakhstan’s tourism sector often struggle to find ways of doing so without spoiling the very things that might draw visitors in the first place.

An ongoing battle of wills over plans to build a luxury hotel near one of the country’s most striking natural features is a case in point.

It is not for nothing that images of the Bozzhyra escarpment, a pair of towering, rocky fingers in the heart of the Ustyurt Plateau in the western Mangystau region, are featured in so much of Kazakhstan’s tourism literature. The appeal of the 200-meter-tall formation, dubbed by some as “sugar castles,” lies precisely in the secluded desolation of the setting.

Which all makes talk of investors erecting a so-called “safari hotel” slap in front of the chalky outcrop particularly worrying. Mangystau regional government revealed back in November that the same people behind the construction of a Rixos Hotel on a beautiful spot along the Caspian shore, south of the oil city of Aktau, are already busy at work designing a resort that they say will “fully meet the requirements of green technology.”

Environmental activist Azhar Dzhandosova has now initiated a petition against a development she says fails to “adhere to the principle of minimal environmental impact.”

“We are against the transformation of Bozzhyra into a place killed by mass and uncontrolled tourism, as well as against it being turned into a haven for the elite,” read the appeal, which had drawn almost 7,000 signatures as of February 12.

The authorities, in the person of Ecology, Geology and Natural Resources Minister Magzum Mirzagaliyev, had tried to soothe irritation in December by stating that in accordance with the wishes of residents of the Mangystau region, the planned development would be moved beyond Zhabayushkan reserve, within which the Bozzhyra escarpment stands.

With ineluctable predictability, Mirzagaliyev’s pledges turned out to be worth very little.

When initial foundation-laying work started in January, it was a mere 500 meters away from the original planned site.

“The presence of a hotel will lead to the loss of the pristine beauty of Bozzhyra, cause irreparable damage to the biosystem and the natural and historical value of the tract, and destroy its attractiveness to visitors,” the appeal attached to the anti-hotel petition reads.

The Association for the Conservation of Biodiversity of Kazakhstan says going ahead with the project could endanger wild sheep, gazelles, and caracal wild cats populations that now inhabit areas with next-to-zero human presence. Passing cars may also damage vulnerable soil beds.

The intended exclusivity of the resort also grates. Local photographer Konstantin Kikvidze questioned how many visitors would be able to afford to stay in a high-end Rixos Hotel.

“Out of every 100 people, maybe no more than one,” he wrote. “And for this miserable percentage, the people who decided to go ahead with this construction want to despoil a unique view and deprive the majority of those who visit of the sensation that they came seeking in Bozzhyra.”

Kazakhstan has been down this road before – not that any lessons have been learned.

It was only in October 2019, after many years of vocal campaigning, that President Kassym-Jomart Tokayev finally caved to public pressure and called time on the idea of developing Kok-Zhaylau – a beloved and pristine spot in the Ile-Alatau national park – into a ski resort.

The distance of Bozzhyra escarpment from cities like Almaty, where most of the country’s civically conscious and active communities tends to reside, probably means it will not get as much attention as Kok-Zhaylau, however.

Anybody able to get to Kazakhstan in the near term should seize the opportunity before developers have time to destroy more of the country’s delicate natural legacy.