How Strong Is Russia’s Soft Power in Georgia? 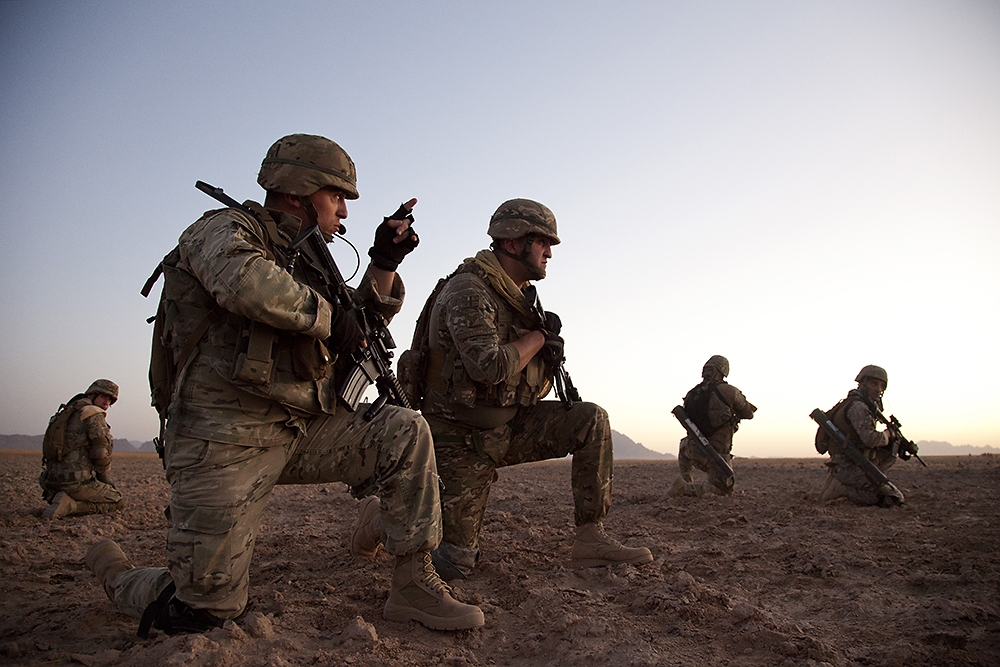 Georgian soldiers assigned to a US battalion patrol in Afghanistan’s Helmand province in July 2013. Although not yet a NATO member, debate over joining the Western military alliance has some parliamentarians questioning whether closer economic integration with Russia might be better. (Photo: Cpl. Alejandro Pena/US Marine Corps)

Few Westerners doubt the South Caucasus country of Georgia’s commitment to eventual integration with Europe. But as a massive currency devaluation tightens the squeeze on Georgia’s relatively fragile economy, calls are increasing for ordinary Georgians to reconsider the actual benefits of that commitment.

Increasingly, the objections target the North Atlantic Treaty Organization (NATO), which expects to have a training center in Georgia by the end of the year. Amidst the war in Ukraine with Russian-backed separatists, that, perhaps, comes as no surprise.

But the complaints run parallel with an economic argument, one that focuses on the supposed advantages of greater trade with Russia or the Russia-led Eurasian Economic Union, and what Georgia, after seeing its currency lose 30 percent of its value against the dollar earlier this year, needs to do to survive.

Earlier in March, 74-year-old parliamentarian and influential beer baron Gogi Topadze broke ranks with his colleagues from the ruling Georgian Dream coalition to denounce NATO integration and ballyhoo the Eurasian Union. His comments, seen as pro-Russian, sparked calls for a boycott of the beer company he founded, Kazbegi, an exporter to Russia.

Topadze, in a later interview with Rustavi2 television, expressed support for Georgia’s 2014 association agreement with the European Union, but noted that “the talk today is about the economy, and exports-imports.”

He indicated that NATO, as a military bloc, would only make Georgia vulnerable.

Parliamentary Defense Committee Chairperson Irakli Sesiashvili stressed to EurasiaNet.org that Topadze does not speak for the government, and that “Euro-Atlantic integration is a one-way ticket.” But he conceded that a growing anxiety exists in society about the West’s reluctance to offer Georgia more than promises of integration.

“We see what is happening in Ukraine and Moldova, and are seeing the same process in Georgia,” Sesiashvili said.

The Erekle II Society, a non-governmental organization named in honor of the 18th-century Georgian king who put Georgia under Tsarist Russia’s protection, claims it has gathered “15 to 19 NGOs” to push for a fresh referendum on joining NATO. (A 2008 non-binding referendum expressed more than 70-percent support for NATO membership.)

Among those NGOs is the Tbilisi-based Institute of Eurasia, funded by unnamed “Georgian-Russian businessmen” in 2009, one year after Georgia’s war with Russia.

Institute Director Gulbaat Rtskhiladze insists, though, that “Russia is not using us” in the campaign for a referendum on NATO.

“I’m doing this to protect Georgia’s interests,” he said.

Polls commissioned by the National Democratic Institute and the International Republican Institute that show support for NATO membership cannot be trusted because they represent American geopolitical interests, Rtskhiladze added.

Outside of the Georgian capital, Tbilisi, where he claims he regularly travels, Rtskhiladze asserted that people instead want better Russian-Georgian relations.

Georgia’s NATO plans, he alleged, only prompted breakaway South Ossetia to close its markets to goods from farmers living in Georgian-controlled territory. By contrast, he continued, farmers in the agricultural hub of Kakheti, which borders on Russia, are prospering from Russian sales.

The Russian economic crisis and Russian forces who helped seal South Ossetia off from Georgian-controlled territory may contradict that message, but its appeal persists for many.

Nearly nine months after the EU association agreement, some Georgians question what they have to show for their closer ties with the West. A liberalized visa regime with the EU does not translate into jobs. NATO does not mean security.

“Europe is far away, how can they help? … We see Europeans freely coming here, opening businesses, making money, but we cannot go there and do the same,” complained 54-year-old Tbilisi taxi driver Nika Javakhishvili. “But Russia is different. We could go there freely if the border was open. How much longer must we wait – 30, 40 years for that to happen?”

The issue boils down to realism, underlines Nino Burjanadze, a onetime ally of avidly pro-Western ex-president Mikheil Saakashvili, and the current leader of the opposition party Democratic Movement - United Georgia.

“How can we be in NATO if Russia is on our territory?” Burjanadze scoffed, in reference to Russian troops in breakaway Abkhazia and South Ossetia. “Why are we still talking about it when [US President Barack] Obama has said there is no possibility? …”

Her message appears to be gaining ground.

Though Burjanadze’s poll ratings slumped to about one percent after a 2010 meeting in Moscow with then Prime Minister Vladimir Putin, roughly ten percent of Georgian voters backed her 2013 presidential bid. Her party posted a similar showing in last year’s local elections.

Detractors often cast Burjanadze and likeminded Georgians as Kremlin proxies, but Alexander Rondeli, president of the Georgian Foundation for Strategic and International Studies, a Tbilisi think-tank, notes that the absence of “tangible achievements on the road to the EU and NATO” could indeed be influencing public opinion about how Georgia should relate to Russia.

The Kremlin exploits this, he reasons, by putting greater effort into soft power structures, which depict the West as “bad, sinful, filthy,” and hostile to “our traditional values.”

Some such depictions backfire, however. A former local government official who was photographed bare-chested in the snow with a Russian flag as part of an appeal to Putin to “rescue” Georgia attracted more mockery than sympathy – particularly among younger Georgians, who tend to see themselves as European.

In response to those who do not, said the Georgian Dream’s Sesiashvili, the government can only respect the right to freedom of speech.

“We are not happy to see people lobby for Russian interests, but we cannot arrest people for that,” he said.