The labor migrants are trying to return home after losing their jobs in the coronavirus pandemic. Tensions are rising, and a protest on the border has been violently broken up by Russian police. 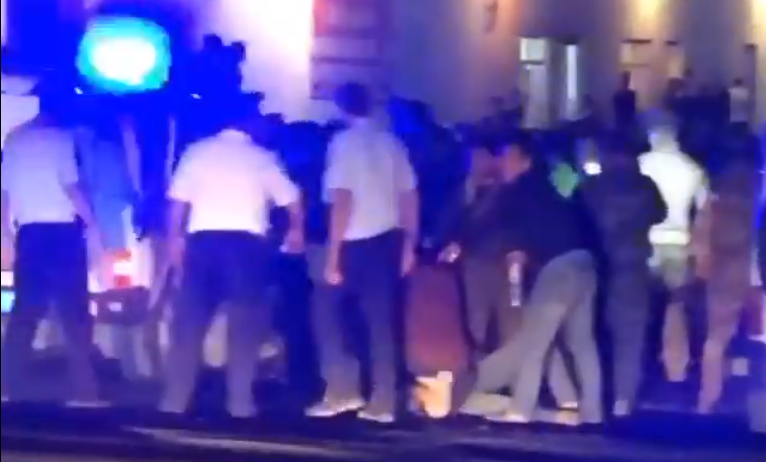 For weeks, hundreds of Azerbaijani labor migrants who lost their jobs in Russia due to the coronavirus pandemic have been gathering at the land border between the two countries, trying to return home.

Frustrations over the slow pace of the repatriation blew up on the evening of June 15, with the Azerbaijanis staging a protest and Russian police breaking it up with tear gas and bludgeons.

The border, in Russia’s republic of Dagestan, has been closed since March 18.

But Azerbaijanis from across Russia who have lost their jobs have been massing at the border, demanding to be allowed to return home. While some have been let in, others continue to arrive at the border. Some have been staying in a tent village set up by the Dagestani authorities and others setting up their own informal tent cities, particularly in the village of Kullar in the Derbentskiy region. Others had been gathered in another area, the Magarramkentskiy district, but all of those have left, local authorities said.

Things came to a head on the evening of June 15, when the Azerbaijani migrants were told that the crossing would be opened, but for only 240 of the 600 who were then at the border. A list of names of those who would be allowed to cross was produced, “but the list had less than half of the people who are on the border,” one of the migrants there told the Azerbaijani news agency Turan. “Many people were furious that some of the people on the list had arrived here only recently.”

Migrants in Kullar organized a protest, and the Russian police cracked down, using tear gas and firing their guns into the air. About 50 protesters were injured, Turan’s source said. A total of 93 were detained, a law enforcement source told the Russian news website 360tv.ru. Journalist Habib Muntazir reported that two protesters had died, but that had not been officially confirmed.

“The government needs to make an official statement about our citizens who are being kept at the border and not allowed into the country. This is an unjustified restriction on movement, this problem must be solved soon,” Azerbaijani analyst Anar Mammadli wrote on Twitter.

Erkin Gadirli, a semi-independent member of parliament, wrote on Facebook that the government needed to take action and refusing to open the border was a violation of the constitution.

The Azerbaijani government had previously warned its citizens against gathering at the border, saying that citizens would be repatriated according to a schedule, gradually, and that there was no need to wait physically at the crossing.

“I ask you not to go to the border, you can get sick there. In this case, we cannot help you. I understand that this is difficult, but you have to wait. There is no other option,” said Azerbaijan’s ambassador to Russia, Polad Bulbuloglu, on April 12.

Abdullayeva repeated that warning following the protest and crackdown.

RIA Novosti reported, citing an unnamed Russian diplomatic source, that a delegation of Azerbaijani officials was traveling to Dagestan to help sort out the situation.

This was not the first protest action that the migrants had organized.

On June 3, about 60 protesters staged a hunger strike at the unofficial camp in Kullar after 210 of the 619 who were then massed on the border were repatriated. The hunger strikers demanded that all the Azerbaijanis be allowed back home and accused Baku of being indifferent to their plight.

“People are tired of waiting, they are demanding that [the authorities] hurry up the procedure of crossing the border. People want to go home,” Asim Taghiyev, who had been waiting on the border since May 10, told Caucasian Knot.

The hunger strike ended six days later when an additional 130 citizens were repatriated.

Aliyev said on May 19 that the government was working to repatriate all its citizens who want to come back, but that “we can’t do this haphazardly.”

The repatriation had to go gradually because spaces for quarantine were limited, said Ibrahim Mammadov, the spokesman for Azerbaijan’s cabinet of ministers on May 29.

“There are conditions to bring 200-500 people per week from Russia, Turkey and [other countries] to Azerbaijan and place them in quarantine zones. As the quarantine zones are emptied, people are repatriated. This procedure will continue until the borders are opened and flights are restored.”

Six Azerbaijanis in Dagestan had tested positive for COVID-19 as of June 5, reported the Central City Hospital in Dagestan’s capital of Derbent.