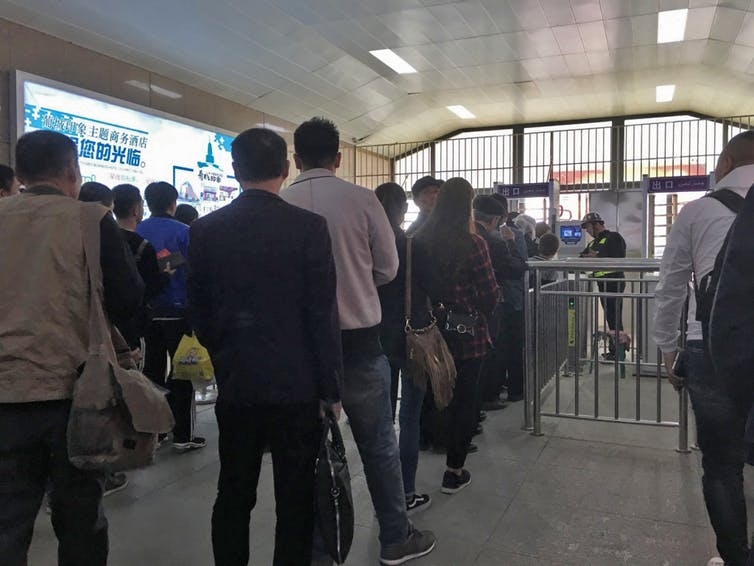 Uighurs wait in line at a face scan checkpoint in Turpan, Xinjiang, in northwest China on April 11, 2018. Darren Byler)

Originally published by The Conversation

The Uighurs, a Muslim minority ethnic group of around 12 million in northwest China, are required by the police to carry their smartphones and IDs listing their ethnicity.

As they pass through one of the thousands of newly built digital media and face surveillance checkpoints located at jurisdictional boundaries, entrances to religious spaces and transportation hubs, the image on their ID is matched to their face.

If they try to pass without these items, a digital device scanner alerts the police.

But even complying with the rules won’t necessarily keep them out of trouble. During random spot-checks the police at times demand that an individual hands over their unlocked phone which the police then examine manually or plug into a scanner.

I did ethnographic research with Han and Uighur migrants for more than 24 months between 2011 and 2018 in Xinjiang Uighur Autonomous Region, in northwest China. During this period, I was affiliated with the Xinjiang Arts Institute. My position allowed me to interview hundreds of Han and Uighur people.  I read and speak both Uighur and Chinese so I was able to communicate with people in their own language.

When I first began my research in the region, smartphone use was not that tightly controlled by the police. But by 2018 it had became common knowledge among my Uighur interviewees that if they did not carry their phone with them or failed to produce it they could be detained.

The Uighur majority areas on the border of Central Asia only became a fully integrated part of China in the 2000s. They were effectively colonized when millions of non-Muslim Han settlers moved into their community in the 1990s and 2000s to extract natural resources such as oil and natural gas.

Earlier they lived much more autonomously in desert oasis towns and villages much like the Uzbeks in Uzbekistan, a group that shares a similar history and language as the Uighurs.

In 2011, the Chinese government built 3-G networks in the Xinjiang Uyghur Autonomous Region.  Cheap smartphones soon became available in local markets of this region and Uighurs began to use the new social media app WeChat.

WeChat, which is owned by the Chinese company Tencent, was put into general use across the whole country in 2012 after Facebook and Twitter were banned in 2009.

Smartphones became a common feature of daily life for millions of Uighur villagers. At the time, the way Uighurs used them was unique. In other parts of China, the Chinese language was used in social media communication. Uighur uses Arabic script – radically different from the character based Chinese – and acted as a form of coded speech that state censors couldn’t understand.

When I began my research project,  I was interested in the way online culture produced forms of Islamic, Chinese and Western identity and the way it brought people of different ethnicities together. 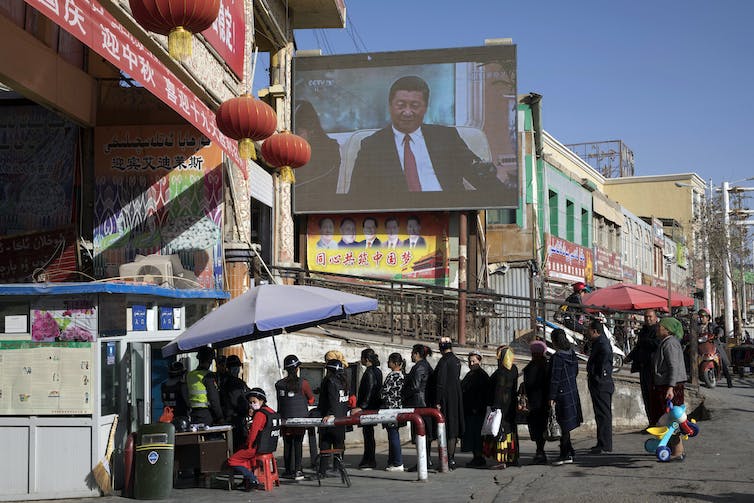 I found that Uighurs used smartphones differently than other internet users. On traditional internet sites that required text-based communication, Uighur web users faced tighter forms of censorship  since state authorities viewed them as potential terrorists. They were viewed this way since Uighurs had long protested the way their briefly independent nation had been subsumed by China and their religious practices were restricted, lashing out violently at times.

Initially Chinese state authorities did not have the technical capabilities to monitor and control Uighur oral speech or Uighur text embedded in images as memes. They could turn the Uighur internet on and off, but they could not fully regulate what Uighurs said because they spoke in another language.

Based on hundreds of interviews and my own observations Uighurs used these forums to discuss cultural knowledge, political events and economic opportunities outside their local communities.

Over the course of only a few years, online Islamic teachers based in the region and elsewhere in the Islamic world, in places like Turkey and Uzbekistan, became influential throughout Uighur social media. Their messages focused primarily on Islamic piety. They described what types of practices were halal, and how people should dress and pray.

According to scholars Rachel Harris and Aziz Isa the vast majority of those who began to study Islam by smartphone were simply interested in instruction on what it might mean to be a contemporary Muslim, something they felt was lacking in government-censored state-run mosques.

The Uighur internet as a space of surveillance

They regarded the Islamic appearance and practice of Uighurs, such as young men growing beards and praying five times per day, as signs of what state authorities described as the “extremification” of the Uighur population.

They began to link violent incidents, such as a suicide attack  in the city of Kunming in Eastern China, to what government officials told me was the “Talibanization” of the Uighurs.

In response to this Chinese authorities declared what they called a “People’s War On Terror.” They began to use techniques of counterinsurgency, a mode of military engagement that stresses mass intelligence gathering, to assess the Uighur population.

As part of this process, in 2016, they began to collect biometric data, such as DNA, high-fidelity voice recordings and face scans, from the entire population of the region in order to track the activities of people on WeChat and in their daily lives using their voice signature and faceprint. 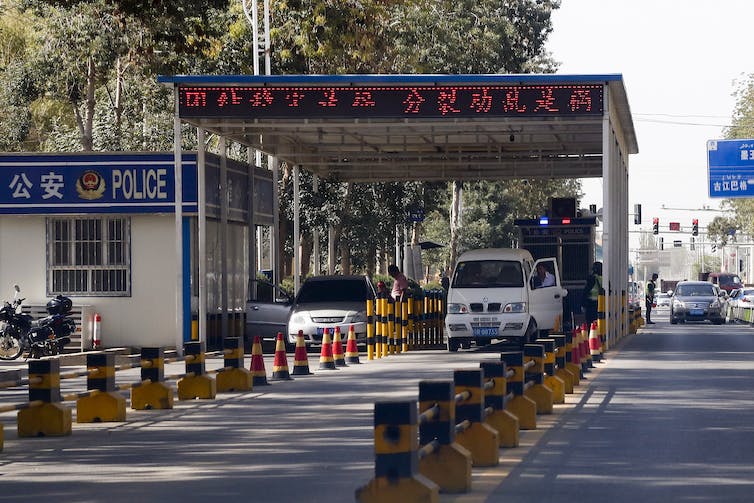 In a September 2018 photo, Uighur drivers have their vehicles checked at a police check point in Hotan, in China’s Xinjiang region. AP Photo/Andy Wong

They also began a process of interviewing millions of Uighurs and other Muslim minorities to determine who could be categorized as trustworthy or “normal” as stated on official population assessment forms.  In order to determine this, state authorities mapped out the person’s social network and history of Islamic practice, both in their local community and online.

Since the total Muslim population of the region, including other Muslim groups such as the Kazakhs, Hui, Kyrgyz, Tajiks and others, is around 15 million, these assessments and activity checkpoints required the deployment of more than 90,000 police officers and more than 1.1 million civil servants.

The majority of the security forces are of Han ethnicity. Han people are settlers in the Uighur region. They are not Muslim, they do not speak Uighur, and many of my Han interviewees described the Uighur culture as “backward,” “primitive,” or even “dangerous.”

In order to aid in this assessment process, state authorities also contracted with Chinese private technology firms to develop software programs and hardware that could comb through the images, videos and speech recordings in the WeChat histories of a targeted person in a matter of seconds.

The Uighur internet as a trap

Through this process around 1.5 million Uighurs and other Muslims were determined “untrustworthy” and scheduled for detention and reeducation in a massive internment camp system.

Government procurement records show that the camp facilities have “no blank spots” outside the vision of surveillance cameras and that the camp workers are often armed with tasers and other weapons.

In the prison-like camps the detainees were held in crowded dormitory cells where they studied Chinese, learned the political thought of Xi Jinping, the General Secretary of China’s ruling political party and confessed their past crimes. In many cases, these crimes were related to their internet use.

Since more than 10% of the adult population has been removed to these camps, hundreds of thousands of children have been separated from one or more of their parents. Many children throughout the region are now held in boarding schools or orphanages which are run by non-Muslim state workers.

Today the Uighur internet has begun to merge with the Chinese internet. Uighurs are discouraged from writing or speaking in Uighur or celebrating Uighur culture.

Instead Uighurs often post statements written in Chinese attesting to their loyalty to the Chinese state.

As my research shows, the Uighur internet has been transformed from a space that fostered a cultural flourishing for Uighurs into a space that controls many aspects of their lives.

In the past, it was a place where Uighurs published short films, poetry, art and music.  They critiqued police brutality and defended the social mores of Uighur society against conspicuous consumption and economic corruption.

During my last trip to the region in 2018, my Uighur interlocutors told me  that the Uighur internet had become a “trap,” or a “qapqan” that they cannot escape.

Darren Byler is a lecturer in Anthropology at the University of Washington.