ICG: Russian Military Settling In For Long Haul In Abkhazia 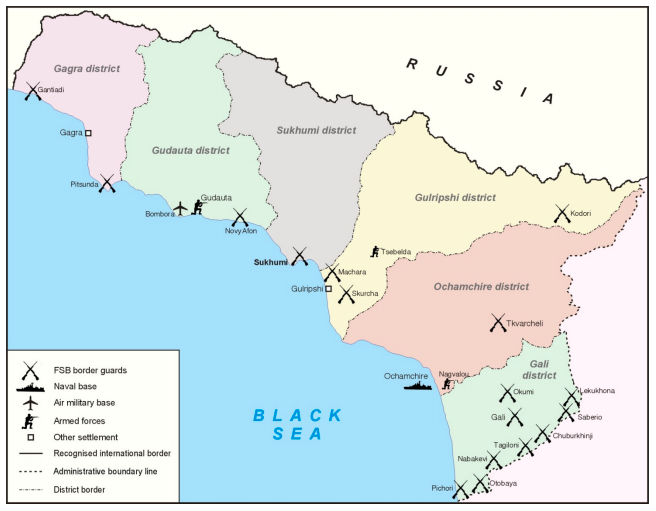 Russian Military Presence in Abkhazia, as of 2013

Russia is building up its military presence in the breakaway Georgian territory of Abkhazia in a way that suggests that Moscow anticipates a long-term presence there, according to a new report by the International Crisis Group. As is often the case with ICG reports, the whole thing (pdf) -- titled "Abkazia: The Long Road To Reconciliation" is worth reading. But Bug Pit readers will be especially interested in the details it provides on Russia's current military posture in Abkhazia:

The 2008 war with Georgia allowed Russia to greatly enhance its already considerable military presence. Russian officials say there are roughly 5,000 Russian personnel in Abkhazia: 3,500 military and 1,500 Federal Security Service (FSB) officers and “border guards”. Moscow allocated $465 million over four years to the rehabilitation and construction of military infrastructure. This included work on Bombora, the largest military airfield in the South Caucasus, in Gudauta. Though Russian media sources describe significant weapons at the base, Western military officials in late 2012 said intelligence indicated only four fighter craft there on a regular basis – two Sukhoi 27s and two MiG-29s.

The Russians also refurbished a smaller, though strategically and symbolically important naval port in Ochamchire, just 30km from Georgian-controlled territory. Eight Russian “border patrol” boats are reportedly there – including two new craft that arrived in 2012. According to FSB officials, they likewise set up several radar stations along the coast to cover Abkhazia’s “territorial waters” and monitor areas under Georgian naval control.

And the report's authors make some interesting on-the-ground observations about Russia's apparent intention to stay long-term in Abkhazia. They are building some impressive new apartment buildings for their soldiers, and Russian soldiers serving in Abkhazia are eligible to stay there after their service and even to become Abkhazian citizens. Still, Russia's military presence is fairly low-profile, probably in respect of the uneasy feelings that Abkhazians have about their dependence on Russia:

There are clear signs Moscow plans to stay in Abkhazia indefinitely. Not far from the centre of Sukhumi are several recently completed, well-built twelve-storey apartment buildings for Russian officers serving in the entity. They are a stark contrast to aging Soviet-era apartment blocks nearby, several still burned out or with bullet-pocked exteriors left over from the Georgian-Abkhaz war two decades ago. Russia has also erected several sparkling new compounds – military-function bases as well as new apartments for troops – in the ethnic Georgian Gali district, in some cases just a kilometre from the administrative boundary. About 2 km from the centre of Gali town, a new, upscale-looking ten-storey residential compound for Russian military personnel and their families has gone up. It towers over a neighbourhood of mostly rundown Georgian-style houses, with their typical large gardens, wandering cows and mandarin orange groves. Many were long ago abandoned by fleeing Georgian IDPs and subsequently looted or torched. A five-metre-high cement security wall topped with thick rolls of razor wire and several dozen security cameras surrounds the Russian complex, inside which there is a brand new Russian Orthodox chapel with a gleaming gold cupola.

“We were surprised by the thickness and depth of the concrete foundations they laid for these buildings, as if they were meant to withstand an atom bomb blast”, said a Gali local, adding that “it’s obvious the Russians plan to stay here for eternity”. Further reinforcing the sense of permanence, Russian officers and their families are eligible for Abkhaz citizenship upon completion of service there, as well as the right to retain their state-provided apartments. They are the only group allowed dual citizenship under Abkhaz laws.

The thousands of Russian troops tend to keep a low profile in major towns. In the course of a week’s visit to Abkhazia and hundreds of kilometres of travel, Crisis Group encountered only a few Russian “border guards” at the administrative border line (ABL) and a lone military cargo truck. Some locals said this may be a deliberate strategy, probably designed to minimise incidents or creation of an “occupation atmosphere”. At the same time, given its control over Abkhazia’s “borders”, roads and sea, Russia need not maintain a heavy permanent presence, as it can move military equipment and troops into and out of the entity at will.

The report also includes good discussions of the threat of Islamist terror groups in Abkhazia (and perception thereof) and allegations of Georgian government-sponsored skullduggery in the Gali district.

Underscoring the report's observations, Russian foreign minister Sergey Lavrov said on Thursday that while he hopes for better relations with Georgia's new government, recognition of Abkhazia and its fellow breakaway territory of South Ossetia are "irreversible."