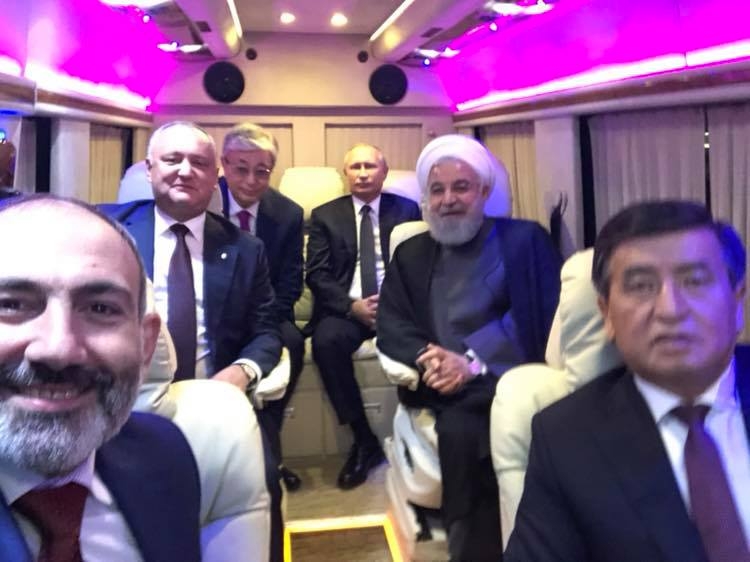 What happens when the club of authoritarian states meets in the home of the “Velvet Revolution”?

The last time the heads of state of the Eurasian Economic Union met, in May in Kazakhstan, Armenian Prime Minister Nikol Pashinyan was conspicuously snubbed. Many interpreted his chilly reception as evidence that the new Armenian leader’s route to office – popular street protests that overthrew an authoritarian government – was a bit uncomfortable for the group’s other leaders, from Belarus, Kazakhstan, Kyrgyzstan, and Russia.

But when the EAEU convened next, on October 1, it was Pashinyan’s turn to host. And this time they played by his rules, exemplified by one of the PM’s signature selfies that instantly went viral across Eurasian social media.

Up until his plane touched down it was not certain whether the EAEU’s most prominent leader – Russian President Vladimir Putin – would show up at all, given the amount of bad blood alleged to exist between him and Pashinyan. Ahead of the visit, anti-Pashinyan and Russia-friendly Armenian media made much of Putin’s dissatisfaction with the fact that his friend, former president Robert Kocharyan, is in jail awaiting charges in relation to the violent breakup of protests from his time in office.

But Pashinyan and Putin appeared to get along swimmingly. By the end of the day Pashinyan escorted his Russian counterpart back to his plane and even gave him a hug goodbye.

“I had another one-and-a-half hour meeting with the Russian president at Zvartnots [the Yerevan airport],” Pashinyan posted on Facebook afterwards. “Armenia-Russia relations are on a reliable and positive track.”

Putin, too, had only kind words. “There was not a single setback,” he told Pashinyan at a one-on-one meeting. “On the contrary, all agreements between EAEU members have been reached. You have done everything you could for this productive work.” Following the meeting he invited Pashinyan to Moscow for a state visit.

As is usually the case with the EAEU, concrete news from the summit was scant. Moscow and Yerevan are in the middle of difficult negotiations over the price of gas that Russia sells Armenia and Iranian President Hasan Rouhani – who was there to iron out a free trade agreement with the EAEU – suggested that Iran and Armenia could expand their gas and other energy trade. Singapore’s prime minister also joined the summit, where he signed a free trade pact with the group.

In the absence of big announcements, much of the importance of the visit was about symbolism. Pashinyan took his guests to the country’s Tumo technology education center, a showcase for the tech-driven future Armenia sees for itself.

But it was a selfie taken by Pashinyan on a minibus, along with several counterparts – including the rarely selfied Putin and Rouhani – that seemed to be the biggest news from the summit. It was naturally instantly and widely memed; one had Putin saying “Driver, make a stop at Izmirlyan,” the hospital where Kocharyan was being treated.

There was much speculation ahead of the summit that Putin would take the opportunity to drop in on his old friend, Kocharyan, which would have been an overt snub to Pashinyan, the ex-president’s political rival. While such a meeting never happened, Putin did meet with Kocharyan’s wife at the Russian embassy, his office told local media.

Pashinyan alluded to the difficult alliances he inherited during his speech last month at the United Nations General Assembly. “We face a persistent risk of not being correctly understood by some of our friends – or even worse, by all of them.”

But his performance at the summit drew praise from his non-Eurasian friends as well. The French ambassador to Yerevan, Jonathan Lacote posted on Facebook: “Armenia's Multi-vector diplomacy ?? illustrated in selfies (and with humor) by Nikol Pashinynan himself.”

Much of the public interest in the summit revolved around Putin, who last visited Armenia in 2016. There were sporadic protests at that time, as the then-opposition liked to paint the government of president Serzh Sargsyan as being too beholden to Moscow. Anti-Russia protests served Sargsyan’s interest, as well, as he was able to cite popular pressure at home to gain concessions from the Kremlin.

Under Pashinyan, that calculus has changed: the then-opposition is now the government and its supporters don’t want to further upset the rocky relations it has with Russia. Accordingly, protests against Putin appeared smaller than last time around.

But one group of human rights activists tried to picket the main government building, Baghramyan 26, demanding the release of Russian political prisoners. Police removed them from the scene to a nearby metro station.

One reporter from Georgian TV station Rustavi-2 showed up to shout a question at Putin about when Russia would withdraw its troops from Abkhazia and South Ossetia, the Moscow-backed breakaway Georgian territories, which caused a flurry of interest in the Russian media.

Meanwhile, a right-wing group, Veto, took the occasion to hold a rally against the Open Society Institute and its financier, George Soros, and to issue a warning to EAEU states about the groups’ alleged pernicious infiltration into the Armenian government.