In Armenia, rallies against Karabakh negotiations fail to gain traction

While few support concessions on Karabakh, efforts to mobilize against the government on the issue have so far been dominated by the discredited political opposition. 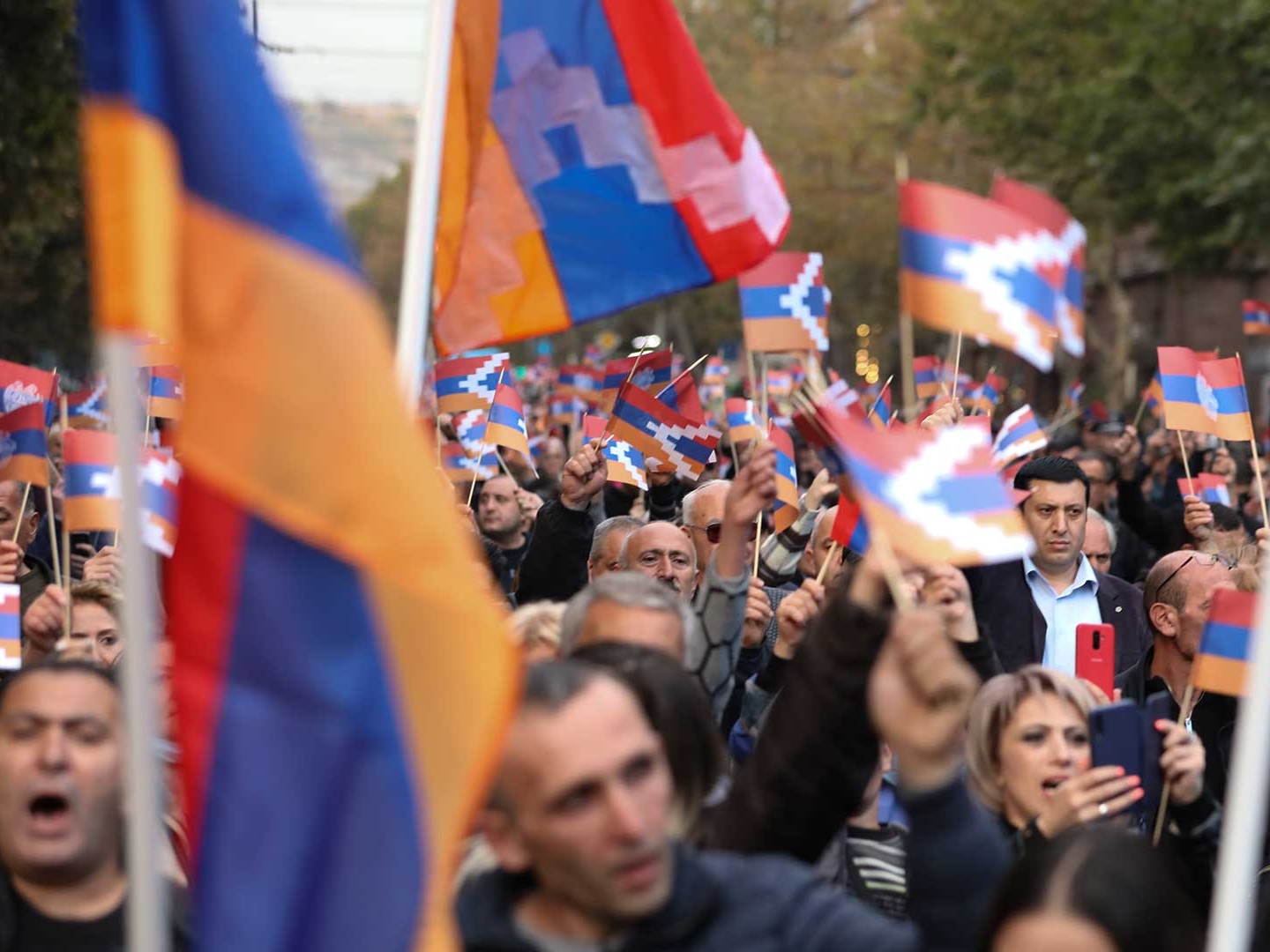 An Armenian opposition umbrella group staged a rally in Yerevan on November 5 against the likely signing of a peace treaty that will make substantial concessions to Azerbaijan on Karabakh.

But the demonstration turnout was relatively meager compared to one days earlier in Stepanakert, Karabakh’s de facto capital, on October 30, where residents vowed never to accept Azerbaijani sovereignty over the de facto independent entity.

The rally featured solemn trumpet music that evoked the Karabakh Movement that arose in 1988 and led to Karabakh claiming independence from then-Soviet Azerbaijan.

That was an obvious reference to the government of Prime Minister Nikol Pashinyan, which came to power in 2018 through street rallies and social media campaigns and is now in talks with Azerbaijan.

Ishkhan Saghatelyan, a member of parliament in the Armenia alliance, thundered against Pashinyan’s apparent readiness for concessions.

"No document that would limit Artsakh's right to self-determination can be signed and ratified. Such a document would be torn up by our people and be declared null and void immediately after the regime is changed," he said, adding that what Armenia needs is a new “top negotiator.” (Artsakh is an alternative Armenian name for Karabakh.)

Saghatelyan asserted that once the opposition gained power, it could secure “external support that would rule out vital concessions.” That was an apparent reference to the opposition’s hope for help from Russia, and possibly Iran as well.

Kocharyan, who is perhaps the most prominent opposition figure and is linked to key opposition media outlets, was present at the rally but did not speak.

About 6,000 people turned out for the rally, according to estimates based on drone footage, compared to around 40,000 for the demonstration in Stepanakert the previous week.

These numbers are remarkable considering Yerevan’s population is an order of magnitude greater than that of all of Karabakh.

The November 5 rally was also considerably smaller than the spontaneous protests that broke out in Yerevan on 13 September after Pashinyan first openly signaled he was ready for major concessions on Karabakh following Azerbaijan’s incursion into the territory of Armenia. No reliable turnout estimates for the September protests exist, however.

The notion that “Karabakh is Armenian” has been a central pillar of Armenian identity worldwide for decades. So why the unimpressive turnout at the pro-Karabakh rally in the Armenian capital?

Perhaps because the issue of the Karabakh negotiations has become closely tied to domestic politics.

Those politics have been a source of broad disillusionment and cynicism since the Armenian defeat in the 2020 Second Karabakh War, which saw Karabakhi Armenians retain only a sliver of territory under the protection of Russian peacekeepers with a five-year mandate.

Since then the Armenian opposition - led largely by elites who ruled the country from 1998 to 2018 - has failed to win society’s trust despite widespread outrage against the government.

They forced an election in mid-2021 that only renewed Pashinyan’s mandate. They then launched several campaigns of street protests aimed at ousting him, but all of them have sputtered out.

An IRI poll published in September found that 64 percent of Armenians don’t trust any politician. Pashinyan is the most trusted individual, with 16 percent - a paltry figure but one that still dwarfs Kocharyan’s 3 percent.

The widespread disenchantment is linked to the peace process with Azerbaijan, which offers little hope for an outcome favorable to Armenia.

The ongoing negotiations have been conducted on parallel, even competing, paths. One has been led by the European Union, with support from the United States, and the other by Russia.

Reports have emerged that a Russian version of the peace treaty envisages delaying the resolution of Karabakh’s status, and a continued presence of the Russian peacekeeping mission while the European version emphasizes the rights of ethnic Armenians inside Azerbaijan.

While Armenia would prefer the first option, it is not clear whether Moscow has either the will or ability to preserve Armenian control over Karabakh.

It is growing more and more evident that Pashinyan is trying to prepare the public for a surrender of that control.

“Unfortunately the international community, without exception, considers Karabakh to be a part of Azerbaijan, and this is evident in all documents,” he said on October 29.

His government has also taken up the line that Karabakh Armenians must deal directly with Baku to determine the terms of their future coexistence.

The polarized discourse on the peace process is mirrored in Armenia’s media scene.

Public TV generally toes the government line, portraying the challenges in the talks as insurmountable and seeking instead to hype the authorities’ domestic initiatives. The November 5 protest, for example, was given only brief mention sandwiched in between reports about social programs in Syunik and a corruption investigation.

In contrast, Channel 5, owned by an associate to Kocharyan and which seeks to whip up popular sentiment against Pashinyan’s willingness to “capitulate” over Karabakh, streamed the entire rally live.

While politicians in Yerevan attempt to downplay or exploit the painful concessions that likely lie ahead, Karabakhi Armenians face major upheaval in their day-to-day lives. Tigran Grigoryan, a political analyst and native of Karabakh, in an interview with RFE/RL on November 7 wondered: “Who is going to deal with the Karabakh issue if Armenia signs the peace deal, recognizes Azerbaijan’s territorial integrity? Azerbaijan will show that document to the international community and insist that Armenia also agrees that the conflict is over and there is nothing to discuss.”

He argued that Azerbaijan would then do its utmost to ensure the remaining Armenians leave in a process Grigoryan called “creeping ethnic cleansing.”