In Armenian elections, Karabakh is on the ballot

National security has dominated the rhetoric in the campaign so far, though the opposition has not been very specific on how it would tackle the country’s daunting challenges. 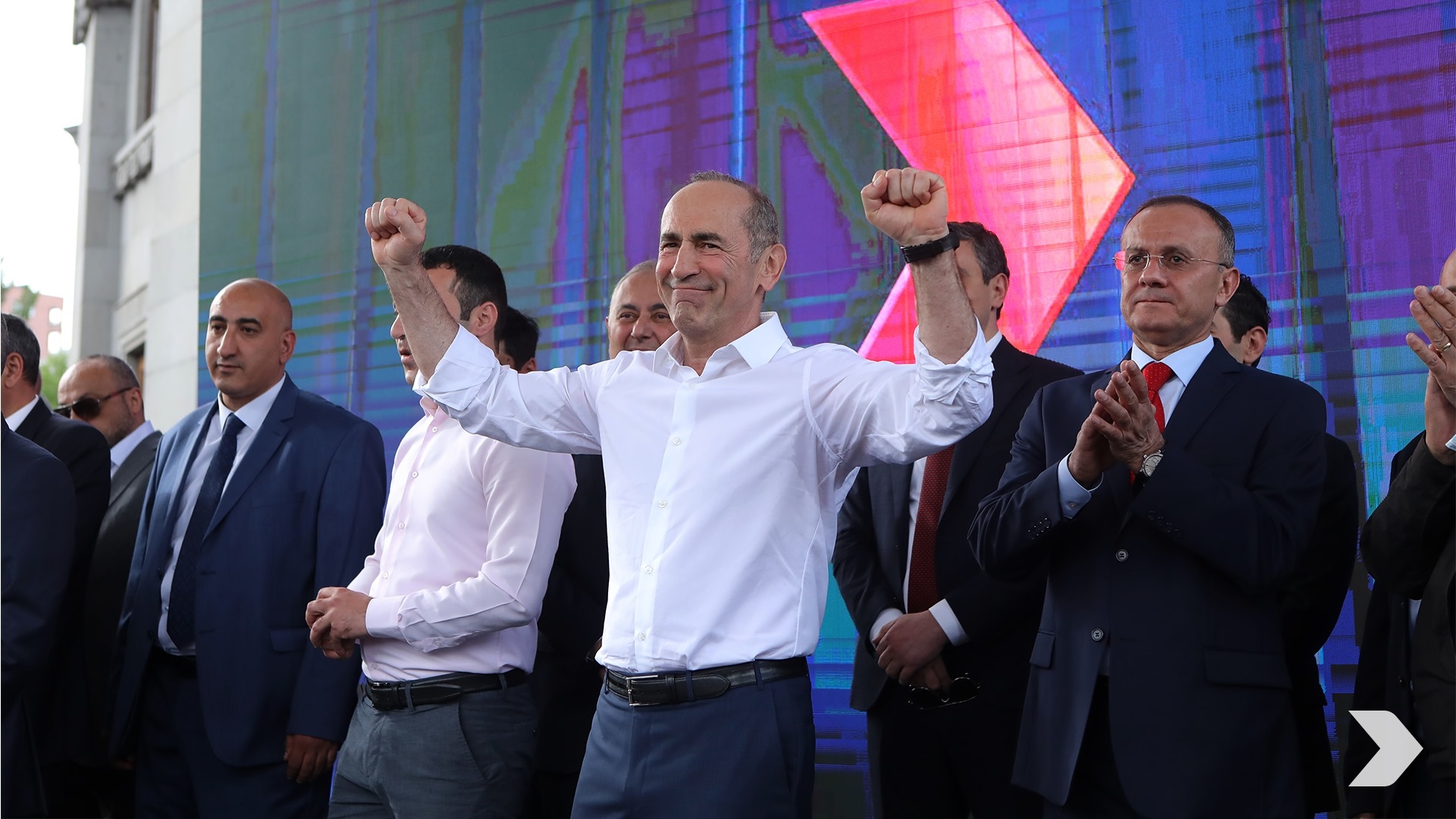 The last time Armenians went to the polls, in 2018, they were voting optimistically. Following Nikol Pashinyan’s successful toppling of the old regime via street protests, voters gave him an overwhelming mandate for what promised to be a future of growing prosperity, rule of law and a defeat of corruption, and reducing the country’s dependence on Russia.

Now, though, the picture is far more pessimistic.

Voters will head to the polls on June 20, in snap elections called amid a political crisis stemming from the country’s defeat in last year’s war with Azerbaijan. This time, the country is in survival mode and national security is dominating the campaign. The opposition is making promises that it will better be able to stand up for Armenia’s interests against a still-aggressive Baku, while Pashinyan and his ruling party are on the defensive and forced to make excuses for the defeat in the war last year.

“The disastrous outcome of the war is the weakest point of the incumbent prime minister and his political opponents will exploit it,” said Benyamin Poghosyan, head of the Yerevan think tank Center for Political and Economic Strategic Studies.

The former ruling Republican Party of Armenia, which Pashinyan ousted in 2018, is back and is in an alliance led by Artur Vanetsyan, a former head of the National Security Service under Pashinyan who then turned against his former boss. The coalition’s goal “is to liberate this country from the capitulant power that serves the interests of Turkey and Azerbaijan,” Eduard Sharmazanov, a senior party member, told reporters on May 18.

Also running is Robert Kocharyan, a former president of Armenia, in an alliance with the nationalist Armenian Revolutionary Federation – Dashnaktsutyun. “A government that represents defeat cannot be an effective negotiator,” Kocharyan told a May 9 rally in Yerevan. “It is impossible to negotiate with the enemy if you move on all fours, if you are on your knees.”

But the opposition contenders have not explained what they would do differently, and their message has been a personality-driven one focused solely on removing Pashinyan.

“Calling Pashinyan a ‘traitor’ and using the word ‘capitulation,’ this is really not resonating for two reasons,” said Richard Giragosian, head of another think tank, the Regional Studies Center. “One, there is a deep understanding in the society that Pashinyan had no choice but to accept the Russia-imposed ceasefire. And yes, there is an absence of accountability [from Pashinyan] but this kind of criticism from the opposition is a little bit over the top. The second reason is perhaps more important: The opposition has failed to ever explain what, if anything, they would have done differently. The opposition doesn’t offer a credible alternative,” Giragosian told Eurasianet.

All of the contenders – including Pashinyan and his Civil Contract party – have been promising to regain control of the parts of Nagorno-Karabakh that Armenians lost in the war last year. But while some opposition forces hinted at the need to regain that territory through military means, they have more recently moderated that message to emphasize that they would rely solely on political and diplomatic tools.

“There is a possibility to return both Shushi and Hadrut [the two main cities lost by Armenians in the war], but for this we need negotiations, which the current authorities are incapable of conducting,” Vanetsyan told reporters on May 9, the day Armenians celebrate the Soviet victory in World War II, the taking of Shushi in 1992, and the Armenian armed forces.

The same day, Gagik Tsaurukyan, the head of the Prosperous Armenia Party – which is also contesting the elections and which is currently the largest opposition bloc in parliament – said the loss of Shushi “deprived us of the right to call this a triple holiday. … But I want to believe that sooner or later we will restore this right.”

The bellicose rhetoric of restarting war was “laughable, it doesn’t resonate with anyone,” Giragosian said. “Especially given the prisoners who are still to be returned, the high cost of life – there’s no appetite now for war.” The newly moderate discourse is the result of “the initial negative reaction to their more militant stance – retaking Shushi, etc. – they corrected it into a more nuanced, public version since then.”

Pashinyan’s message about Karabakh also has been that he will regain by diplomatic means the territories that were lost, and he is relying on the notion of “remedial secession.” That is the idea that Nagorno-Karabakh – ruled since the 1990s by a self-proclaimed government – might gain international recognition, a hope that Giragosian called “absurd.”

One common theme among all the contenders is the need to strengthen relations with Russia, Armenia’s ally and the co-signer of the November 10 ceasefire statement that ended last year’s war.

“Armenia can’t get back on its feet without Moscow’s support,” said another senior Republican Party member, Armen Ashotyan. “Consequently, only after change of power can we say that Armenia can have new pretensions and Moscow will extend a helping hand.”

“Almost all political forces are calling for strengthening strategic alliance with Russia – even Pashinyan, despite the fact that he came to power on promises to restore Armenian sovereignty, blaming the former authorities for being too weak with Russia,” Poghosyan said. A 2,000-strong Russian peacekeeping mission now provides security in the parts of Nagorno-Karabakh that Armenians retained control of last year, but their mandate expires in 2025 and its extension can be unilaterally vetoed by Azerbaijan.

“All [opposition groups] say that Russian troops should stay in Karabakh after 2025 as the only guarantee of preventing massacres and the deportation of Armenians,” Poghosyan added. “However, no one says how Armenia can guarantee this and what will happen if Russians leave.”

The opposition message on Russia is not always consistent: Following an apparent border incursion by Azerbaijani forces in mid-May, Pashinyan appealed to the Collective Security Treaty Organization, the Russia-led political-military bloc that obliges member states to protect one another from external attack. As a result, he has come under attack from many opposition figures for his inability to solve the crisis on his own.

“Why do you expect Russia to drop everything and do your job for you?” asked Vazgen Saghatelyan, a member of Kocharyan’s alliance, during a May 17 debate on public television. “We can expect Russia’s help but not to do our jobs for us.”

Joining the campaign against Pashinyan is even the prime minister’s former mentor, Levon Ter-Petrossian, the first president of post-Soviet Armenia. Ter-Petrossian had been known for his relatively moderate stance with respect to Azerbaijan, more in favor of concessions to Baku than the hardliners like Kocharyan who replaced him.

But for this campaign he proposed an alliance with Kocharyan and another ex-president, Serzh Sargsyan, which he said was “probably the only way to avoid new disasters. It is the duty of all Armenians to realize that the reproduction of Pashinyan’s regime is much more dangerous for Armenia and Artsakh [an alternate Armenian name for Karabakh] than even the possible or supposed threats coming from Azerbaijan and Turkey,” he said in a March 25 statement.

The two other former presidents rejected his proposal and Ter-Petrossian is now running alone with his Armenian National Congress party. If Pashinyan or Kocharyan win, he said on May 16, “the world will not understand how the Armenian people elected a leader that has brought the country to ruin.”