The social workers’ strike follows several other significant strikes over the past year across the country. 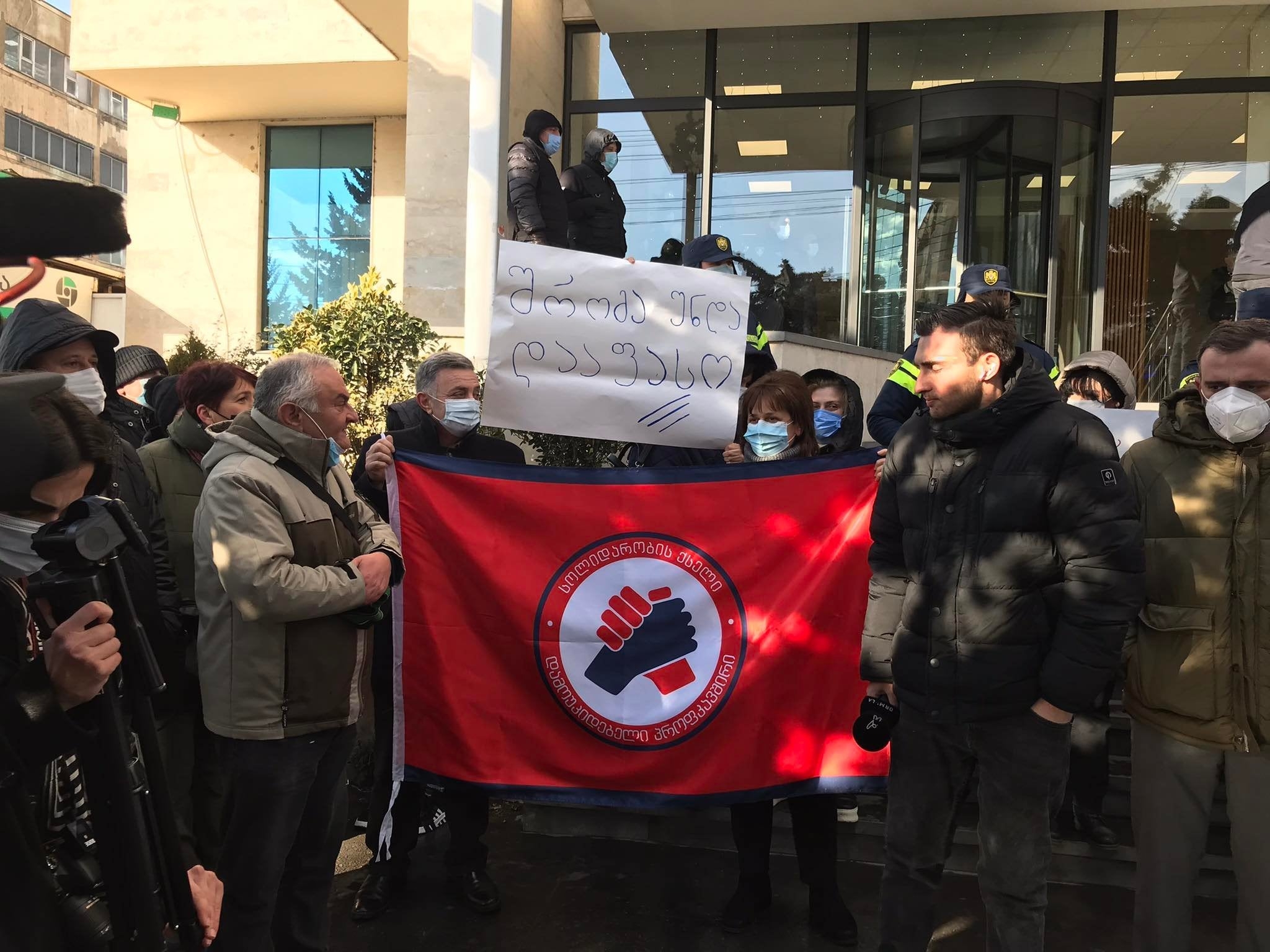 Georgian social workers have gone on strike, marking yet another episode in an upsurge of labor action that the country has experienced over the past year.

Under the slogan “We won’t be putting up with salaries from 2007 in 2022,” roughly 400 workers of Georgia’s Social Service Agency, a body responsible for providing social benefits under the Ministry of Displaced Persons, Labor, Health and Social Affairs, went on strike on January 17.

The effort, led by the independent union Solidarity Network, is aimed at securing pay increases – they say their pay has remained stagnant since 2007 – along with better working conditions.

Union officials described as a “bitter irony” the fact that low pay has meant that state workers providing social benefits are themselves in need of aid, while the ministry responsible for protecting labor rights is violating them with its own workers.

“Thirteen years ago I could afford two bottles of cooking oil with a bonus for a completed family declaration [to qualify a household for social assistance], but now I need to fill two declarations to buy a bottle,” said Tea Narimanashvili, a striking social agent, in an interview with TV Pirveli.

Social agents, the primary force of the current strike, are the main point of contact between state welfare agencies and the families who apply for government assistance. More than 600,000 Georgians, about 17 percent of the population, now rely on social assistance. Other staffers from the Social Service Agency joined the social agents in their action, leading to reported disruptions and closures of offices across the country.

The strikers complain that their pay rates have stood virtually unchanged since 2007, while official data show that prices in Georgia have almost doubled since then. Inflation rates broke records in 2021; in December prices rose 13 percent compared to the same month in 2020. Popular perceptions of ever-surging prices on basic products are even more dramatic.

That may be one contributor to 2021 being one of the most active years in recent memory when it comes to Georgian labor protests.

Over the past year, workers in a variety of sectors including industry, mining, the gig economy, and road construction have organized across the country to demand better conditions, often citing the inability to keep up with rising prices.

The trend has continued in the new year, with hundreds of engineers from Magticom, Georgia’s major communication company, going on strike to demand better pay in what they say has been a heavier workload under the COVID pandemic.

Quick victories in some of these actions – such as in the case of workers at the Borjomi mineral water factory or port workers in the coastal city of Batumi – belied the overall apathy in Georgia about the possibility of achieving change through social or political protests.

Not all strikes ended entirely successfully. One action by Tbilisi’s municipal waste workers achieved some of its demands, but was tainted by allegations of city authorities about the action being provoked by the political opposition. It also resulted in the questionable dismissal of one of the strike leaders, who had reported intimidation and blackmail from the management.

The Health Ministry attempted to head off the social workers’ strike by announcing on the day it began that, starting in February, monthly base salaries would rise from 250 to 400 lari ($80 to $130) for social agents and 550 to 700 lari ($180 to $230) for senior agents. Agents would now be paid 10 lari for each case reviewed instead of the current 6 lari. Another 1,000 agency workers would get raises from 40 to 60 percent.

But workers rejected the compromise, demanding that the monthly rate be doubled. “A 100 percent pay raise may appear like a huge sum, but trust me, our wages are so small that even this increase would just amount to a subsistence level,” one of the workers told Formula TV.

Aside from low pay, social agents complain about a stressful work environment, as they often face personal safety risks while on duty, and also must often contend with long distances to walk or travel to the households they work with. Their employer does not reimburse them for travel expenses, meaning that at times they are forced to spend more traveling to a visit than what they are paid for it.

On January 19, the strike entered its third day, as organizers demanded a meeting with Minister of Labor, Health and Social Protection Zurab Azarashvili and announced a series of demonstrations across the country for the following day.