Azerbaijan has demanded a full withdrawal of Armenian forces, and Armenia is hinting it might formally recognize Nagorno-Karabakh as an independent country. 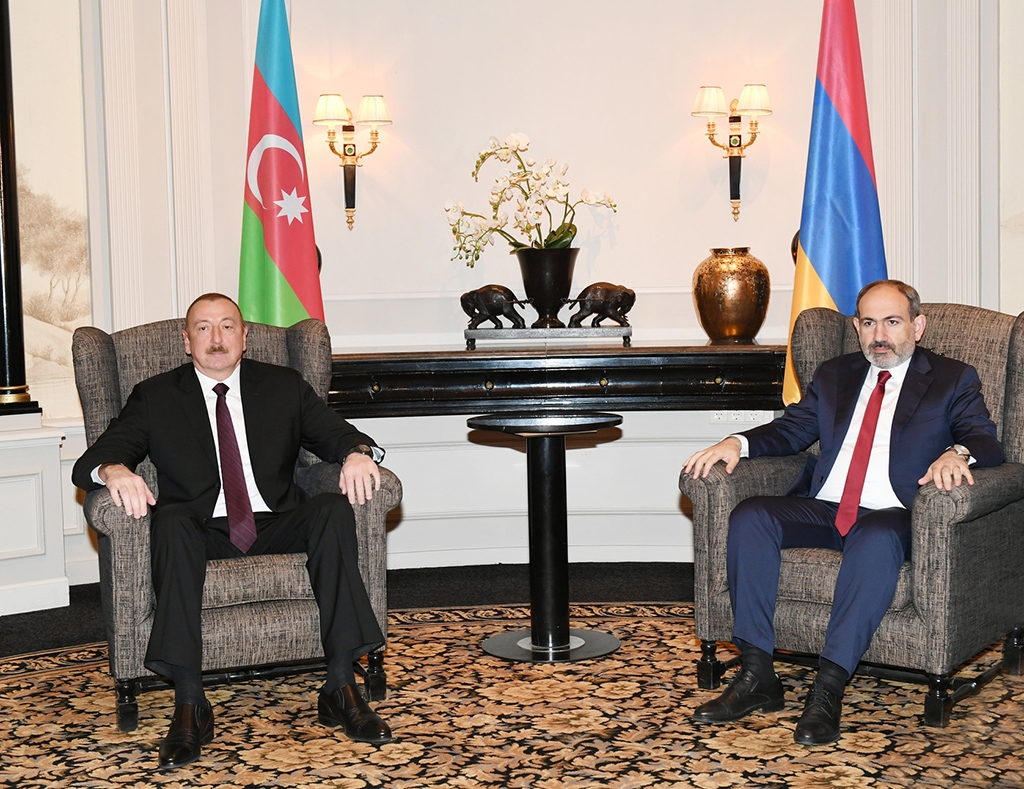 The two leaders met in Vienna in 2019. Since then the mood has even gotten worse. (photo: president.az)

Azerbaijan will not stop its offensive until Armenia formally agrees to withdraw its forces from Azerbaijani territory, President Ilham Aliyev has said. The condition is inconceivable for the Armenian side to accept, suggesting that the ongoing war has no clear end in sight.

Aliyev laid out the condition even before the fighting started, on September 25, but he repeated it more explicitly in an address to the nation on October 4.

In the speech, he said that world leaders have been calling him and asking him what it will take for Azerbaijan to restore the ceasefire. “My condition is the same – to leave our lands,” he said.

He issued several other conditions that are nearly as impossible for Armenians to accept, including that Prime Minister Nikol Pashinyan “apologize to the Azerbaijani people” for saying in a speech last year that “Karabakh is Armenia – period!”

“The last condition is to give us a schedule for a withdrawal of the Armenian armed forces from the occupied territories,” Aliyev said. “Then, of course, we will restore the ceasefire.”

For Azerbaijanis, “occupied territories” refers to both the former Soviet Nagorno-Karabakh Autonomous Oblast and the other territory surrounding Karabakh that Armenian forces also control. Armenians captured those territories in a war between the two sides as the Soviet Union collapsed, and since then Azerbaijan has been seeking to get them back, either through a peace deal or force.

The framework under which the negotiations between the two sides have been taking place envisages mutual concessions, including a withdrawal of Armenian forces from at least some of the territory they now control. But that would be accompanied by concessions from Azerbaijan, as well.

Both sides have increasingly been calling into question that framework, known as the Madrid Principles, but until now the process has still been on life support. The widening conflict is quickly snuffing it out, however.

Aliyev made his maximalist claims in a near diplomatic vacuum around the conflict. There has been little apparent international effort to bring the two sides together to stop the fighting, the heaviest since the Armenians and Azerbaijanis signed a ceasefire ending the first war in 1994.

Russia, traditionally the most active diplomatic player in the conflict, has been conspicuous by its absence. The United States, even more so. The Minsk Group of the OSCE, the diplomatic body tasked with mediating the negotiations between Armenia and Azerbaijan, hasn’t issued a statement since September 29.

By far the most active international player has been Turkey but it has only been fanning the flames of the conflict. Senior Turkish officials are regularly cheering on Azerbaijan’s military offensive and Ankara is providing military assistance, though the scope of the latter is still unclear.

Armenia would never have accepted Aliyev’s unilateral conditions, and even less so under what is effectively a violent ultimatum.

And Armenia appears to be going in the opposite direction, repeatedly floating the idea that it might formally recognize Nagorno-Karabakh as an independent country.

"Yes, our agenda includes the issue of recognizing the independence of Nagorno Karabakh,” Pashinyan told journalists on September 30. He repeated the suggestion in an interview with Al Jazeera aired on October 3.

Karabakh’s de facto Ministry of Foreign Affairs has been more assertively backing the idea, campaigning to get not only Armenia but other countries as well to recognize the entity.

“We call on the international community to recognize the independence of the Republic of Artsakh in order to ensure the rights of the citizens of Artsakh to life and peaceful development,” the MFA said in an October 3 statement, using the Armenian word for Karabakh. “In the current situation, the international recognition of Artsakh is the only effective mechanism to restore peace and security in the region.”

The MFA also has started a hashtag, #RecognizeArtsakh, which has been picked up by many Armenian social media users.

Although Armenia heavily backs the de facto Nagorno Karabakh Republic, it – along with every other country in the world – has declined to formally recognize it. Formal recognition of Karabakh, too, would effectively scuttle the negotiations; one of the Madrid Principles is that the final status of Karabakh would be determined by a referendum.

Both Armenians and Azerbaijanis have also making rhetorical demands that only their side could control Karabakh, but formal recognition by Armenia would nevertheless be a step beyond.

Following this scale of fighting, however, it is hard to imagine them surviving in any case.