In France’s second city, a vibrant outpost of Armenian culture

Though Marseille has long hosted a diaspora, recent arrivals have invigorated the community. 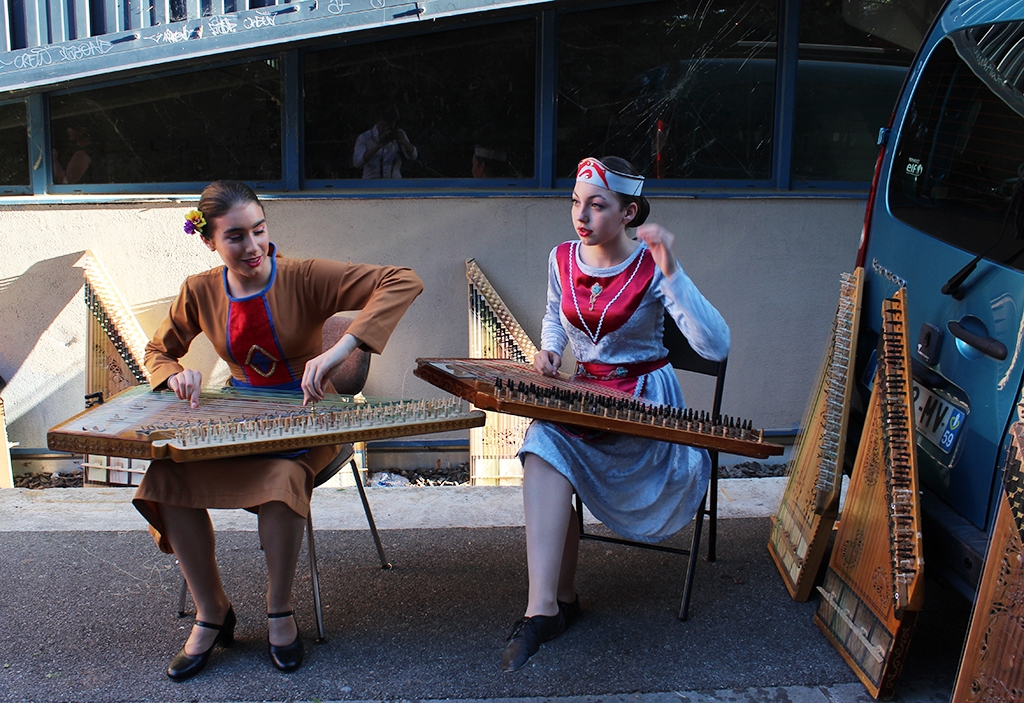 Girls practice the Qanun during a folkloric festival in Gémenos, a village north of Marseille. (all photos Killian Cogan)

On a breezy Sunday morning, families walk hurriedly into Marseille’s Armenian Cathedral. A miniature replica of Etchmiadzin – the seat of the Armenian Apostolic Church – The Church of the Holy Translators on Prado Avenue was built in 1928 to receive refugees fleeing a Turkish onslaught in Asia Minor. Nowadays, the place is teeming with immigrants from the Republic of Armenia.

In France’s second-largest city, Armenian culture is thriving. And though the metropolis has long hosted a diaspora, recent arrivals have invigorated the community.

“Marseille is the cradle of our diaspora,” said Pascal Chamassian, 53, a politician whose grandparents came from Anatolia. “Everyone who escaped from the genocide passed by here.” Numbering about 100,000, people of Armenian descent are said to make up close to 10 percent of Marseille’s denizens.

The first major influx came in the early 1920s when throngs of refugees from a crumbling Ottoman Empire disembarked onto Marseille’s port. Around 60,000 of them were settled into squalid camps, causing unease among Marseillais at the time. “The Armenian is like a plant that grows between the pavements of a city,” wrote the journalist Albert Londres in a 1927 travelogue.

Still, in the following years, these émigrés blended into the city and contributed much to its character. A local pizza was even baptized l’arménienne in their honor. The son of genocide survivors, filmmaker Henri Verneuil, born Ashot Malakian, captured the journey in his autobiographical Mayrig.

Despite that, in 1947, in a startling historical twist, a few thousand of these exiles heeded a call from Soviet dictator Josef Stalin who urged the diaspora to help build the Armenian Soviet Socialist Republic. Around 3,000 Armenians decamped from Marseille seeking a cherished motherland. But faced with dismal living standards and the brutish reality of Stalinist socialism, many flocked back to the Mediterranean metropolis as soon as they could. That was several decades later, when Soviet borders were relaxed.

“It took them three days to get to Armenia but 40 years to come back,” quipped Jean Kéhayan sitting in his apartment overlooking a Provençal garden abundant with olive and cypress trees. A local intellectual, Kéhayan served for a brief stint as an advisor to Levon Ter-Petrosyan, Armenia’s first president following independence in 1991.

Later, in the 1950s and ‘60s, the Marseillais diaspora grew with the arrival of Armenians escaping anti-Christian pogroms in Turkey and, later still, the civil war in Lebanon. Since the early 1990s, Marseille has attracted a continuous flow of economic migrants from the Republic of Armenia.

“This immigration has enlivened Armenian culture in Marseille,” contended Chamassian with the distinctive twang of southern France. “It is a new breath that has revived our identity. Our cultural centers, churches and schools are filled with recent migrants.”

Péno Aynedjian, the sports director of UGA Ardziv, a local Armenian football club, said he has also witnessed the community’s expansion. “There is a great mix of provenances in our club, we have Armenians from all horizons,” he maintained. “More and more Armenian restaurants are opening. When I was younger, there was one or two at most. Now you see many, all with regional specificities: Armenian-Russian, Lebanese-Armenian.” Aynedjian himself came from Beirut in 1976.

Yet upon arrival, many of these newcomers received a tepid reception from their established counterparts.

“It was very difficult when we arrived here,” said Lida Badalyan, an accountant who left Yerevan in 1999 with her parents and brothers because of poverty. “We didn’t know anyone and the historic Armenian community accused us of having turned our backs on the homeland. But it’s not as if they wanted to live there themselves!”

Such tensions reflect a broader conflict between a nationalist diaspora that pushes for recognition of the 1915 genocide at all costs and the citizens of a small Caucasian republic that are more concerned about bread-and-butter issues.

“The Armenian community here was built by successive waves of immigration. But with each wave, integration into the local networks was not easy,” said Kéhayan, who has written several books about connections between Marseille and Armenia.

“After the outbreak of the war in Lebanon, the Lebanese-Armenians who came here were a lot more militant than we were,” he added. “And whereas the Armenians from Turkey [who arrived in the 1950s] were regarded as collaborators with the Turkish enemy for having continued to live there after the genocide, Armenians from Armenia were rejected as they were seen as having betrayed the motherland.”

For Aram, 42, whose wife came from Armenia in 2008, the only barrier with recent immigrants was the language differences between eastern and western dialects. His own parents were among those who followed Stalin’s exhortations only to return in the 1980s.

After mass has ended on Prado Avenue, the street fills up with the clamor of people chattering away in Armenian. “In Marseille, at times, it feels like we are in Armenia itself,” beams Irena, who came from Yerevan in 2002. Had it not been for the nearby Mediterranean coast and bougainvillea trees, the scene could have been a village in the Caucasus.