The recent political crisis has established the EU as Georgia’s most important Western partner. 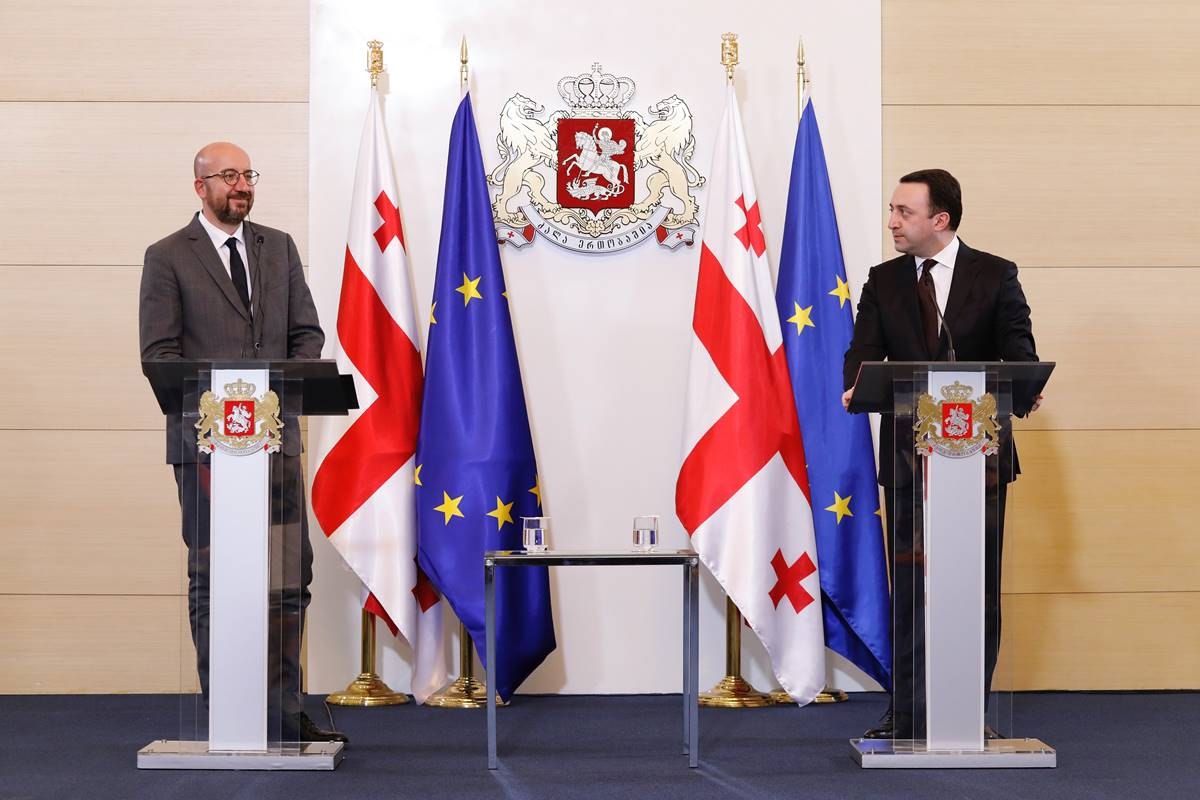 Until recently, visitors to Tbilisi were welcomed by a familiar face. George W. Bush Street, the home stretch of a highway leading from the airport into the city center, featured a large portrait of the former U.S. president mid-wave. The street still bears his name, but Bush’s smiling visage has been replaced with a less conspicuous plaque.

The recent political crisis in Tbilisi, and the EU’s critical part resolving it, has underscored Brussels’s newly leading role.

When the ruling party and the opposition found themselves at loggerheads following controversial elections last fall, embassies from both the U.S. and the EU worked overtime to mediate the partisan slugfest. But it was high-level, on-the-ground involvement from Brussels that ultimately broke through.

European Council President Charles Michel made two trips to Tbilisi to personally mediate between the feuding politicians; in an unprecedented move, the EU even footed the bail (about $11,700) for jailed opposition leader Nika Melia as a face-saving way out of the stalemate.

In the end, most Georgian political parties agreed to the EU’s mediation plan, known as the Danielsson Document after another special envoy dispatched from Brussels. An opposition alliance led by Melia’s United National Movement (UNM) finally took their seats in parliament on June 8, following a crippling seven-month boycott. One group of opposition MPs even named itself the “Group for Charles Michel’s Reforms” faction in honor of the negotiator.

By contrast, Washington started sending its envoys only recently, once the crisis was resolved, to reinforce the calls for political reconciliation and democratic reforms. Senators Jeanne Shaheen and Rob Portman visited in the first week of June, and were followed by Philip Reeker, an acting assistant secretary of state.

All sought to emphasize Washington’s special connection to Georgia, a country that has worked hard to establish itself as the most pro-American corner of the post-Soviet space. “The United States has no better ally in the region than Georgia,” Portman, an Ohio Republican, said at a June 3 press conference. “Georgia has no stronger partner than the United States,” Reeker said on June 7.

The tight U.S.-Georgia bond was forged in the early post-Soviet period. In the 1990s, President Eduard Shevardnadze leveraged his personal connections from his time as the Soviet Union’s foreign minister to cultivate a strategic relationship with the U.S. as he sought to distance and protect Georgia from Russia.

Ties with the U.S. reached their pinnacle under Shevardnadze’s successor, Mikheil Saakashvili, who hired American advisors, contributed troops to NATO missions in Iraq and Afghanistan and undertook an ambitious effort to teach every pupil in the country to speak English. It was under Saakashvili that Bush became the first (and still only) American president to visit independent Georgia, famously dubbing the country a “beacon of democracy.”

Bush’s vaunted “democracy agenda” failed in so many of the places where it was attempted – Iraq, Afghanistan, Lebanon – and “Georgia was one place where it succeeded,” said Paul Stronski, a senior fellow in the Russia and Eurasia Program of the Carnegie Endowment for International Peace, a Washington, DC, think tank. “So there was an overemphasis on the importance of Georgia during [Bush’s] tenure,” Stronski told Eurasianet.

But it was inevitable that the Bush-era ardor with Georgia would cool.

Georgia’s relations with Russia were developing in inverse proportion to its ties with the U.S. That culminated in the 2008 war over South Ossetia, in which the U.S. stood up for Georgia but was forced to leave the negotiating and monitoring of the peace to Europeans, with whom Moscow had a less toxic relationship.

That pattern has continued: While even the mention of Georgia’s potential NATO membership continues to be a red line in Moscow, Russia has stood by relatively quietly as Georgia concluded association, free-trade and visa-free travel agreements with the EU, a process some analysts call “accession by stealth.” Similarly, Moscow did not strongly react to Georgia’s recently announced plans to formally apply for EU membership in 2024.

Meanwhile, the EU has emerged over the past decade as Georgia’s top trade partner, outpacing each of the country’s immediate neighbors – as well as Moscow’s own trade bloc, the Eurasian Economic Union.

From Brussels’s perspective, Georgia has emerged as one place in the EU’s “Eastern Partnership” zone of post-Soviet states where Europe can really make a difference.

“The EU stayed out or was left out of the Armenia-Azerbaijan war, which Russia and Turkey resolved as they found fit,” said Kornely Kakachia, the head of the Georgian Institute of Politics, a think tank. “The Georgia affair, by contrast, offered a low-risk situation to get involved in where it was likely to succeed.”

At the same time, Washington has been looking elsewhere. Under the Obama administration, the U.S. shifted its focus away from the post-Soviet world and toward the Pacific, Western Hemisphere and Western Europe, Stronski said. American disengagement was further encouraged by the perception of undemocratic excesses by Saakashvili, and then by his successor as Georgia’s leader, Bidzina Ivanishvili, along with a seemingly perpetual political crisis in Tbilisi.

“There is a lot of frustration on this side of the Atlantic with how Georgian politics seems perennially stuck,” Stronski said.

Georgia, for its part, has also grown more inward-looking. The Ivanishvili government emphasized from the very beginning that it did not want Georgia to be a place for West-Russia confrontation. The ruling Georgian Dream party instead focused most of its energy on the never-ending domestic war with Saakashvili and his UNM party.

“[Whereas] Saakashvili and his UNM actively sought out alliances and opportunities in the U.S., this government is just floating along within the broad framework of strategic partnership,” Kakachia said. “Beyond that, they don’t have many concrete ideas of how to engage with the U.S.”

At a press conference in Tbilisi, Reeker was asked about the prospects of a free trade agreement between Georgia and the U.S. He equivocated, focusing instead on the need to strengthen the rule of law and stability as a way to attract American business.

Georgia continues to enjoy bipartisan support in the U.S., but it remains to be seen if Joe Biden takes a more active interest in the Caucasus than his two immediate predecessors. Biden’s stated interest in reinvigorating “democracy promotion” could result in more active engagement provided that “Georgia gets back on track on that front,” Stronski said.

Matters are far clearer on the European front. If nothing else, geography gives both the EU and Georgia the ability and the motivation to keep building closer ties. “After all,” Kakachia said, “Georgia wants to join the EU, not the U.S.”