In Georgia, more important than Santa

New Year’s is the main winter holiday in the post-Soviet world, after the communists took Christmas customs and melded them into the more secular January 1. But Georgia’s mekvle tradition long predates this shift. 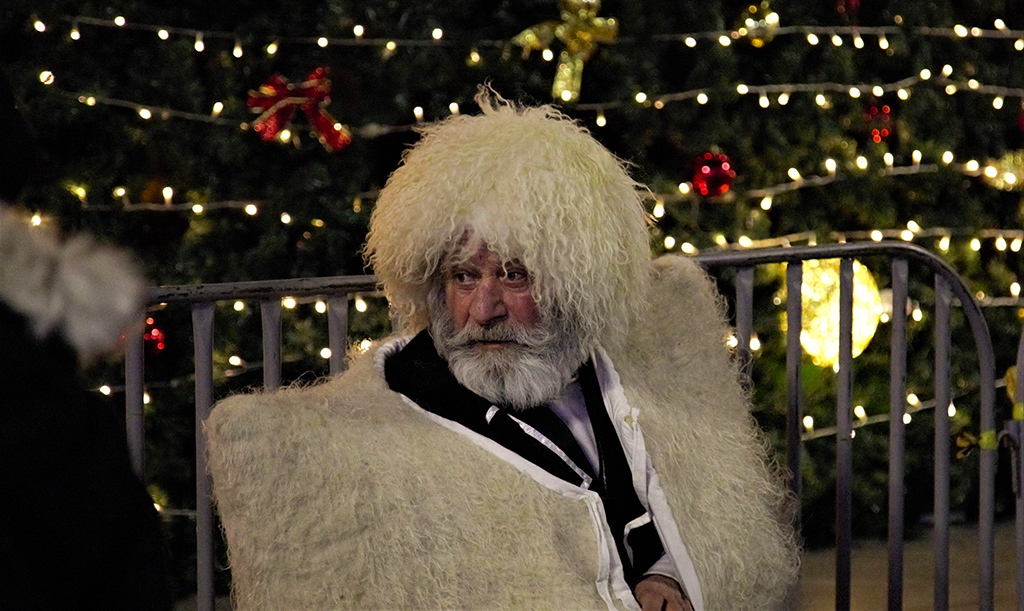 With all due respect to the Georgian Santa, known as Grandpa Snow, he is not the true VIP of the winter holidays. (photo by Giorgi Lomsadze)

This New Year’s holiday, neighbors and relatives may show up after midnight at Temo Pavliashvili’s house, bearing sweets, wine, and season’s greetings. But if they get there too early, they’ll have to wait. “Everyone will be staying outside, until Vazha arrives,” Pavliashvili says.

Georgians will tell you that the first person to cross the threshold of your home in the new year defines how the rest of that year will go. The wee-hours guest, known as the mekvle, can take all the credit for good things that happen that year – and shoulder the blame for what goes wrong.

Pavliashvili’s old friend Vazha has an excellent record in that capacity, ushering in many happy years for the Pavliashvili family. The births of Pavliashvili’s two children, pay raises and the successful repayment of a home mortgage – all this and more are feathers in Vazha’s cap. So Pavliashvili isn’t going to risk letting a less-qualified somebody be the first to wander into his house in those portentous hours.

“One time, I left my neighbor out in the cold and snow for a good 20 minutes,” says Pavliashvili, who works as a car mechanic in Tbilisi but spends his holidays in his hometown of Gori, with a laugh. “The table was set inside, my wife gave me hell for not letting the guest in, but he had to wait freezing out in the yard, shifting from foot to foot and drinking his own wine by himself” until Vazha finally came plodding through the snow to save the day.

New Year’s is the main winter holiday in Georgia, as in the rest of the post-Soviet world, because the communists took Christmas traditions – the decorated tree, festive dinner and a gift-bearing old man – and melded them into the more secular January 1. But the mekvle tradition long predates this shift; some ethnographers link it to St. Barbara’s Day, known as the “day of fate,” which is January 2.

Mekvles are expected to make a theatrical entry, showering the host with candies and good wishes. A punctilious type may throw around a handful of wheat grains, a symbol of abundance. “Rice or buckwheat grains will do, if you can’t get the wheat,” says Teko Chiburdanidze, a 40-year-old Latin dance instructor in Tbilisi and an in-demand mekvle in her circle of family and friends.

Chiburdanidze is dogmatic about the proper ritual – “when you go in, you need to say: ‘I set my foot in, may you be blessed by God,’” – and she can’t underscore enough the importance of stepping in with the right foot. Using the wrong extremity could reverse the host’s luck; being a good mekvle is in fact sometimes described as “having a lucky foot.”

Chiburdanidze was a child when her lucky foot was first noticed. “My mother sent me to pick up something from a relative after the new year and I ended up being the relative’s mekvle,” she recalled. Chiburdanidze and her mother were terrified. The relative was a crotchety neighborhood scold “and would’ve blamed us for everything that might have gone wrong that year.”

But crisis was averted. Against many odds, the relative’s daughter entered university that year and got a full tuition waiver. Chiburdanidze’s foot proceeded to gain a bit of renown and her January 1 visits have become much in demand in her social circle. In the last few years, several of her friends brought apartments and another got married following her serendipitous visitations.

As a result, New Year’s Eve has become increasingly stressful for Chiburdanidze, as she speed-dates a line-up of kith and kin in a matter of a few hours. “Everyone wants me to come and I have an itinerary of places I have to visit,” she says. The moment the clock strikes midnight, she quickly takes a gulp of champagne, wishes her mother a great year ahead and goes sprinting through the night, zigzagging from house to house to parcel out candies, grains and good fortunes.

This new year she will have to literally race a distant relative to her sister’s house. The distant relative has been her sister’s mekvle for years, but his luck has expired and Chiburdanidze needs to step into the breach: “My sister does not want to offend him by dismissing him but she also wants a new house [fixing real estate issues is Chiburdanidze’s métier as mekvle], so I will have to secretly go in first. When he shows up, we will pretend that he is the actual mekvle.”

The problem with the plan is that the relative is a lonely old man and lives close to the sister’s house. “He will set out for my sister’s place first thing after midnight as he has nothing to do at home,” she says, so she will “have to run like a hurdler,” taking shortcuts and backways to sneak in ahead.

Not everyone takes the mekvle duty quite that seriously. It is often just a courteous excuse to invite friends or neighbors and bond over a holiday meal. “The mekvle tradition pays an important role socially. At the end of the day, it is about building bonds, getting a sense of kinship,” said Keti Gurchiani, an associate professor of sociology at Ilia Chavchavadze University in Tbilisi.

“You see, [French sociologist] Marcel Mousse said that a gift is about both giving and taking: a gift, be it a material object or a friendly gesture, comes with an expectation of reciprocity,” Gurchiani said. “If you are invited to a dinner in someone’s house, you feel you have to invite them back or reciprocate in some way. Similarly, when you ask somebody to be your mekvle, you place a friendly obligation on them, an obligation of continued kinship… Just as when you pick godparents for your children, when you pick mekvles, you give them a special place in your life and put them in a social debt. After all, you place your fate in their hands for a whole year.”

It is not just humans who can serve as mekvles: Gurchiani’s pet dog is a popular mekvle in her neighborhood. After ringing in the new year at home, Gurchiani’s family take their Labrador on a walk/mission, letting the dog enter their neighbors’ first. The jocular tradition was inspired by a 1978 Georgian comedy film “Lucky Foot,” where a dog becomes the surprise usher of a happy new year.

With 2020 around the corner, Georgians are now putting out feelers to new potential mekvles or sending reminders to the usual ones about their annual obligations. As she is preparing for her main mission of the year, Chiburdanidze says that she is destined to give luck, but can’t get any herself. “Over the years, my mother and my family have tried many different mekvles to help me get married,” she says. Alas, she says with a resigned smile, she is always the mekvle, never the bride. “I’m still single. I guess I just could not find the right mekvle.”