Turkey's Recep Tayyip Erdogan was the first foreign leader to visit Karabakh since the end of last year’s war, in which Turkish backing helped Azerbaijan secure its victory. 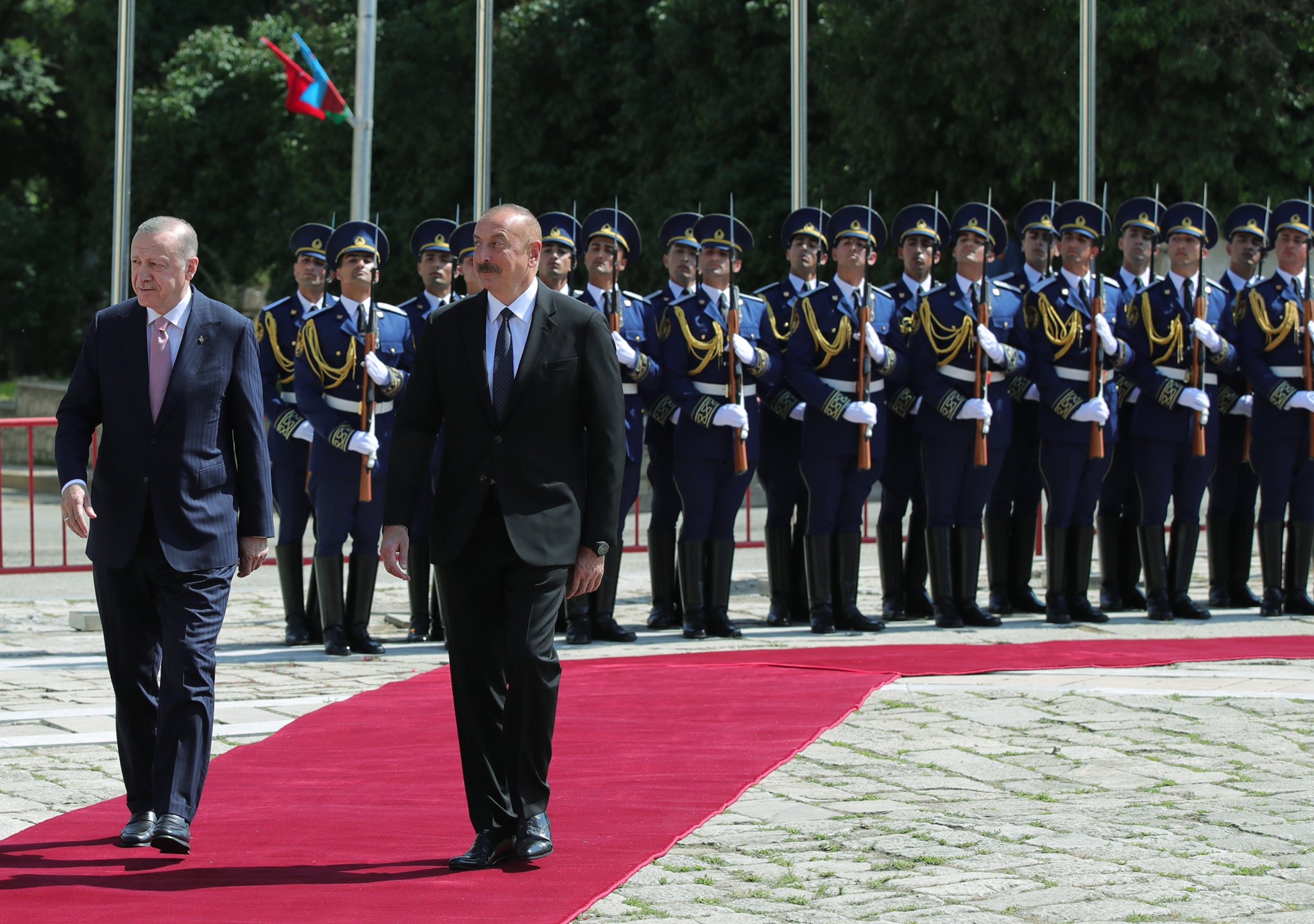 Turkish President Recep Tayyip Erdoğan paid his first official visit to Karabakh eight months after Azerbaijan’s victory in the war against Armenia. He and his Azerbaijani counterpart Ilham Aliyev on June 15 signed a new agreement aimed at boosting cooperation between the two countries on defense and economic issues.

The timing of the trip was somewhat of a surprise; when Erdogan’s visit to Azerbaijan was announced last week local media reported that he was going to first attend a Euro 2020 soccer match between Turkey and Wales on June 16 and then head to Karabakh. But Aliyev and Erdogan instead hit Karabakh before the soccer match.

The two presidents first visited Fuzuli, the capital city of one of the territories that Azerbaijan retook during the war. Aliyev formally greeted Erdogan and then accompanied him to Shusha, the city Azerbaijan considers its cultural capital of the region and which has been the focus of its reconstruction efforts in Karabakh so far.

En route, Aliyev briefed Erdogan on the reconstruction work that has taken place in the region so far, and the involvement of Turkish companies in the rebuilding.

In Shusha, the two met one on one and then emerged to sign a “Shusha Declaration on Allied Relations” between the two states.

“The name of the declaration says it all,” Aliyev told press. “Today, we have established a qualitatively new relationship, and all provisions of this declaration are a guarantee of our future cooperation.” Aliyev said the agreement was the most significant treaty since the 1921 Treaty of Kars, which established the borders between Turkey and the three Caucasus Soviet republics.

In their comments about the declaration, Aliyev and Erdogan emphasized the defense and economic elements.

“Every issue has a great importance. I would especially like to note two of them. Firstly, cooperation, collaboration in the defense field, defense industry field, and mutual military assistance issues.” Aliyev said at a joint press event in Shusha. The second, he said, was the “Zangezur corridor,” the term Azerbaijan uses for a planned transportation link connecting Azerbaijan’s mainland to the exclave of Nakhchivan and onward to Turkey.

“We consider Azerbaijan’s Zangezur corridor very important and support this,” Erdogan said. “This is the result of the new geopolitical situation after the Second Karabakh War,” Aliyev added.

Other elements of the agreement include a mutual defense pact, a plan to build Turkish drones in Azerbaijan, for Turkey to open a consulate in Shusha, and for Turkey’s government housing agency TOKI to help construct residences for former residents of the region who want to move back. More than 600,000 Azerbaijanis were displaced in the first war between the two sides in the 1990s. “Karabakh has been returned to its owners,” Erodgan said.

This is not the first time Azerbaijan and Turkey have signed a strategic partnership agreement. In 2010, Aliyev and then Turkish president Abdullah Gul signed a “Strategic Partnership and Mutual Aid Agreement,” which also includes a mutual defense agreement.

“The main new thing in the agreement is that joint meetings of the Security Councils [of the two countries] will be held. That means policy on defense and security will be coordinated,” analyst Shahin Jafarli told the BBC Azerbaijani service.

Jafarli said the agreement was a message to both Armenia and Russia. “This means that Turkey openly declares that if any further attacks and provocations are carried out against Azerbaijan, Turkey will defend Azerbaijan,” he said.

In Shusha, Erdogan did refer once to Russia: He called on Armenia to join a mooted regional structure, first proposed by Turkey, that would include the three Caucasus states plus Russia, Iran, and Turkey. “My brother [Aliyev] and I are ready to make any selflessness to take this step. Mr. Vladimir Putin is ready for such selflessness,” he said.

The agreement was broadly popular in Azerbaijan. A group of public figures, political parties and NGOs issued a statement welcoming the declaration, arguing that closer cooperation with Turkey would help the country deal with “threats against our country by foreign special services, especially Russian-Armenian intelligence.”

Armenia, which considers Shusha to be occupied by Azerbaijan and has said it intends to return control of the town to the unrecognized, Armenia-backed Nagorno Karabakh Republic, condemned Erdogan’s visit, calling it “an outright provocation against regional peace and security.”

The agreement is a message “both to the countries of the region, and the revanchist forces of Armenia,” said Natig Jafarli, an economist and a cofounder of the political party ReAl, in an interview with independent media outlet Open Azerbaijan. “Given the presence of Russian peacekeepers there [in Karabakh], it was also a message to Moscow: The presence of Russian peacekeepers does not mean that Azerbaijan and Turkey may not have any say or role in these matters.”