Toxic chemicals stored at a plant that has now become a crypto mining operation threaten the wider region. 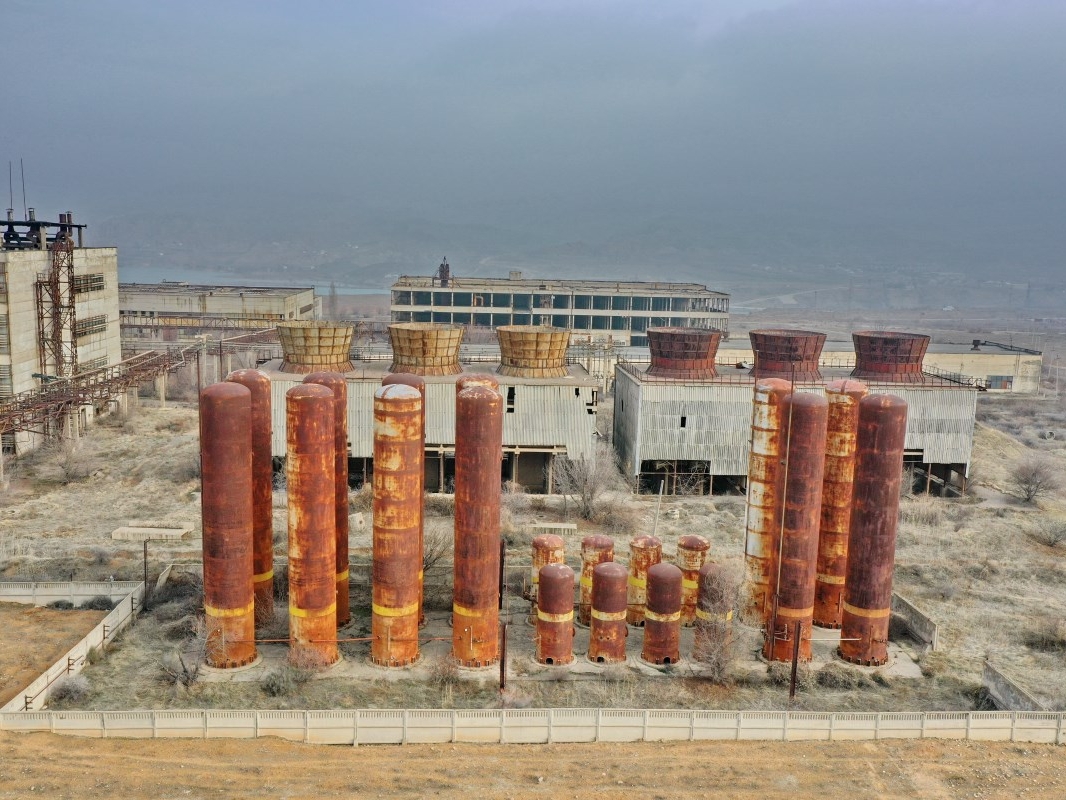 Even after he retired in 2019, chemical engineer Suidumbek Kalmurzayev remained preoccupied by the fate of his former workplace in Tash-Kumyr, a Kyrgyz city that sits at the gateway to Central Asia’s Fergana Valley and is known locally as “the graveyard of factories.”

“I used to say to him: ‘What’s it to you? Leave that factory well alone’,” Kalmurzayev’s widow Uububyu Kalmurzayeva told Eurasianet during an interview at her home.

“He would say that Tash-Kumyr was sitting on an ecological time bomb. He tried until the end to find out where all the money went.”

Kalmurzayev died last year after a brief illness, leaving behind a trove of documents and press cuttings connected to the Soviet-legacy Kristall polysilicon factory where he was the last employee.

But the time bomb he referred to with regularity is still ticking.

For more than two decades, 80 tons of dangerous chemicals have sat in disused Kristall, which once transformed volatile compounds into materials for semiconductors and was slated to become one of the biggest plants in the world of its type. In the age of microchips and solar panels, its output would have been in high demand.

Instead, neglected and ignored by the government, residents fear these corrosive chemicals are now slowly leaking out into the local environment, spelling ecological catastrophe for both the city and the wider region, including the populous Fergana Valley below. 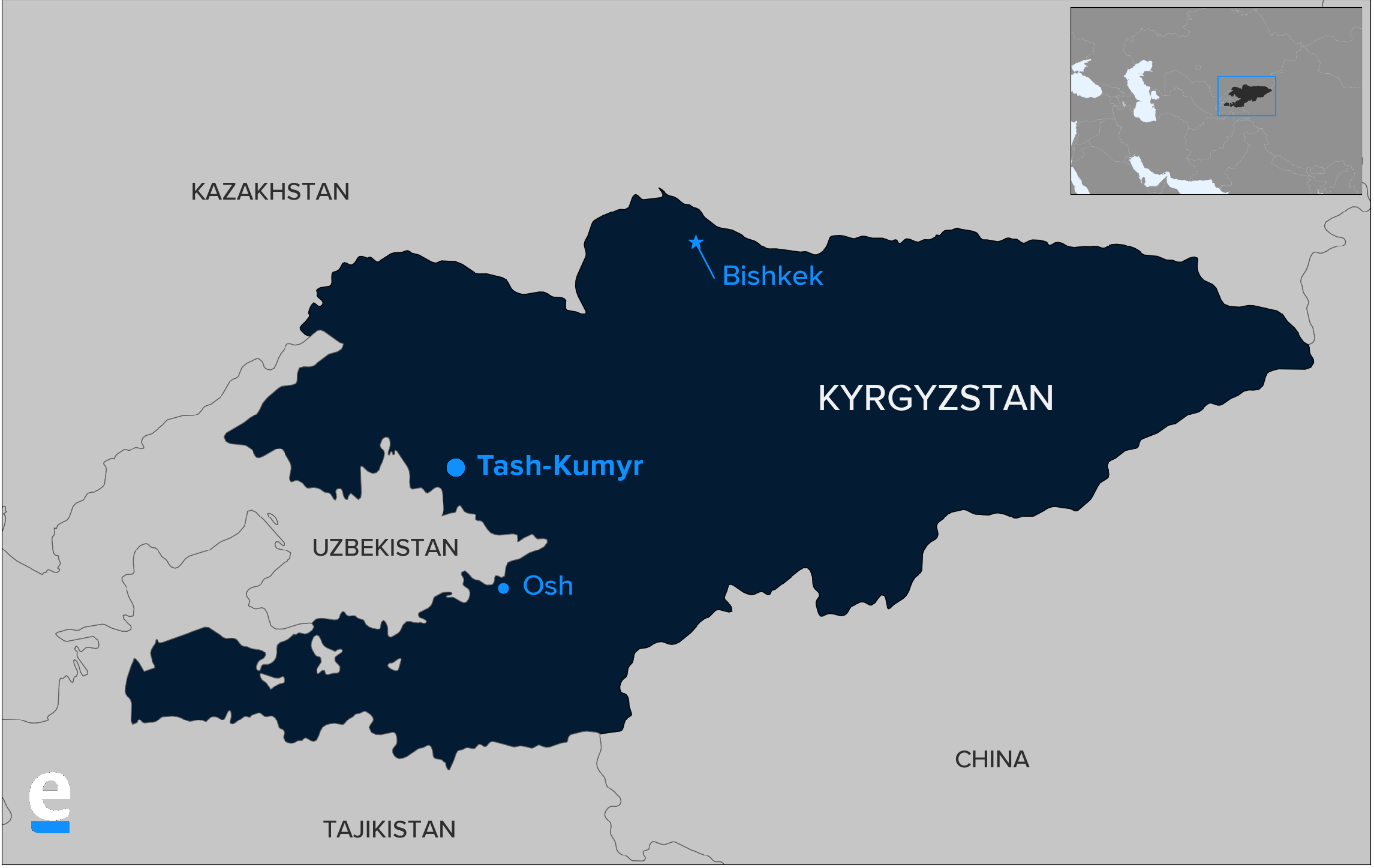 Kalmurzayev began working at Kristall as a foreman in 1985 and later became a production manager.

Over the years he saw the site constantly divided into different sections with different companies in charge as Kyrgyzstan’s political tides shifted, with two presidents felled within five years of each other during the second decade of independence.

The site is now owned by Computer Power Center LLC, a company registered in Kyrgyzstan 2019.

Its director, Maksat Oskonbayev, confirmed that it now hosts a crypto mining farm, although he claimed that the rigs aren’t currently running. 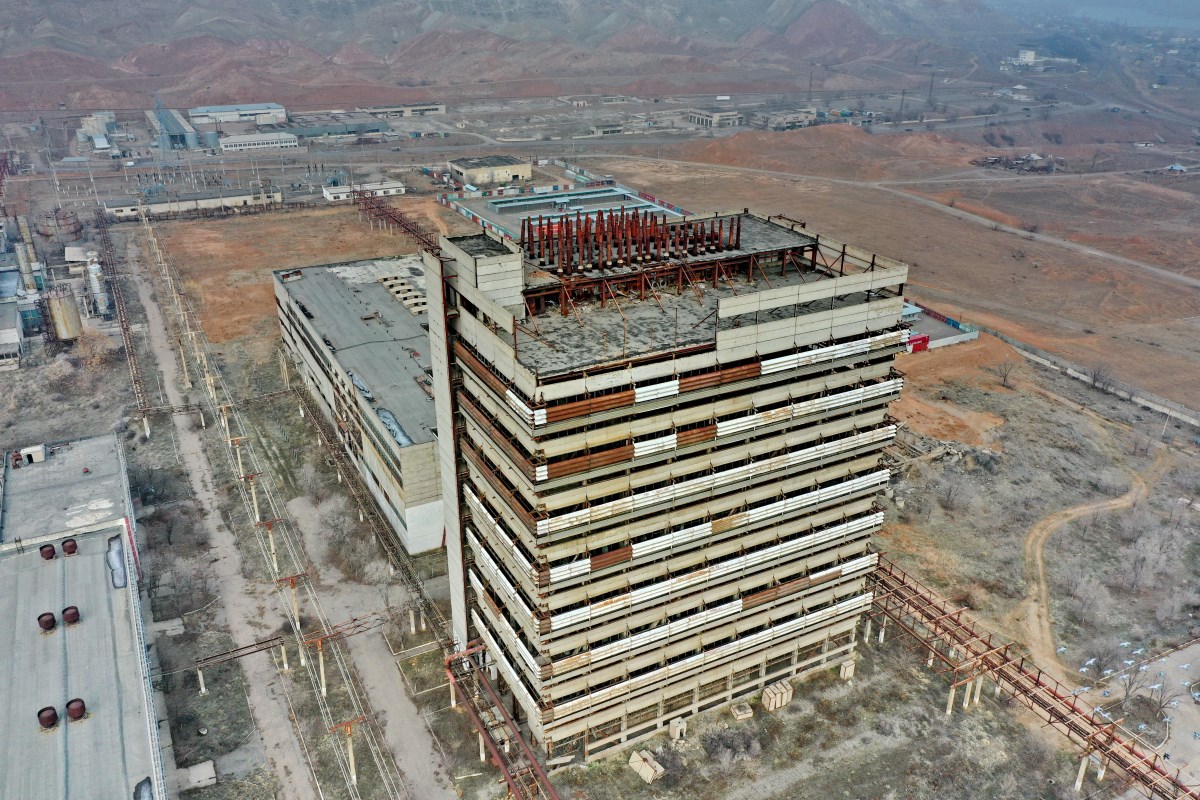 During a meeting in Tash-Kumyr, Oskonbayev claimed that he is not allowed to access the territory and that the large vats of chemicals are not the company’s responsibility since they are owned by a separate firm called Tash-Kömür Silicon Production CJSC (TSP), from whom Computer Power Center LLC acquired the land and building three years ago.

“Everybody knows that there is poison in these tankers, residue in the pipes. We raised these questions [with the state property fund] right after we bought the plant. Everyone knows that we won’t get any investors here until the issue is resolved,” said Oskonbayev.

The shifting of responsibility for the chemicals has been a pattern at the plant, which has mostly stood idle after being prepped for privatization in the wake of the Soviet Union’s collapse in the early 1990s.

According to a 2012 report by news website 24.kg assets on the territory were from 2007 onwards controlled by Belize-registered companies linked to then-President Kurmanbek Bakiyev’s son Maksim Bakiyev and his business partner and former classmate Alexey Eliseev.

These years were the most productive during independence for the factory, which began producing polycrystalline silicon in line with world standards.

But at 750 kilograms in 2009, annual output was well short of the 165-200 tons that the new investors were setting as their ultimate target.

The following year brought bloody revolution, nationalization and accusations of mass embezzlement and worse aimed by the new regime at the fugitive Bakiyevs and their associates.

Kristall was declared bankrupt, placed under external administration and kept in standby mode with a skeleton staff. 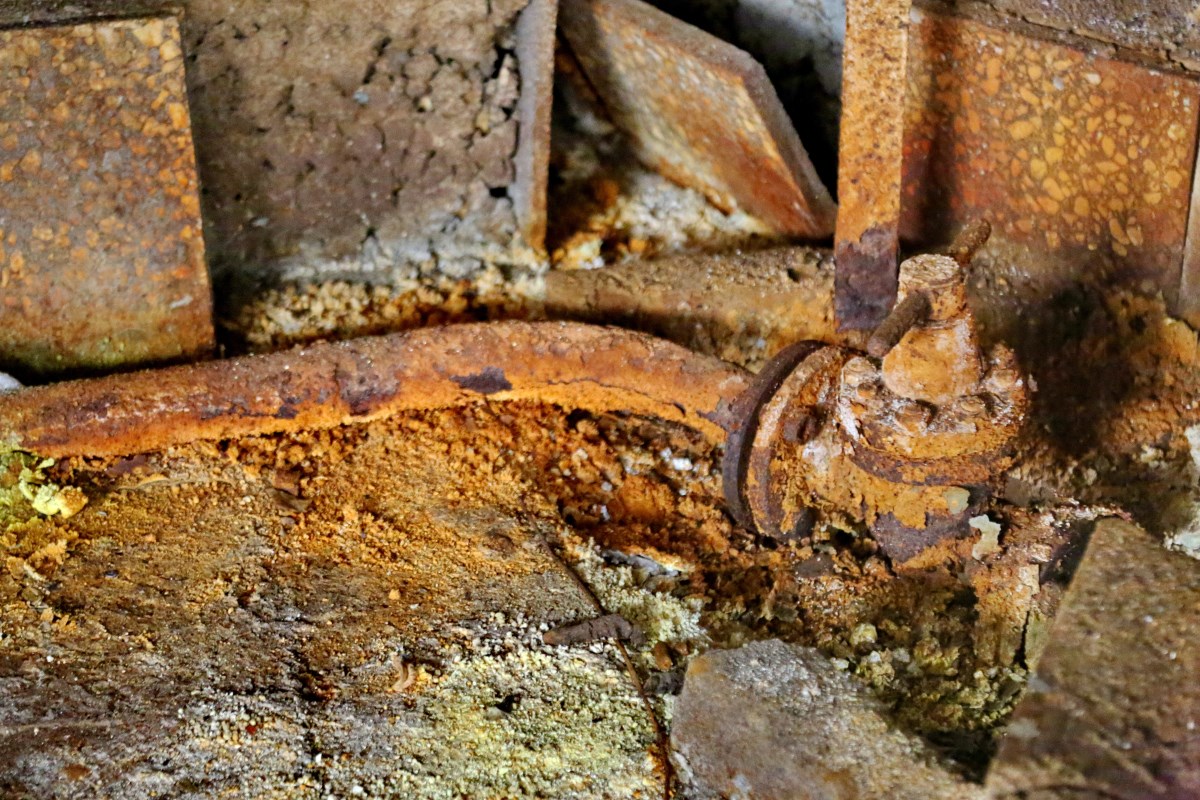 Initially unaddressed was the fate of the large tanks of trichlorosilane, a clear liquid that is both flammable and corrosive enough to separate muscle from bone.

In 2011, the government under Prime Minister Almazbek Atambayev allocated 6.4 million soms ($152,000 at the time) to deal with the problem. A former colleague of Kalmurzaev’s, a scientist who requested anonymity, showed Eurasianet government documents dated from May 23, 2011, that confirmed the order to dispose of the chemicals.

But the money was never used for its intended purpose.

“The lifespan of the tanks is only 12 months, but they’ve been standing there for 20 years,” the scientist said.

There are “huge risks” of the rusting tanks exploding during the middle of Tash-Kumyr’s summers, when temperatures regularly rise over 40 degrees Celsius, or in winter, when fierce winds batter the area, the scientist added.

“If that happens, the air, earth and water will be poisoned. There will be tragic consequences not only for Tash-Kumyr and Jalal-Abad, but for the whole region.”

Tash-Kumyr’s new mayor, Kelsinbek Bektemirov told Eurasianet that local authorities are ready to get involved in the waste disposal effort if funds are forthcoming.

During an interview in his office, both Bektemirov and his deputy cast doubt on the crypto mining firm’s claim that the chemicals in the tanks are still the responsibility of TSP – the Bakiyev-linked company that was nationalized.

Computer Power Center LLC agreed to take on all assets when they concluded the deal, the officials have said. 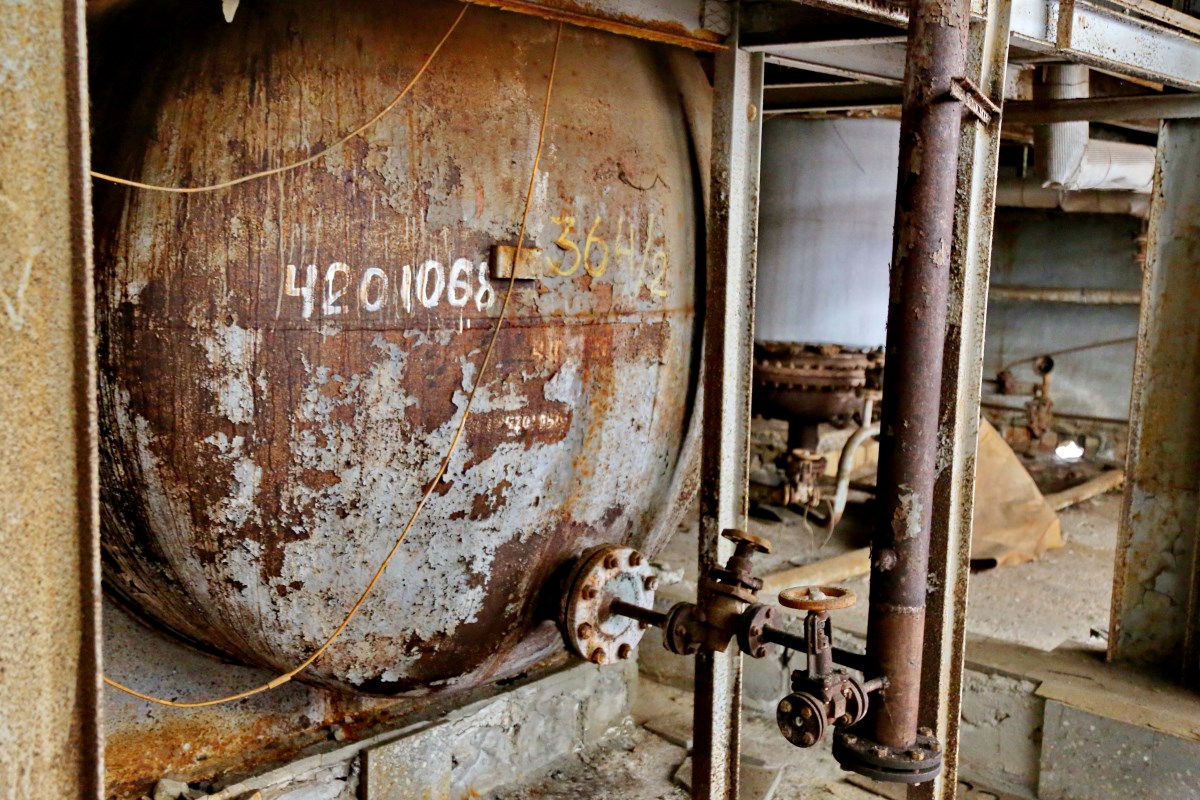 Leaks at the site – albeit small ones with no visible effects on the surrounding area – have been reported in the past.

Back in 2017, Tash-Kumyr’s prosecutor received complaints about a leak at the plant and requested government inspections. In response, the Jalal-Abad region Interdistrict Court ordered the destruction of the chemicals under specialist supervision. But no work has taken place to this day.

Bishkek-based activist and photographer Vlad Ushakov, one of the co-founders of ecomap.kg, a map of environmental stress around Kyrgyzstan, was able to enter the plant in 2020 and document what he said were signs of the leak and a slapdash attempt to fix it.

“You can see from photos inside the plant the poor condition of the tanks. You can see where somebody tried to caulk the pipes. If the authorities continue to ignore the problem, Tash-Kumyr will face an ecological catastrophe,” Ushakov said.