In Kyrgyzstan's rush to build a key highway, homeowners suffer

Locals say authorities are arbitrarily seizing their homes to make way for a road from China. 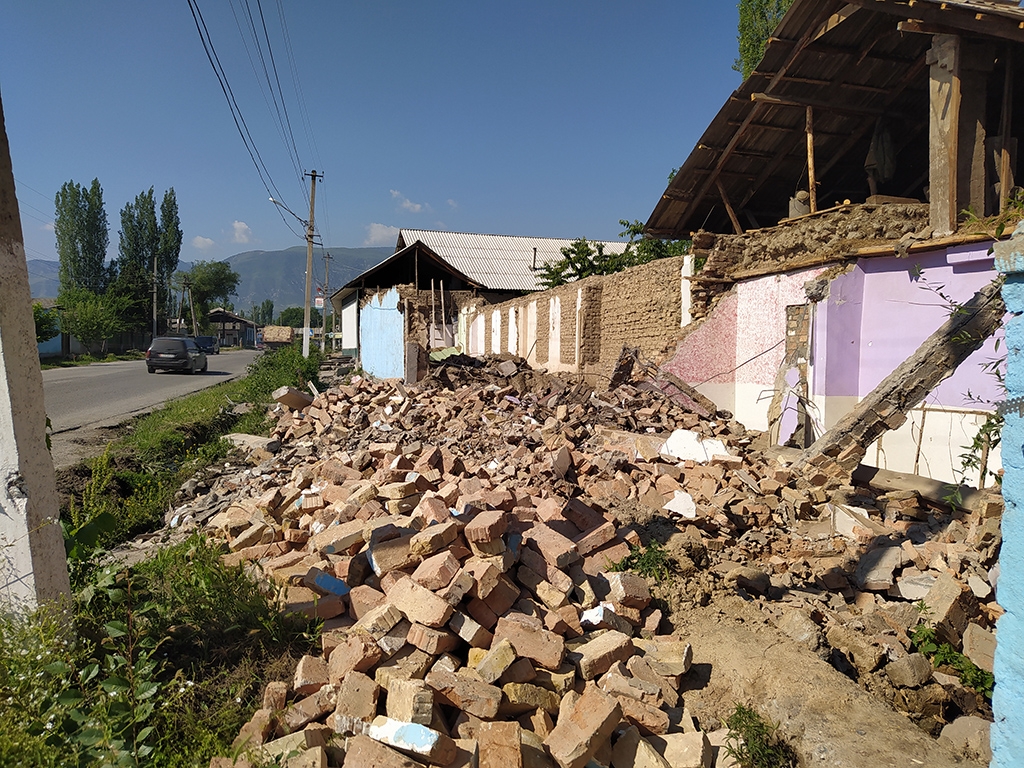 When roadbuilders overhauling and straightening a highway in southern Kyrgyzstan arrived in the densely populated town of Nookat, they bumped into a problem: homes.

Buildings that had stood there since the middle of last century are now gone or in ruins. Owners say they were given barely any chance to resist or appeal.

“I have all the title deeds in my hands, including the [document] issued by the state with all the blueprints, signatures, seals and receipts showing we’ve paid our taxes,” 52-year-old widow Muzafat Zhurayeva, a mother to two children and grandmother to three, told Eurasianet, fighting back the tears. 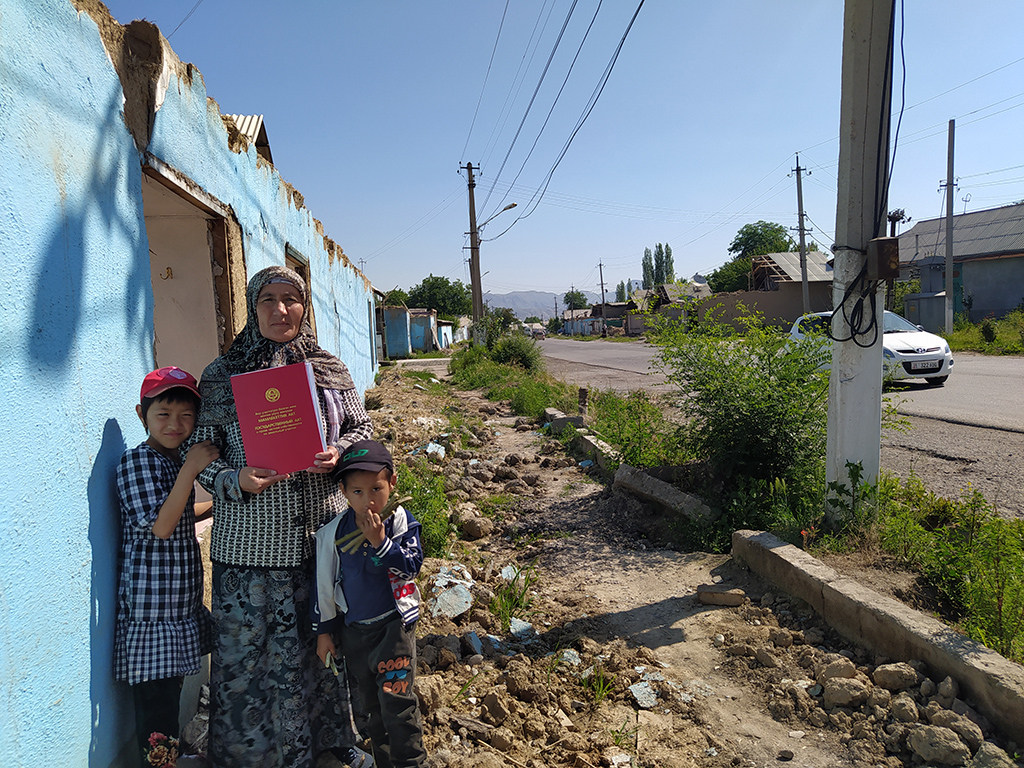 Showing Eurasianet around what was destroyed during the demolition, Zhurayeva recalled the days of her childhood, when her parents, from whom she inherited the home, would treat guests to hot green tea and rich portions of Uzbek plov with raisins and quince.

“It is so disheartening that the state has with the stroke of a pen made our lives, which were already miserable, even harder instead of helping disadvantaged families. We are not against the expansion of the road, but let the authorities at least pay us compensation,” Zhurayeva said, turning her head up in a plea to the heavens.

Her neighbor across the street is in a similar predicament. Papers in hand, Yulduzhon Ismailova, 43, lamented how part of her house, along with the front gate, had been targeted for destruction.

“If you look here, you can see the traces from the excavator bucket,” she said, pointing to the remainders of a window frame. “We begged them not to smash it, that way we could at least take it apart ourselves to sell for building material and make some money.” 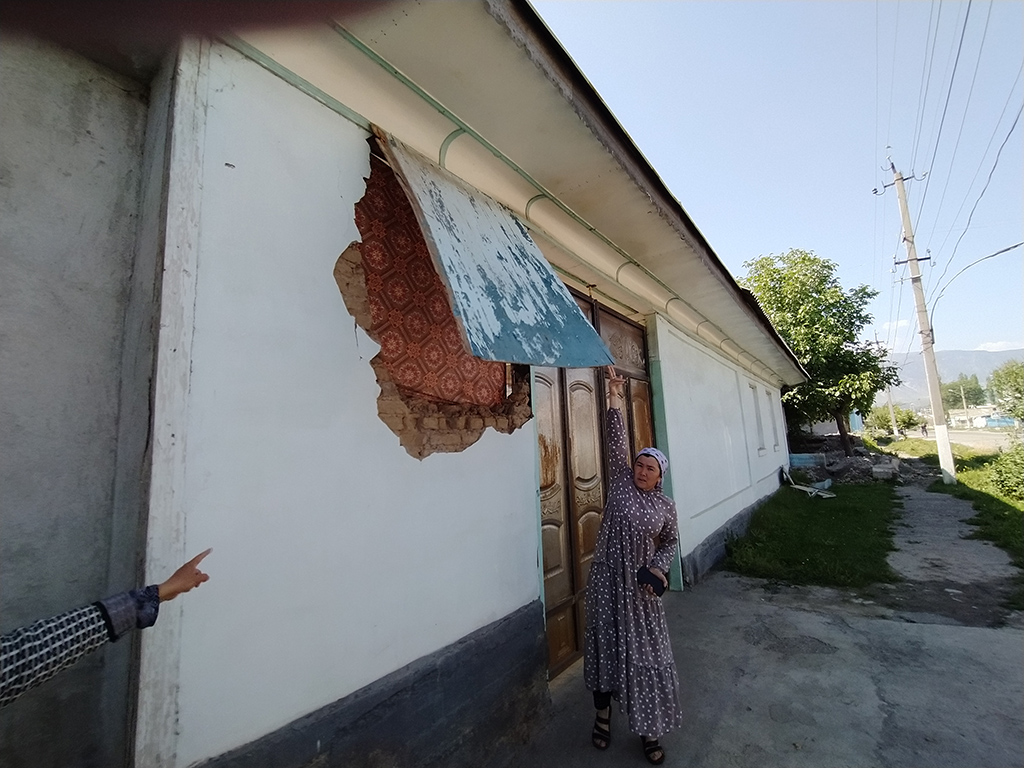 Echoing the charge made by many neighbors, Ismailova said the workers came with little forewarning.

“We were not given any notifications about the demolition or seizure of the house. Otherwise, I would not have taken out a 1 million som ($12,300) loan that I have already spent on improving the home. If it is all destroyed, we will simply have nowhere to live,” Ismailova said.

Homeowners along the Nookat road question why so much land had to be reclaimed for the works.

Abdishukur Mirzakhamdamov said if the highway had been expanded by only two-three meters, instead of 14 meters or so, no homes would have had to be damaged.

“When I asked why such a wide road was needed, they answered that in addition to the road, sidewalks and flowerbeds needed to be laid down,” he said with a bitter laugh.

Disgruntled residents have turned to nongovernmental organizations for legal aid in trying to claw back some consolation for their losses. The Osh office of Interbilim, a group whose work concentrates in part on improving people’s access to justice, has stepped in.

Gulgaky Mamasaliyeva, head of Interbilim’s Osh office, was categorical in describing the way in which the authorities summarily destroyed people’s homes as a clear violation of fundamental human rights.

“In May, we went to demolition sites and did door-to-door visits. We found that only a few people had received notifications from local authorities. And they cited norms outlined in the Code of Administrative Responsibility. That document ceased to be valid as of January 1, 2019,” Mamasaliyeva said.

Mamasaliyeva said the notifications were, in any event, issued within an unreasonably tight timeframe. Homeowners were given only three days to brace themselves, and even then, workers arrived within two days and began bulldozing dwellings and commercial property.

“According to the second paragraph of Article 15 of the constitution, property is inviolable and no one can be arbitrarily deprived of their property. Its confiscation in defiance of the will of the owner is permitted only through a court decision,” Mamasaliyeva said.

International treaties state the same. Article 17 of the Universal Declaration of Human Rights, to which Kyrgyzstan is a signatory, states that “no one shall be arbitrarily deprived of [their] property.”

Compensation lawsuits are now the only recourse open to the dismayed homeowners, since the determination to make the project go smoothly is coming from the very top.

The stakes for this project were laid out during a works inspection visit in February by Deputy Transport and Communications Minister Tabyldy Tillayev. The Kyrgyz government has dreams that the highway could one day see freight traffic coming through on its way from China in the east through Central Asia in the direction of the Persian Gulf, although border tensions with neighboring Tajikistan and the generally lackluster state of infrastructure in the area make this a remote prospect for now.

Fully $133.6 million have been earmarked for the highway reconstruction. Of that total, $50 million is being spent on the 47-kilometer section in the Nookat district, which comprises the eponymous town and the surrounding territory. Funding for the work is being provided by the Japan International Cooperation Agency.

The revamped highway would not only be of importance to the economically depressed Batken region, down in a remote southwest corner of Kyrgyzstan, but stands one day to serve as a transportation route of international importance, Tillayev said in February.

Meanwhile, Nookat Mayor Ulan Turganbayev, who was appointed to his job in February, insists that residents are being untruthful when they say that they were not informed in good time that their neighborhood lay along the Osh-Nookat-Isfana highway expansion zone. What is more, Turganbayev says, homeowners tried their luck by surreptitiously expanding the limits of their property beyond what actually belong to them.

“This issue has been on the agenda since 2016. We warned all residents whose land plots lay beyond the red line that their houses would be demolished. We held meetings several times and explained things to them, but still they ignored us and continued to build up their houses on illegal spots,” Turganbayev told Eurasianet.

When Turganbayev spoke to Eurasianet, 57 private homes and 11 commercial locations in Nookat and the town’s suburbs had been either demolished by road workers or disassembled by the owners.

“As for compensation, no one will receive it because the owners of the real estate had in the first place arbitrarily seized pieces of land by the side of the road. What they build there … was illegal,” Turganbayev said.