In Moscow Pashinyan gets along with Putin, clashes with Russian-Armenian philanthropist 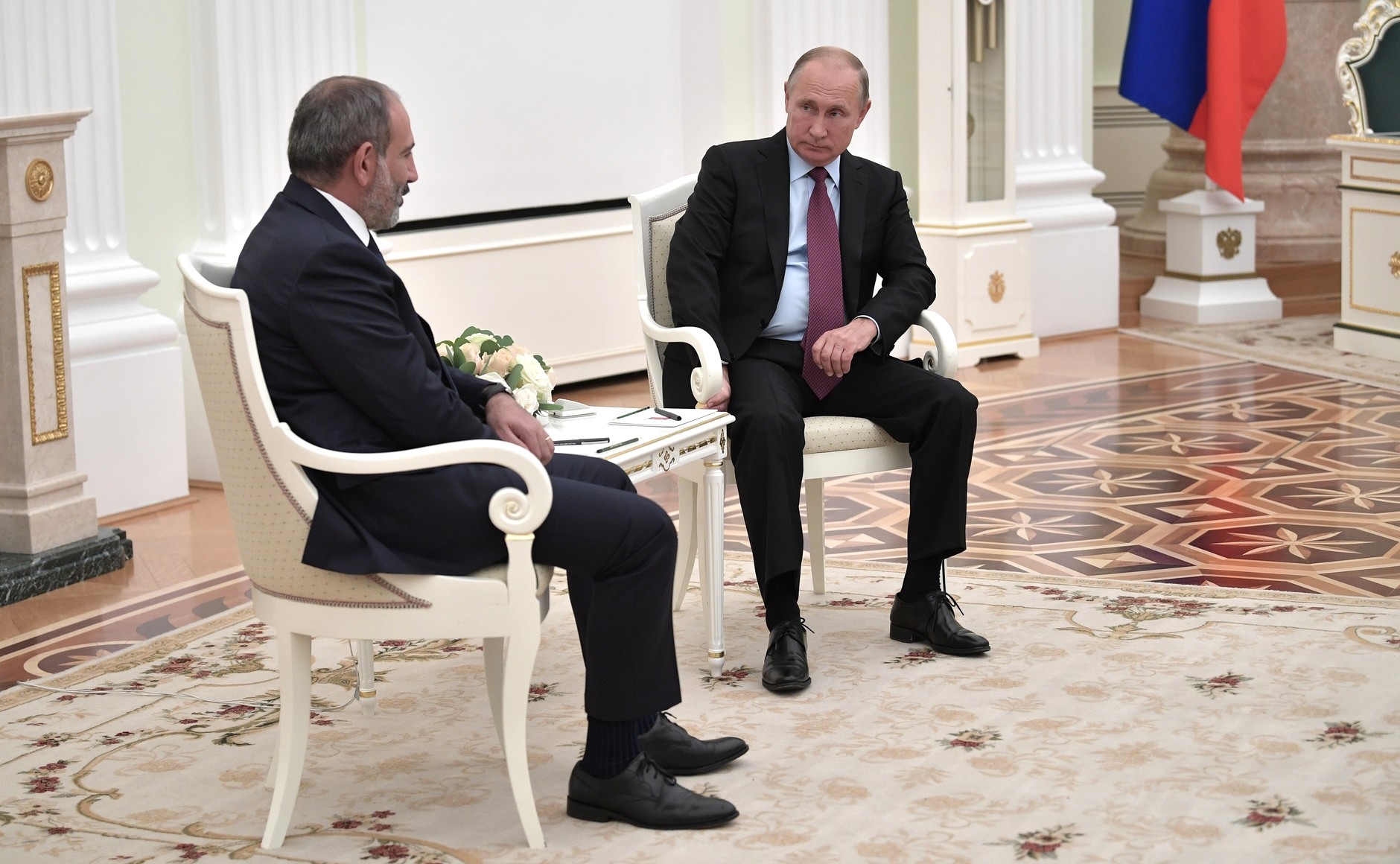 Armenian Prime Minister Nikol Pashinyan visited Moscow on September 8 for his third meeting with Russian President Vladimir Putin in the last four months. Pashinyan said the frequency of the meetings testified to the strength of the relationship, but he also tangled with a prominent Armenian-Russian businessman and philanthropist who accused Armenia's new leadership of damaging the country's investment climate.

The Armenia-Russia relationship is in a turbulent phase, as the Kremlin mistrusts the new leadership in Yerevan, which is populated by many pro-Western liberals.

Sharpening Russian concerns are the criminal charges that Armenian investigators have filed against Yuri Khachaturov, the current general secretary of the Collective Security Treaty Organization, a Russia-led military bloc, for his role in the violent crackdown against protesters in Yerevan in 2008. Prosecutors also have filed charges against former defense minister Mikael Harutyunyan, and Russia has refused to extradite him.

Nevertheless, the official part of Pashinyan's Moscow visit appears to have gone smoothly. “We didn't discuss private issues,” Pashinyan told journalists after the meeting with Putin, when asked about the Harutyunyan case. “I think it's a matter of further cooperation between the Armenian and Russian law enforcement agencies."

Alongside Putin following their meeting, Pashinyan alluded to the rocky period in relations but chalked it up to uninformed speculation. “Despite certain pessimism evident in both the Armenian and Russian media and in social networks, it is my belief that our relations are developing dynamically … I am sure that these issues will be resolved and we will continue to base our allied relations on mutual respect for the interests and the sovereignty of our countries, and the principle of non-interference.”

“There is no need to qualify our relations: they are very special,” Putin said, for his part. “It has been so for centuries, not just since you and I have started working together.”

The reception was less cordial with Ruben Vardanyan, a billionaire businessman-philanthropist, who clashed with Pashinyan at a forum with Russian-Armenian business leaders, calling the new leader “disrespectful.”

At issue was the new government's closure of the Center for Strategic Initiatives, a government-run effort to attract foreign investment that opened in 2016 and with which Vardanyan has worked.

The Center was founded and chaired by former Prime Minister Karen Karapetyan, of whom Vardanyan was an outspoken supporter. “If Karen Karapetyan and his team succeed, that means we all succeed, and vice versa,” Vardanyan said in 2016. “His failure will be our failure as well, and Karen Karapetyan’s success is vital for all of us, and I would especially emphasize, for Artsakh.” (Artsakh is the Armenian word for Nagorno-Karabakh, the territory disputed between Armenia and Azerbaijan.)

"My friends and I have invested more than $600 million in Armenia over the past 18 years. It's not a small amount. Do whatever you want. I just think you need to maintain dialogue,” Vardanyan said at the meeting with Pashinyan. “You have the right to do whatever you want with your organization, but if it’s created jointly with the private sector, and you do not even ask before closing it, but you notify us. To say the least this is disrespectful."

Pashinyan justified the move by saying it was using state money without delivering results. "People working in these centers and foundations receive two to three times more wages than ministers and the prime minister, and they do nothing," Pashinyan said. “From now on nobody will get money for doing nothing.”

Vardanyan also asked Pashinyan if he could guarantee “predictability” for business in Armenia, and Pashinyan fired back. "Now, different people, the press, talk about instability, civil war, I don’t understand. Today, the government in Armenia belongs to the people and it will always be that way. You want me to announce myself a lifelong monarch, so you could say there is a stability. It won’t happen."

Vardanyan is well known in Armenia for his philanthropic work. He founded the IDeA foundation, which conducts development projects and holds the the high-profile Aurora Prize awards. He is also a founder of the United World College in Dilijan, an elite school.

The Babayan campaign official said that at the request of the Sargsyan administration, both campaigns were funded by Russian-Armenian businessmen, including Ruben Vardanyan.

Vardanyan also is an investor in Lydian International, the company involved in the controversial Amulsar gold mining project.

Vardanyan's interests aside, official Armenian state statistics have indicated that foreign direct investment in the second trimester of 2018 – roughly coinciding with Pashinyan's time in office – is down 43.5 percent over the same period the year before.