In Muslim Azerbaijan, Self-Interest Prompts Support for Israel on Gaza 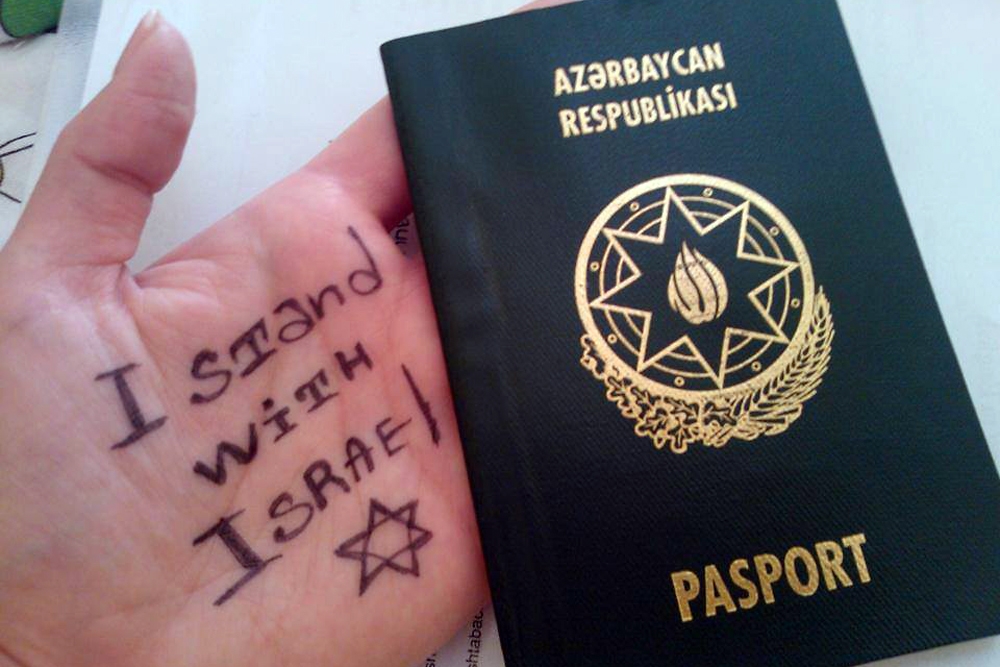 Posted July 20 on the Facebook page of StandWithUs, this photo started a social media debate about the crisis in Gaza and Israel, with more Azerbaijanis supporting Israel in the conflict in online polling. Azerbaijan has had close political, economic and military ties with Israel since the Caucasus country’s independence from the Soviet Union in 1991. (Photo: Posted on Facebook page of StandWithUs)

The Facebook photo showing a hand holding an Azerbaijani passport came with a simple message: “I stand with Israel.” For a majority Shi’a Muslim country, that may not be an expected position to take on the conflict in Gaza between Israel and Palestinians; a struggle that has left hundreds of civilians dead or displaced since July. But for many Azerbaijanis, the matter is a question of pragmatism.

“Israel supports Azerbaijan internationally and it is our strategic partner,” elaborated Araz Behbudov, a 25-year-old accountant from the Azerbaijani capital, Baku. “A strategic partnership comes before everything, and we should give it priority.”

Proof of that partnership lies in the numbers. Israel gets well over a third of its oil supplies from energy-rich Azerbaijan, and ranks as a top trade partner. Israel itself has become a critical arms supplier for the South-Caucasus country. In 2012, it agreed to sell $1.6-billion-worth of anti-aircraft and missile defense systems to Azerbaijan.

The unlikely duo’s ties date back to the early 1990s, when Azerbaijan, having regained its independence after the collapse of the Soviet Union, was struggling bitterly with Armenia and ethnic Armenian separatists over breakaway Nagorno Karabakh. In 1992, Israel was among the first countries to recognize Azerbaijan’s independence.

Officially, Baku has expressed support for a peaceful resolution of the Gaza conflict and for the peaceful creation of a “sovereign Palestinian state…”

But maintaining friendly ties with Israel, whose main ally is the United States, is seen by many Azerbaijanis as a surer way to gain access in Washington.

Politicians, for instance, tend to credit American Jewish organizations for the lobbying that resulted in a 2002 executive waiver of Section 907 of the 1992 Freedom Support Act, a measure that had banned US aid to Azerbaijan because of the war in Karabakh.

For all these reasons, Azerbaijan cannot afford not to support Israel now, reasoned Erkin Gadirli, a board member of the opposition movement Republican Alternative.

“The American Jewish lobby is necessary to neutralize the Armenian lobby in the US,” Gadirli claimed, in reference to the ongoing fight with Armenia over Karabakh. “Azerbaijanis also need Israel to stay strong against threats coming from Iran and the Middle East,” he said, speaking of Islamic terrorism. “Unfortunately, we cannot act now based on universal human-rights values.”

But at the same time, Baku has domestic reasons for its support of Israel as well. Azerbaijan is home to roughly 10,000 ethnic Jews, according to official data; most live in the district of Krasnaya Sloboda (Red Settlement) in the northern region of Guba. In general, their ties with their Muslim neighbors are strong, with no reported clashes or cases of discrimination.

Despite that background, however, some observers believe that, amidst a revival in Azerbaijan’s Islamic heritage, disapproval of Israel has started to increase since its attacks on Gaza began in July.

“It was the first time I observed serious solidarity in public opinion about attacks on Gaza, both in traditional and social media,” commented Haci Ilqar Ibrahimoglu, an imam and the chairperson of the Centre for the Protection of Freedom of Conscience and Religion.

But other public displays of that disapproval have fallen short. On July 25, the banned Islamic Party of Azerbaijan attempted to organize a protest in front of the Israeli embassy in Baku, but was prevented by police.

Last month, some Baku supermarkets also decided to stop selling Coca-Cola products from a mistaken belief that the American company is Israeli-owned. One popular newspaper columnist, Zamin Haji, put a dent in this notion, though, by pointing out that Coca-Cola Company Chief Executive Officer Muhtar Kent is of Turkish descent. The boycott, heavily ridiculed on social media, eventually was dropped.

But the online support for Israel also reflects a relatively grim side of Azerbaijani society – the government’s heavy influence on news outlets, both online and offline.

“Because of the government’s close relationship with Israel, the media covers only positive stuff and ignores anything that can damage the image of Israel,” noted Orkhan Gafarli, an Azerbaijani analyst on Eurasia at the Istanbul think tank Bilge Adamlar Stratejik Araştırmalar Merkezi. “Most Azerbaijanis do not have a chance to get [other] news about Gaza.”

While opposition and independent news outlets exist, television, the most powerful medium in Azerbaijan, is under state influence or control. Eighty-eight percent of 1,988 Azerbaijani respondents in a 2013 survey by the Caucasus Research Resource Centers stated that they believe TV news coverage is reliable.

Even those who turn to online foreign media for alternative news about Gaza still have a tendency to back Israel, continued Gafarli.

“They strongly believe that supporting Israel is part of Western identity, no matter whether Israel acts fairly or not,” he said.

Laying claim to that identity, however imperfectly understood, appears ever more desirable for many Azerbaijanis.

Over the past few years, scores of male Azerbaijanis are reported to have headed to Syria to wage jihad against Syrian President Bashar al-Assad. Supporting Gaza, ruled by Hamas, internationally seen as a terrorist organization, only would encourage that trend, argued 43-year-old Surkhan Latifov.

“It is all about serious terrorism in the region … It can transfer to Azerbaijan at any time.”

“Azerbaijan is a secular state based on democratic principles,” concluded 25-year-old Anar Masimli, an Azerbaijani student at the University of Flensburg in Germany. “In the Middle East, only Turkey and Israel share the same values. That is why I support Israel.”