In Osh, Easier to Dig Up Corpses Than Truth 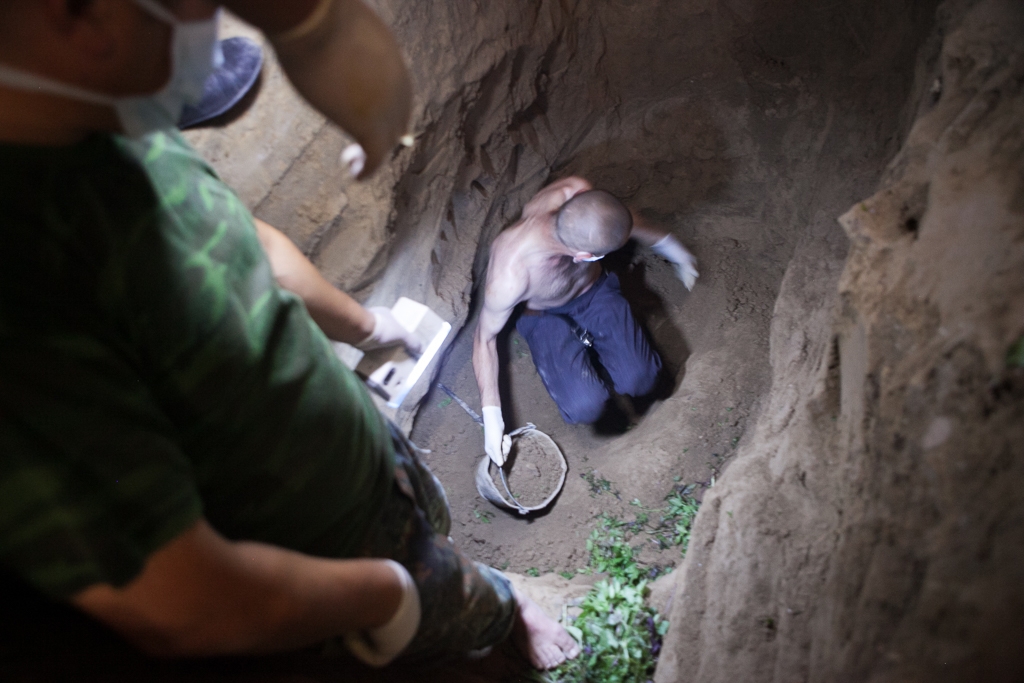 The bodies were buried five feet below the foundation of a construction site. (David Trilling)

Police sealed off a gravel road in Osh’s central Cheremushki district on Friday. Word spread quickly through the Uzbek neighborhood. Since ethnic Kyrgyz make up most of the security forces, the residents’ first response was fear: “We will be attacked.”

The details of how the recent violence in southern Kyrgyzstan started – leaving perhaps thousands dead – may never be clear. Yet for most Osh residents, the culpability is obvious. Uzbeks blame Kyrgyz and Kyrgyz blame Uzbeks. The two groups each nurse their own irreconcilable versions of how the region became deformed with fear and resentment. They generally go something like this:

Among many Uzbeks: “It was the Osh mayor. He wanted to clear out the Uzbek neighborhoods and build apartment blocks for Kyrgyz. Snipers attacked our neighborhoods. He wanted to move the bazaar out of the city, onto his own land. He had outside help from a third force, perhaps Russia, which may explain why Moscow didn’t send peacekeepers.”

Among many Kyrgyz: “The Uzbeks started a fight for autonomy by raping our women. Their leader Kadyrjan Batyrov in Jalal-Abad was using the weakness of the interim government to call for political representation. They don’t know how good they had it. They were arming themselves and we had to defend Kyrgyzstan.”

Of course Kyrgyz and Uzbeks in Osh still talk to one another. Many have been neighbors for generations. But blame has settled into a set of isolated, stagnant mythologies; the narratives divide neighborhoods and offer little room for political reconciliation.

State-sanctioned spin bolsters the Kyrgyz narrative. Kyrgyz officials complain repeatedly about the lack of “balanced coverage” of the recent carnage. The Western media is unfairly showing dead Uzbeks without covering Kyrgyz deaths as well, we foreign correspondents hear – from officials, at the front desk in the hotel, from curious people looking at my camera on the street. Uzbeks say the same, worried the world has not heard of their suffering. But the Uzbeks control fewer levers of power and can’t back their request with implicit threats, with checkpoints, mopping-up operations, and the rule of the gun.

The threat of revenge has become almost as powerful as the sweeps themselves. Uzbeks say Kyrgyz police and military units are detaining Uzbeks for inciting ethnic violence and terrorism, threatening them with repercussions against their families or fabricating evidence as a pretext for arrest. Human rights activists back up their accounts, amplified and rendered more terrifying by gossip.

Armed young men guarded that Cheremushki street corner, stopping and searching cars. They were a jumpy mix of military conscripts and police. It was difficult to tell because of their outfits: a polo shirt, fatigues and Adidas sneakers on one; a “US Army”-embossed tunic with a Harley Davidson shoulder patch on another; a third wore a blue traffic warden’s shirt over black track pants.

My colleague and I pleaded with them to give us access: “Officials [i.e. you] keep telling us [Western journalists] to report both sides of the story. Here is an opportunity. Please let us past.” Each recklessly gripped his Kalashnikov – “please stop pointing that at my belly” – and dithered, scared of his seniors, uncertain of his own place in the hazy chain of command.

Eventually, we flagged down a senior officer. He explained that Kyrgyz police had died in the conflict, too, and let us through.

The bodies were buried five feet below the foundation of a construction site, surrounded by the charred skeletons of houses and the remains of the stones and tree trunks the frightened residents had used to keep out Kyrgyz gangs three weeks before.

I photographed the bloated body of one of the missing officers, identifiable only by his blue police pants. Half a dozen officials in surgical masks, snapping photos on their cell phones, pointed to the pants repeatedly: “See, it’s our colleague.” They packed him in a salad of mint and mustard greens, trying to hide the smell.

A police spokesman videotaping the exhumation said “six Uzbek suspects” had been arrested nearby. “One of them is a hajji,” said a young officer, alluding to the weak government argument that radical Islamists sparked the violence. Observant “Muslim” is blurred with “extremist.” Another said the bodies had been mutilated, though what I saw suggests this is yet another unfounded rumor waiting to be unleashed on the terrified city.

“It’s hard for us. We knew and worked with these guys,” one officer said softly.

Inside the brick foundation, a sweaty group of shirtless policemen was exhuming the second body and passed me a handful of salad to cover my nose.

“People don’t kill police even during wars,” said one who called himself Chingiz. “What kind of animals are they? We should destroy Uzbeks.”

I called a friend, a local Uzbek journalist, to tell him about the bodies.

“The police will take revenge – 120 percent,” he forecasted.

There is a precedent. In the village of Nariman, two ethnic Uzbeks died and 20-some were injured in a sweep on June 21. Apparently, police told residents the attack was in retaliation for the murder of two police officers there in the early days of the conflict. Authorities detained rights activists investigating the clash.

In Osh, anger has replaced due process, entrenching the blame, ensuring the parallel narratives never cross into a neutral area where they are open to challenge. The interim government promises a fair investigation, but has little control in southern Kyrgyzstan. Perhaps afraid of what investigators might find, Bishkek has ignored calls for the inquiry to be internationally led. In this environment, violence has become a legitimate tool for addressing grievances. Healing – and a sustainable political system based on an established rule of law – is on hold, leaving many Uzbek families no choice but to emigrate.

There’s an old joke being repeated here again: “Optimists learn a foreign language; pessimists learn how to use a Kalashnikov.”