The previously apolitical figure has emerged as a challenger to the embattled prime minister. But his chances of success aren’t clear. 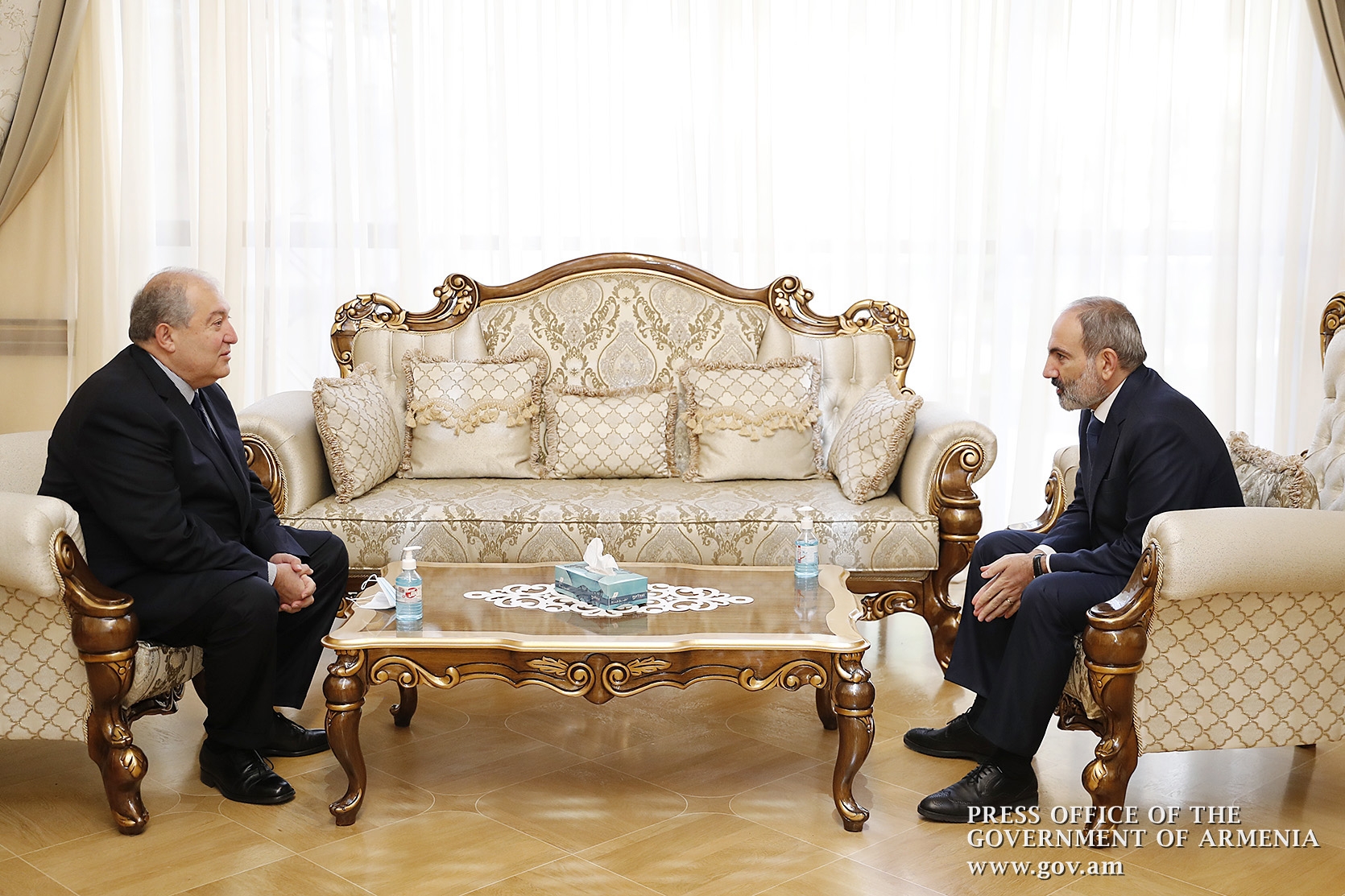 As Armenia suffers a deep political crisis and Prime Minister Nikol Pashinyan fights for his political life, one figure has shown himself to be particularly ambitious.

President Armen Sarkissian, previously little more than a figurehead, has in the weeks after the war with Azerbaijan tried to position himself as a key political player. He has distanced himself from the controversial ceasefire agreement, called on the government to resign, and made a “private” visit to Moscow.

“In any country where a tragedy like this [the defeat in the war] happens, there is a solution: the government that is responsible has to resign,” he told members of Russia’s Armenian diaspora on November 28 during his Moscow visit. “If a politician is strong enough he can come back later. The last elections took place two and a half years ago. Now we are living in a different country.”

It all has fueled speculation that Sarkissian is aiming to replace Pashinyan. While Pashinyan has been badly weakened by the loss in the war, he has managed to stay in power so far in large part due to an absence of any credible alternative. Sarkissian – a relatively apolitical figure with a calm demeanor that contrasts with Pashinyan’s impulsiveness and who has proved himself adept in the international arena – is the rare exception. But how he may be able to capitalize on that status remains unclear.

Sarkissian’s entry into the spotlight contrasts to his modest political ambitions before the war. He was appointed by former President Serzh Sargsyan in 2018, shortly before the “Velvet Revolution” that brought Pashinyan to power. Even while Pashinyan sought to eliminate all vestiges of the old regime, Sarkissian managed to become an ally and held on to his position, becoming a relatively gray figure in Armenia’s otherwise black-and-white political scene.

Recent constitutional changes made the position of president largely ceremonial, and Sarkissian fulfilled his duties apolitically, signing off on new laws and government decrees unquestioningly. He was perhaps best known for a photo op eating ice cream with children he invited to his residence.

Once the war started at the end of September, Sarkissian took a higher international profile, giving interviews to foreign media and making other appearances in which his command of the issues contrasted with Pashinyan’s often erratic performances.

As soon as the prime minister signed the capitulation to Azerbaijan, though, Sarkissian began to signal his distance. Within hours after the agreement was announced the president issued a statement saying he only learned about the deal from the media and that it should have been the subject of more negotiations.

The next day Sarkissian met with leaders of several opposition parties, and emphasized the importance of “maintaining the country’s stability, public solidarity and unity.” The following day he met with Pashinyan and the statement following that meeting was conspicuously terse.

On November 16, in an unprecedented address to the nation, Sarkissian formally called for the government to resign and for a national unity government to rule until new elections could be held. He called it “the only responsible approach” to the crisis.

Sarkissian’s proposal spoke to a concern among many Armenians that the fighting between Pashinyan and the opposition has distracted from the need to address the deep crisis in which Armenia has found itself following the war.

“There is not a single force that can handle this crisis alone,” he elaborated in a later interview. “It is essential to us that the government that works is not busy every day responding to its opponents, organizing counter-protests, responding to fake news or fakes, but is busy rebuilding the country and overcoming the crisis from morning to night.”

Sarkissian has not been the only one calling for the government to resign. A coalition of 17 opposition parties, including the former ruling Republican Party and the Armenian Revolutionary Federation – Dashnaktsutyun have been doing the same, and organizing a series of street protests against Pashinyan.

But they do not appear to be on Sarkissian’s side, either. In a December 1 press conference, one opposition official mocked Sarkissian for formally signing off on a series of personnel changes that Pashinyan has been making. “Someone who is signing these decisions is demanding that the government should resign, it’s absurd,” said the official, Aghvan Vardanyan.

That coalition has instead come up with a different candidate to replace Pashinyan, local media reported: Vazgen Manukyan, who was Armenia’s first post-Soviet prime minister. Those 17 parties, however, have little public support in Armenia; the major ones have been discredited for various roles in years of corrupt rule.

Sarkissian appears to be too mild an option for the main opposition because his demand is for a new government but not necessarily for Pashinyan himself to step down, said political analyst Stepan Danielyan. “For the main [opposition] players this was unacceptable,” he told Eurasianet.

Pashinyan has so far retained the support of his coalition in parliament, My Step, which holds a dominant majority. As long as that holds, there is no way to force the government to step down.

“I can do much more”

Sarkissian has himself denied interest in taking over Pashinyan’s position. “The president of the republic has a lot to do, and he does not think about being the prime minister. He is ready to work with any government elected by the people and the prime minister, and to bring his own contribution,” he said in a November 25 interview on public television.

At the same time, he hinted that he thought he should be doing more. “I think I can do more in foreign relations, foreign economy, investments, culture and diplomacy, but I do very little,” he said. “It is quite difficult for me as I want to work, and I certainly do, but I think I can do much more.”

Sarkissian’s trip to Moscow appeared to be aimed at assessing his own chances at replacing Pashinyan, said Arkady Dubnov, a Russian political analyst of the former Soviet Union, in an interview with RFE/RL.

But it didn’t appear that Sarkissian got any overt support from the Kremlin. And Russian President Vladimir Putin subsequently gave Pashinyan a boost, praising the prime minister for what he called “courage” in signing the ceasefire agreement.

“I have to say, this decision was certainly painful, but necessary and required great courage from the prime minister,” Putin said during a video conference summit of the Collective Security Treaty Organization on December 2. “Our task is to support the prime minister of Armenia, and his team, in order to return to peaceful life, to implement the adopted decisions, to help the people who are in a difficult situation.”

Note: This piece originally identified Aghvan Vardanyan as a member of the Dashnaktsutyun party. It has been corrected.