The escalation came as Azerbaijan has been trying to push Armenia to speed up the construction of a new road connecting Armenia to Karabakh. 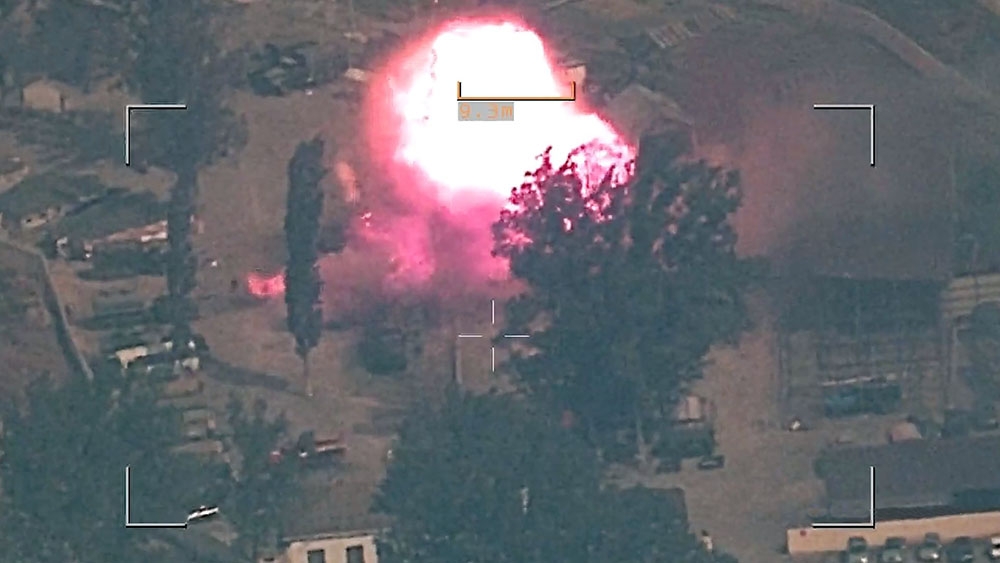 An image released by Azerbaijan's defense ministry which said it depicted a strike on an Armenian position on August 3.

Azerbaijani armed forces claim to have captured several strategic heights in Nagorno-Karabakh following an offensive that has so far resulted in three soldiers killed and at least 19 wounded.

Azerbaijan’s Ministry of Defense said in an August 3 statement that it had captured the territory in an operation it named “Revenge,” following the death of an Azerbaijani soldier earlier that day.

Karabakh’s armed forces reported that two of its soldiers were killed and 19 wounded as a result of fire from artillery, grenade launchers, and armed drones. Most of the injured were wounded as a result of drone strikes, Karabakh’s human rights ombudsman said. The territory’s de facto leader, Arayik Harutyunyan, declared a partial military mobilization.

Azerbaijani officials and pro-government commentators said that the offensive was the result of Armenia’s failure to withdraw its troops from its protectorate of Nagorno-Karabakh. That pullout was one of the conditions of the ceasefire agreement that ended the 2020 war between the two sides, and on July 19 Armenia said the pullout would be complete by September.

“What are illegal Armenian armed units still doing on Azerbaijan’s internationally recognized territory?” asked Azerbaijani diplomat Nasimi Aghayev on Twitter. “They should all have been withdrawn in line with [the ceasefire] statement. Armenia didn’t do it & bears all responsibility for current tension in the region."

The fighting appeared focused on the area between the Lachin and Kelbajar regions. Azerbaijan’s military said that it had captured a height called Saribaba, which lies just north of the Lachin corridor, the road that leads from Armenia into Karabakh. That road has become an issue of contention in recent weeks, as Azerbaijanis are nearing completion of an alternate road to connect Armenia with Karabakh, and are demanding that Armenians withdraw from the villages along the current road when that happens.

Armenian officials at the end of July said that they would begin work on the Armenian section of that road in August. On August 2, Harutyunyan said that “the Azerbaijani side, via the peacekeepers, demanded to organize a shift to the new route as soon as possible.”

That demand is “not legitimate,” the chair of Armenia’s National Security Council, Armen Grigoryan, said the next day. He argued that the 2020 ceasefire agreement stipulated that the two sides had three years to work out a plan for a new route, and that Armenia had not agreed to any plan yet.

“Armenia refuses to sign the peace treaty and free the Lachin corridor, as stipulated in the trilateral statement from 2020,” wrote Fariz Ismailzade, the vice rector of the ADA University, on Twitter.

Russia, which maintains a 2,000-strong peacekeeping contingent in Karabakh, blamed Azerbaijan for the fighting. “In the region of the Saribaba height, the ceasefire regime was violated by the Azerbaijani armed forces,” Russia’s defense ministry said in an August 3 statement. “The commanders of the Russian peacekeeping contingent, along with representatives of the Azerbaijani and Armenian sides, are taking measures to stabilize the situation.”

The escalation led to widespread disgruntlement among Armenians about the peacekeepers’ inability to stop the fighting. Armenian Prime Minister Nikol Pashinyan recalled another recent Azerbaijani seizure of a slice of territory, near the village of Parukh, and that the Russians also were unable to prevent that. “As such, there is a need to clarify the details of the peacekeeping operation,” Pashinyan said at an August 4 cabinet meeting.

The violence was preceded by several days of tension and lower-intensity fighting.

On July 30, Azerbaijani Defense Minister Zakir Hasanov “ordered [Azerbaijani troops] to be constantly ready to immediately and resolutely suppress any possible provocation of the opposing side,” the defense ministry reported.

On August 1, Nagorno-Karabakh’s armed forces reported that its troops had pushed back repeated Azerbaijani attacks, but insisted that the situation was relatively calm. "Everything is under the control of our armed forces," said Davit Babayan, Karabakh’s de facto foreign minister.

The next day, Karabakh authorities reported that one soldier had been injured and that the situation remained tense. Azerbaijan’s defense ministry denied that there had been any ceasefire violations in or around Karabakh.

“This particular escalation may be connected to two things,” Armenian analyst Aleksandr Iskandaryan told BBC Russian. “First, that Russia is now busy in Ukraine and has no time for Karabakh. And Azerbaijan is trying to test the red lines here, how far it can go. The second is that negotiations are ongoing and Azerbaijan is adding various forms of pressure to the negotiating process.”

Armenian and Azerbaijani diplomats have been meeting regularly to try to work out a peace deal to formally resolve the decades-old conflict. But there are several thorny issues to work through, including delimiting the border between the two countries, the nature of new transportation corridors in the region, and above all the fate of Nagorno-Karabakh itself and its current ethnic Armenian population.

Foreign diplomats, including from the United States and the European Union, called for an end to the fighting. “We urge immediate steps to reduce tensions and avoid further escalation.” the State Department said in a statement. “The recent increase in tensions underscores the need for a negotiated, comprehensive, and sustainable settlement of all remaining issues related to or resulting from the Nagorno-Karabakh conflict.”

By the morning of August 4 heavy fighting appeared to have stopped.

Negotiations to stop the escalation had resulted in an agreement for Armenia to open its section of the new Lachin corridor by the end of August, reported Edik Baghdasaryan, the editor of the Armenian news website Hetq. “If, of course, the Azerbaijanis do not break the agreement, our side should build a road bypassing Berdzor [the Armenian name for Lachin] and hand over Berdzor,” Baghdasaryan wrote on Facebook on August 4.