The recent violence toward LGBTQ+ activists and media in Georgia follows a long history of government inaction against radical right figures. 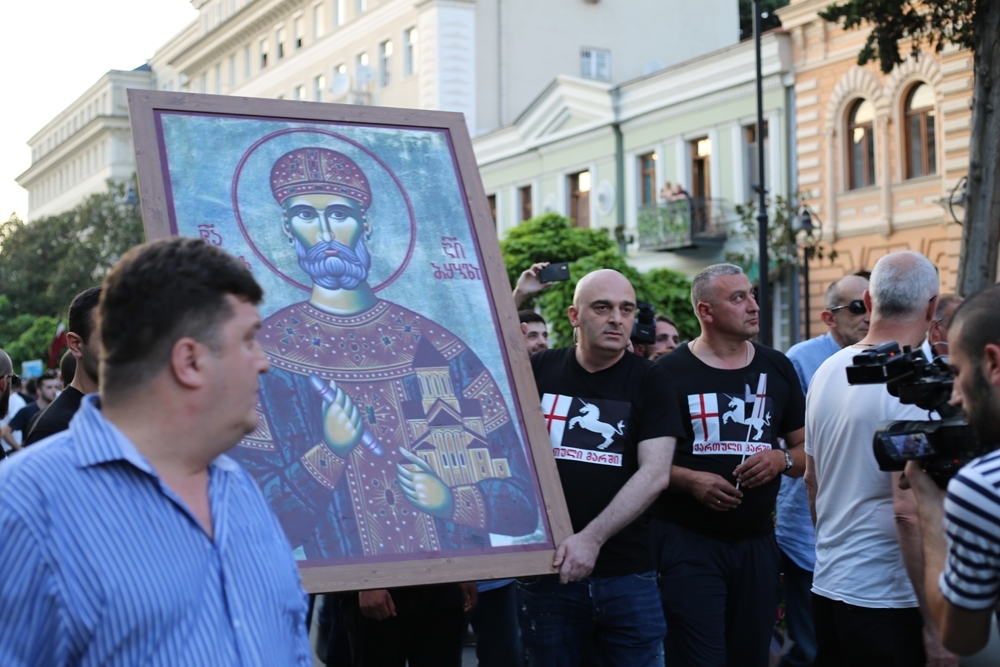 As it weighs options for dealing with the recent rash of homophobic riots, the Georgian government appears stuck between two countervailing pressures: demands from its Western partners to prosecute the perpetrators and instigators of the violence, and its electoral prospects in the fall.

Thus far, the government has responded only tentatively to the wave of violence that engulfed Tbilisi on July 5, when religious and far-right groups sought to thwart a planned LGBTQ+ pride event. Dozens of reporters covering the events were attacked, and one later died.

Georgian authorities have arrested scores of rioters identified as taking part in the violence but have stopped short of going after the leaders of the groups that organized the attacks, which included senior clergy from of the powerful Georgian Orthodox Church.

This selective response, coupled with statements from Prime Minister Irakli Garibashvili that the state would not protect the rights of queer Georgians, is a dog whistle to conservative and religious voters, said Kornely Kakachia, the director of the Georgian Institute of Politics, a Tbilisi-based think-tank.

The ruling Georgian Dream party is guided more by opportunism and a survival instinct than any ideology, Kakachia said. “They are now trying to borrow some of the vast influence of the Georgian Orthodox Church to make it through the upcoming election,” he told Eurasianet.

Elections in the fall are for local offices, but they will effectively be a referendum on Georgian Dream. Under a European Union-brokered compromise following contested parliamentary elections last fall, if the ruling party fails to get 43 percent of the vote, then snap national elections must be held.

“Garibashvili particularly caters to hardline conservative interests,” Kakachia said. “Georgian Dream is trying to cater to the socially conservative body of voters as the party finds itself in a do-or-die situation.”

Further underscoring the issue’s salience to the upcoming elections, posters have begun appearing around Tbilisi depicting various enemies of the ruling party – opposition political figures, critical journalists, and anti-government activists – with an LGBTQ+ movement leader, and a rainbow shining over all of them. “Say no to the UNM,” or the main opposition party United National Movement, they read. Georgian Dream denied any involvement with the posters, though Garibashvili had earlier linked the UNM with an LGBTQ+ agenda.

All this, however, is putting the ruling party at odds with Georgia’s European and American partners, who have called for bringing to justice everyone who had a role in the violence of July 5. “There needs to be a very clear, strong message from the Georgian authorities that there are consequences for those who incite violence,” United States Ambassador Kelly Degnan told reporters, adding that a failure to hold both organizers and perpetrators responsible would be an invitation to more violence.

It was amid this Western criticism that police questioned and searched the apartments of several leaders of the groups involved in organizing the attacks, including that of Zurab Makharadze, the founder of Alt-Info, a right-wing online platform that has been one of the main nodes of illiberal messaging in Georgia. Makharadze and several other figures were questioned but later released without charges.

“What is really going on here is that we have an election in fall,” said Makharadze, in comments on Alt-Info made after he was questioned. “If we get arrested now […] it will be clear that we are being arrested at the behest of the American ambassador.”

There also has been internal criticism of the authorities’ soft touch against the hard right groups. “Although group violence could be foreseen, the Ministry of Internal Affairs did not take effective preventive measures to prevent violence, neither has it responded fully or adequately to the criminal facts so far,” the office of the ombudsman said in a statement, which identified “specific individuals and the mobilization of certain groups in society” as well as clergy for stoking the attacks.

Even before the attacks, though, police and security officials privately warned members of Tbilisi Pride – the lead group in organizing the LGBTQ+ events of July 5 – that they would not confront radical leaders, said the head of the group, Giorgi Tabagari.

“They told us directly that they were not going to raise their hands against them because of their links to the Patriarchate [the governing body of Georgian Orthodox Church],” Tabagari told Eurasianet. Police have denied these allegations, saying that they merely warned the activists of the threat.

The official indifference to the rising influence of far-right groups has a long history in Georgia.

Following an infamous mob attack on a pro-LGBTQ+ rally in 2013, the government was criticized for its slow and inadequate response. Human rights groups then presciently warned that impunity for the organizers of the attacks would lead to more violence in the future.

Since then, attempts by LGBTQ+ rights groups to hold public events have been constantly met with varying degrees of harassment and violence. This has most often taken place on or around May 17, when activists attempt to mark the International Day against Homophobia, Biphobia and Transphobia (IDAHOBIT). The church has responded by dubbing May 17 the Day of Sanctity of the Family and putting on a spectacle with processions, icons and national outfits in an apparent effort to crowd out the queer activists.

With the government looking the other way, the far-right movement has been growing, changing form and shape. Many of the radical groups and personalities have clustered around Levan Vasadze, a businessman and self-styled guardian of the Georgian faith and traditions.

In recent years, Vasadze has been organizing and leading the violent response to LGBTQ+ activists from downtown Tbilisi. Police have been tasked primarily with forming a human wall between angry crowds and LGBTQ+ rights activists. And while low-level offenders have frequently been arrested, little to no legal action has been taken against leaders like Vasadze, even as they openly defied the law.

One Tbilisi-based lawyer, Ted Jonas, has attempted to take Vasadze on in the courts. In 2019, Vasadze called for groups of men to mobilize, arm themselves with sticks and belts, and confront a planned LGBTQ+ event. Jonas filed a complaint with the General Prosecutor’s Office outlining how Vasadze’s words and actions at the time amounted to crimes punishable by Georgian law, including threat of bodily injury, public incitement to violence, and persecution of people for exercising their rights of free speech and assembly.

“I put together all the facts, pretty much wrote the indictment for them,” Jonas told Eurasianet. “I got a two-sentence response from a deputy’s deputy at the Tbilisi Prosecutor’s Office saying that Vasadze was under investigation only for forming illegal militias.”

Even that investigation went nowhere and Vasadze has continued his activities unimpeded. He didn’t take part in this year’s riots, but lent his support from Turkey where he is undergoing treatment for an unspecified illness.

The failure to set a precedent of legal action against extremists further “committed the government to the path of such conduct, when they are reluctant or afraid to hold leaders of violent groups accountable for gross violations of law,” Jonas said. “Even if they did not want to arrive at this point, the government is now clearly committed to the right-wing course of action, speaking out against gay rights and the media.”