For some Afghans trying to make a new life abroad, Tajikistan feels like a step backwards. 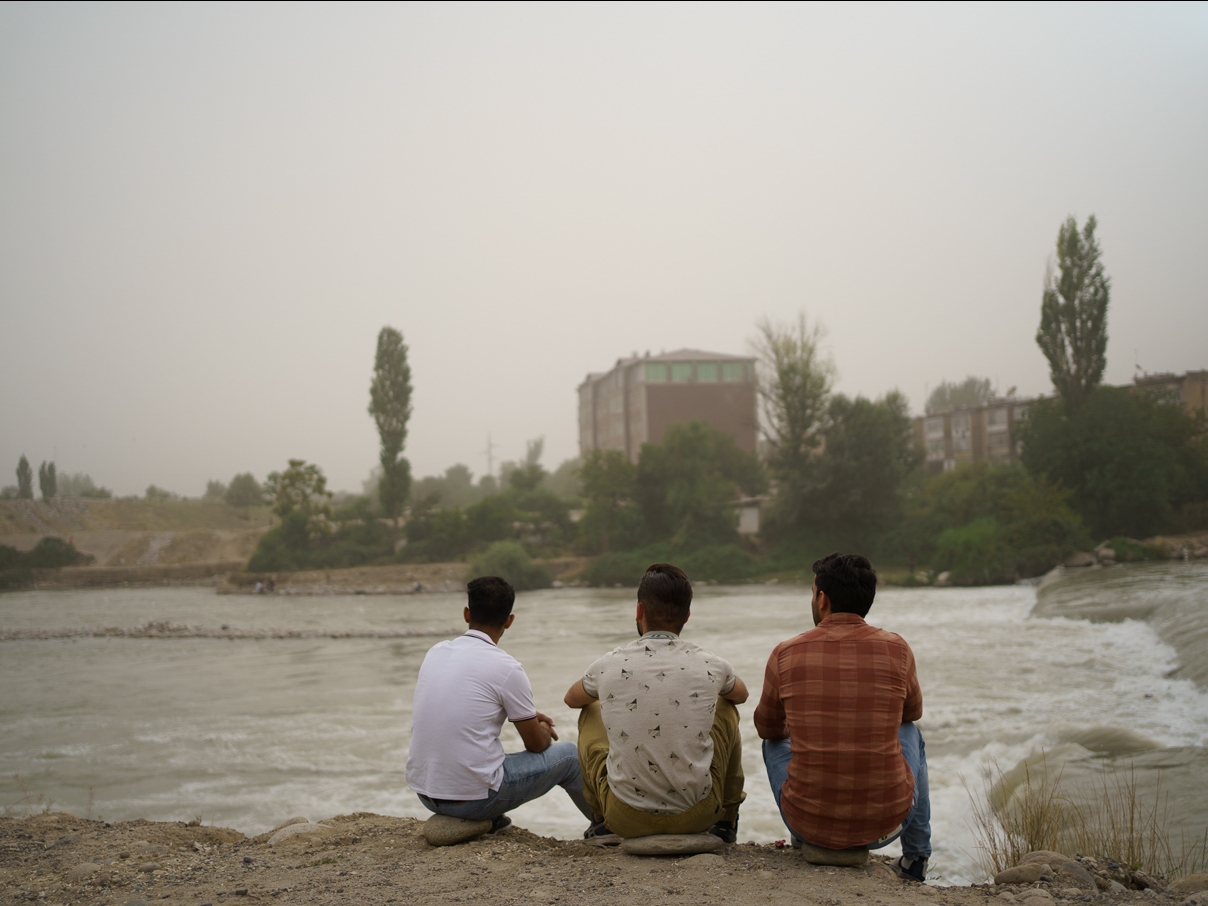 Omar Khammosh and friends like to hang out by the river in Vahdat. (photos by Thijs Broekkamp)

At the center of Omar Khammosh’s latest painting is an old woman, crying and hugging a man.

Zoom out to the edge of the frame and another man is seen from behind, watching their embrace. He is holding a Kalashnikov and framed in bright red: blood. The woman, says Khammosh, is full of sorrow for the world she is leaving her children.

Afghanistan’s misery is a recurring theme in Khammosh’s work.

“I cannot express my feelings, my message, with behavior or words. I need to do this through my art,” he says. “I want to show the pain of my country, of the Afghans, of myself, through art.”

For that pain he blames the fanatics now ruling Afghanistan, the men he fled.

Khammosh, 32, has lived with his family in Vahdat, a town about half an hour outside Tajikistan’s capital, since early 2021.

He had been threatened by the Taliban for his sculptures, which offended their strict interpretation of Islam. One day gunmen came to his Kabul home. He wasn’t there. They shot and killed his father.

After his father’s murder, Khammosh and his family – his two brothers, two sisters and his mother – fled north to Tajikistan. “We thought it would be easy for us because we speak the [same] language. But being a refugee has many challenges, even if you speak the language.”

On a sweltering day in smoggy Vahdat, Khammosh takes Eurasianet for a tour of his new world. Seemingly everywhere he bumps into Afghan friends. Warm embraces and lively banter follow. He points out meeting spots: the riverbank, the soccer field where several Afghan teams practice, the park with the portrait of Tajik President Emomali Rahmon that fills with Afghans at night, and several Afghan-run ice cream parlors specializing in pistachio, saffron and cardamom. He points out the businesses owned by Afghans; the fruit stall, the supermarket, little shops, clothing stores. 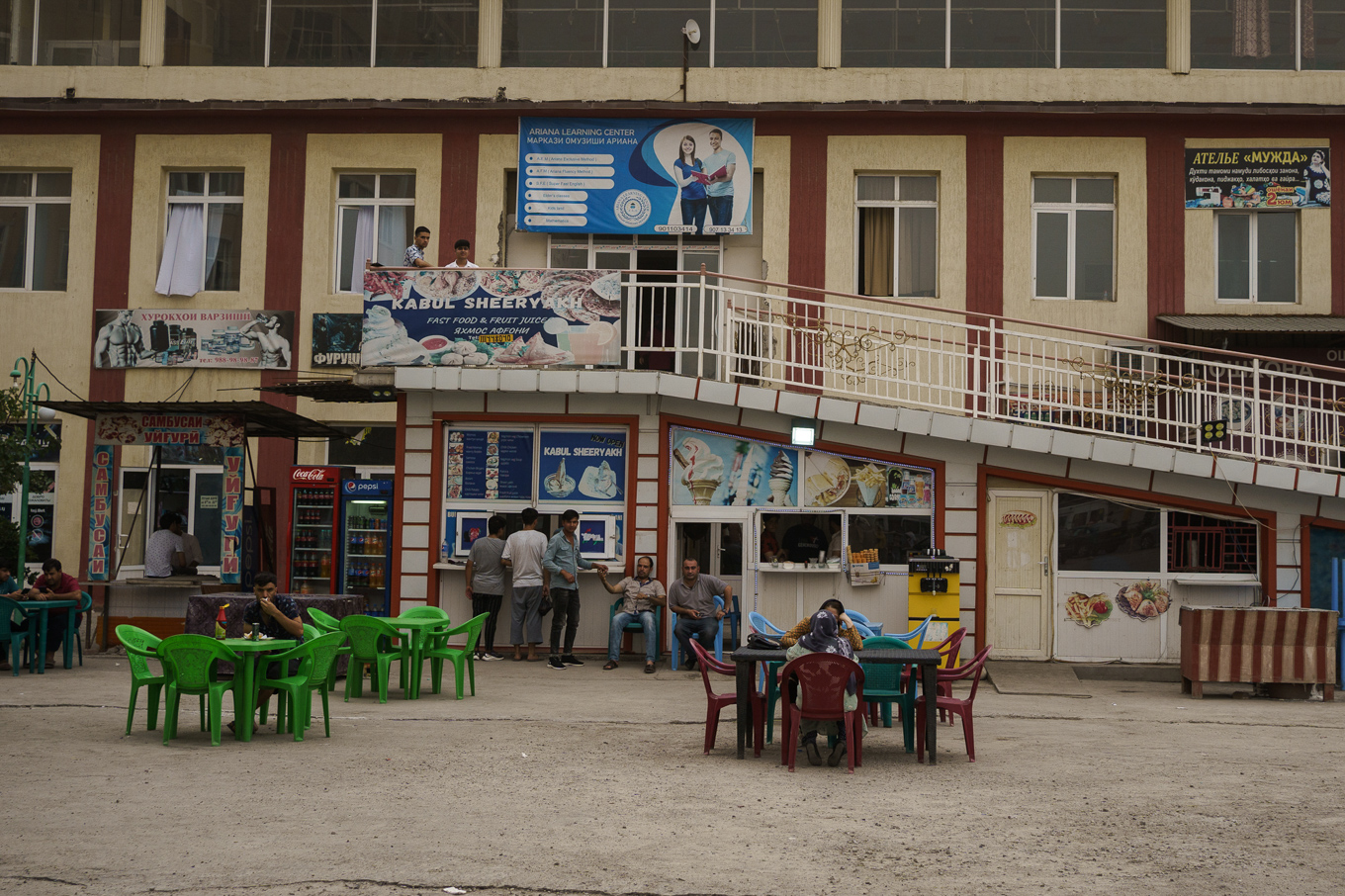 Even before Kabul fell to the Taliban a year ago this week, a large community had taken up residence in Vahdat. Tajik regulations were more relaxed back when they arrived in the late 2010s, when the Western-backed government was still in power.

After the Taliban takeover, Dushanbe initially said it would receive up to 100,000 Afghan refugees.

But jobs are scarce in Tajikistan. Roughly half of working-age men leave to labor abroad. The economy is always poor, but new economic downturns – from COVID, from Russia’s war in Ukraine – have further raised prices for staple goods.

This may explain why the government has not fulfilled its promise.

The United Nations Refugee Agency (UNHCR) says that there were just over 8,500 Afghan refugees and asylum seekers in Tajikistan by this summer. Of those, 5,700 arrived after the Taliban took over last August – a little over 5 percent of what Dushanbe committed to taking.

Even so, Tajikistan remains the only country in Central Asia to accept Afghans.

The rules are strict: Refugees are not allowed to reside in major cities such as Dushanbe and Khujand. But they are eligible to receive healthcare, to work, and to send their children to school.

Getting those rights is not easy. Afghans must first navigate the Tajik bureaucracy to receive refugee status. Several who spoke on condition of anonymity said they had been asked for hefty bribes by Interior Ministry officials responsible for issuing documents – the asking prices ranged between $1,000 and $3,000.

The UNHCR acknowledges it has heard of such shakedowns. While recognizing that “many asylum-seekers and refugees across the world are fearful of reporting incidents of corruption due to perceived ramifications that it might have on their status,” the aid agency told Eurasianet it “urges” refugees to report corruption to Tajik government hotlines.

Afghans whom Eurasianet met seemed uneasy approaching the authorities. Tajikistan is routinely ranked by governance watchdogs as one of the most corrupt countries in the world: 150 of 180 by Transparency International last year.

It is difficult, maybe impossible, to find an Afghan in Vahdat who wishes to stay.

But to be accepted in a third country – somewhere in the West – a refugee needs a sponsor.

One Afghan who has been in Vahdat for several years wonders if he would have found a sponsor had he stayed until the Taliban took control. By then he was already in Tajikistan. He feels like he missed his chance.

“As a refugee you start from scratch again. In Afghanistan I was well-known. Here I have to start over,” says the man, who asked not to be identified, fearing that any perceived complaint could hurt his status in Tajikistan.

For a time Khammosh ran a gallery in Vahdat.

“Through art we can teach the future generation that war is bad, they should pursue education and not pick up a gun. There are essential thoughts that I’m afraid the new generation will not understand under the new [Taliban] administration: that education is the way to develop your country and that there is no difference between man and woman.”

He has been forced to shut the gallery due to lack of funding. When he walks into the almost-empty building, two young girls flock over to him. They are former students asking when the gallery will open again, when classes will resume. On a phone they show off their recent drawings. “Well done, continue working on it!” he says, unable to answer their questions.

In the building next door, an Afghan woman, Rabia Payman, has opened a tailoring shop. “I was forced to set up this business to generate some kind of income, because there is no work here,” she says.

Several Afghan stallholders at the bazaar sell items from their homeland, such as saffron from Herat. One of the customers is 23-year-old Sabayi, who has been in Vahdat for three years.

“I had a hard time integrating, because there was nothing to do,” she says. But that changed after she formed a soccer team with other Afghan women. She plays defense and hopes to emigrate to Canada.

Khammosh realizes he may be in Vahdat for a long time.

“I had a dream life in Afghanistan. I had built it myself and was happy with it, but all of a sudden it was shattered,” he says. “Afghans are now just hanging in mid-air, not on earth, not in the sky. Just hoping and wishing. But it is hard to foresee a future. This is why I don’t know what to hope for.”

Thijs Broekkamp is a journalist and photographer from the Netherlands focusing on Central Asia.