In the new Armenia, media freedom is a mixed bag

Journalists credit the new authorities for not directly interfering in coverage, but are concerned about Pashinyan’s regular attacks on the press and the public backlash to criticism 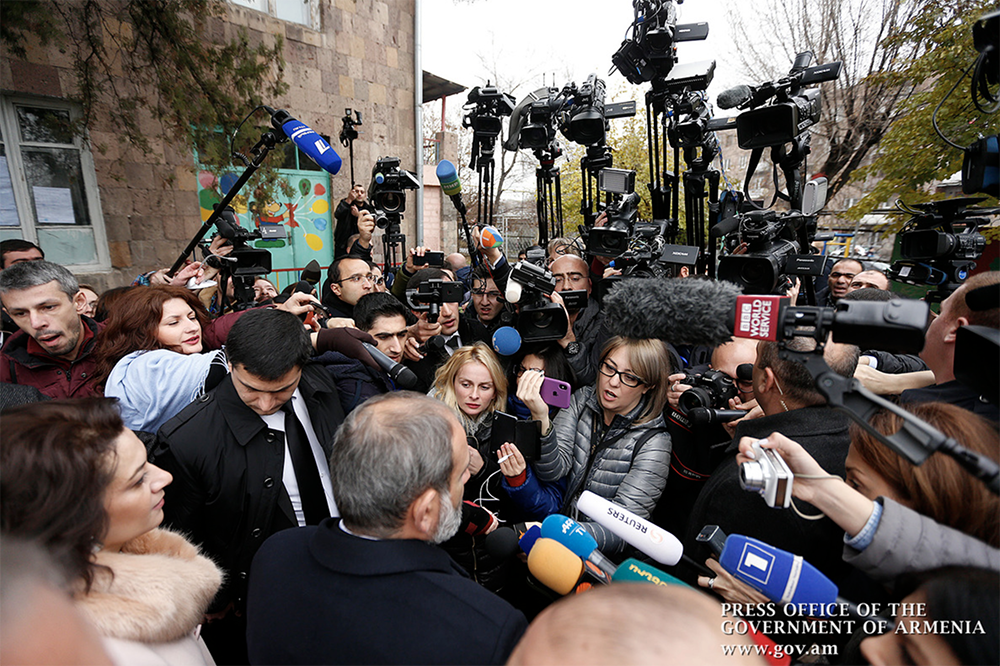 When former journalist Nikol Pashinyan ousted the authoritarian government and took power in Armenia last year, it seemed to promise a new era for the country’s media, which had long been seen as “not free” by international observers.

But nine months on, journalists say the picture is mixed. While the government no longer tries to directly orchestrate news coverage, the new authorities – bolstered by a supportive population – are proving thin-skinned to criticism. And Pashinyan himself, now prime minister, has repeatedly launched public attacks against journalists, which many in the media say has created a climate of intimidation against critical reporting.

“The media is freer now than it was under the former government,” said Gegham Vardanyan, the editor of media.am, a website that analyzes the news media. “Editors and journalists told me that in the past there were calls [from the government] to dictate the main topics of the news agenda,” he told Eurasianet. “Now it is easier, there are no longer calls like that.”

“Unlike the former authorities, the new ones don’t want to harm their positive public image, so they are more accountable to public pressure,” Ani Hovhannisyan, a reporter for investigative website Hetq, told Eurasianet. “Now the problem is that people simply adore the new prime minister and so every critical report about the new authorities subjects a journalist to public slander.”

Coverage of Pashinyan is for the most part positive, but media that report on missteps by the new authorities – including conflicts of interest or foreign policy troubles – are often subject to a backlash.

Pashinyan has often led the charge against critical reporting. On January 13, he posted on his Facebook page an article from the newspaper Hraparak which was critical of his government. “Judging from their reports, the media is nostalgic for the Republicans’ corrupt government,” he wrote, referring to the former ruling party. “After all, after many years of working side by side, they have become almost relatives.”

Two days later, during a Facebook live video, Pashinyan complained that the country’s media failed to appreciate the changes that had taken place in Armenia and blamed it on the fact that “90 percent of them” were controlled either by the former authorities or “those who oppose us.”

The Union of Journalists in Armenia issued a statement condemning Pashinyan for his attack on Hraparak. “This can lead to a dangerous attitude toward the media,” it said. At a press conference to discuss the report, Satik Seyranyan, the head of the union, addressed Pashinyan: “Now the Republicans are gone and the responsibility is yours. The media has become a scapegoat.”

Journalists also have been concerned at a handful of aggressive actions toward the media. In September, police raided a news organization, Yerevan Today, in the mistaken belief that it was behind the leak of sensitive recorded phone conversations among government officials. After two months, police returned the computers they had seized without explanation, Sevak Hakobyan, the website’s editor-in-chief, told Eurasianet.

In November, police paid a visit to another news website, Aysor, seeking the original video of an interview with a prominent businesswoman; it turned out that the video was in fact from a public press conference.

At the same time, Pashinyan’s wife, Anna Hakobyan, is the editor of a newspaper and a website, The Armenian Times, which many say has gotten a suspiciously large number of scoops since her husband took power.

Pashinyan “understands the power of the media, he feels like a journalist and this is why he gets into these conversations with the media,” said Boris Navasardyan, president of the Yerevan Press Club, at a roundtable discussion last month on the press in Armenia.

Overall, journalists credit the new authorities with being more accessible. But that, too, has been changing for the worse in recent months, they say.

“This government has been more accessible compared to the previous one,” said Arthur Khachatryan, a reporter for Armenian Public Television. “Pashinyan’s former spokesman [Arman Eghoyan] was always within reach, even if his answers were often very bland or if he couldn’t help the reporter at all,” he told Eurasianet. “It’s a paradox, but it’s the audience that has made journalists’ work difficult. Some of them wouldn’t and still won’t accept any criticism toward the current government.”

Another journalist, Taguhi Melkonyan of news.am, said that while government officials are becoming less accessible, the public seems to be accommodating itself to critical reporting.

“In the beginning, members of the new government would gladly answer journalists’ questions, but [now] most of them leave the building through the back door” after government sessions, Melkonyan said. “The most difficult ones to reach are the heads of law enforcement agencies, and it’s making them look like the former authorities.”

Melkonyan said that in recent months, however, the public seems to have become more accepting of critical journalism about the government. “We’ve received a lot of backlash in social media, where people interpret every criticism as ‘anti-revolutionary behavior,’” she told Eurasianet. “But it seems that trend is slowly dying.”

Agnessa Khamoyan, a journalist who used to work for Armenian Public Television, said that she used to have no problem interviewing Pashinyan and his allies when they were in the opposition. Now, though, she works for a new station, 5th Channel, that is frequently critical of the new government, and she said she has trouble getting officials on the air. “Most of them prefer to go to media where they feel comfortable,” she said. “Personally, I understand them, but this can’t last long.”

“Previously if you criticized government you would be called a professional, and now when you do the same, it turns out that you are illiterate and vengeful,” Khamoyan said wryly.