In the shadow of war: Life in Armenia’s defensive corridor

Syunik is Armenia’s first line of defense should all-out war ever resume. 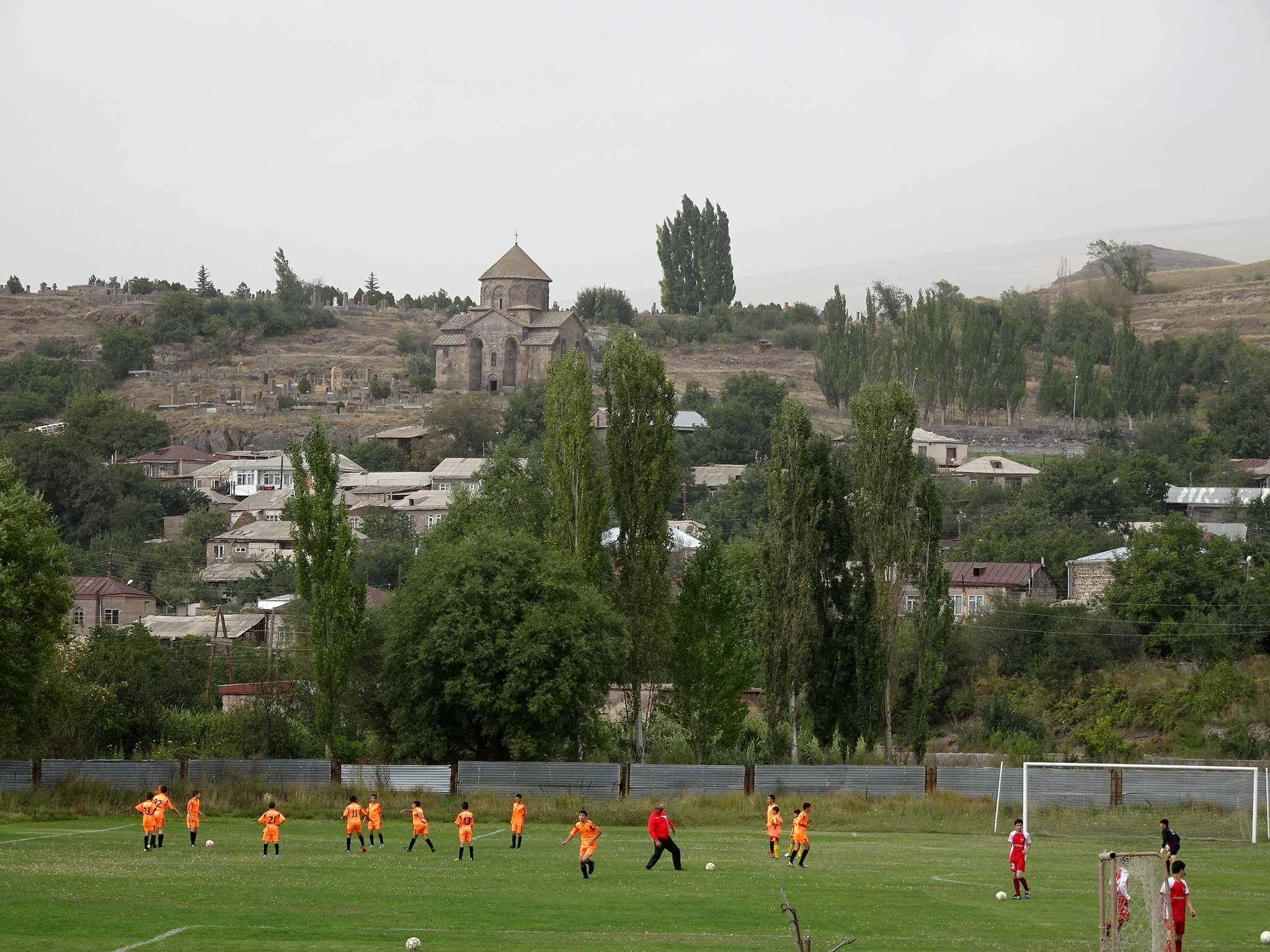 On April 4, 2016, Gevorg Azoyan was in the mountains of Karabakh riding in a troop transport to the frontline when an Israeli-made “kamikaze drone” slammed into his bus, killing nine and leaving several others, including Azoyan, in critical condition.

Azoyan now wears protective bandaging to cover the burns across his body. Despite his injury he remains in good humor. “Where the f--- are you?” he asks a fellow veteran who called during an interview with visiting journalists. “I’m with two foreigners, they’re going to help find you a French wife.”

But Azoyan's upbeat nature cannot erase the brutality of his wartime experience.

“That was my friend,” he says, showing a gruesome image of the aftermath of the drone strike. “He was blown to shreds. It was one of the most horrible days of my life.”

“We are always ready,” he says. “Our first thought is always the protection of our children.”

In April 2016, fighting flared between Armenia and Azerbaijan over the disputed territory of Nagorno-Karabakh. Azoyan was among veterans of the first Karabakh war who volunteered during the outbreak of violence to support the region’s young conscripts.

“We went to the frontline to help the army,” says Ashot Avakyan, another veteran of the first Karabakh War, in a rustic bar in the center of Sisian. “While the professional soldiers slept, we watched the frontlines. Some of us were old and couldn’t do much – I can’t even run 200 meters these days. But we were there to boost morale.”

The “Four-Day War,” as it’s become known, was the fiercest round of fighting between the two sides since a 1994 ceasefire ended six years of conflict.

Wedged between Azerbaijan proper and its exclave of Nakhchivan, Syunik is Armenia’s first line of defense should all-out war ever resume.

From backwater to bridgehead

One of the largest per capita contributors of soldiers to the war effort is Sisian, Syunik’s northern stronghold. Today, a monument to the first Karabakh war towers over the town – a stark reminder of its fraught decades of independence.

Known as the “southern gateway to Armenia,” Syunik has for centuries served as a strategic outpost. That it is even part of Armenia is thanks in large part to Garegin Nzhdeh, who fought with Turkish forces during the period of Armenia's first independent republic, from 1918 to 1920, and then led resistance to the Bolshevik takeover. He managed to hold off Moscow's forces for a few months in central Armenia, then retreated south and established the Republic of Mountainous Armenia, centered in Syunik.

Nzhdeh eventually agreed to surrender the region to the Bolsheviks on the condition that it become part of Armenia, and not Soviet Azerbaijan as the Bolsheviks had planned. His efforts ensured that Armenia today retains its lifeline to Iran, a neighbor whose support has been crucial because Armenia's borders with Azerbaijan and Turkey are closed.

Sisian itself suffered greatly during the first decade of independence.

Prosperous to a degree rare for the provinces, Sisian was a model Soviet town. Its public parks and ornate government buildings attest to former splendor.

“We had a textile factory that employed thousands of people,” says Hasmik Asatrian-Azoyan, a community activist and local entrepreneur. “You can see [what’s left of it] on the edge of town.”

Asatrian-Azoyan's family, like most others in Sisian, was hit hard by the Soviet Union’s collapse. Local industries, dependent on materials from Central Asia and markets elsewhere in the Union, were quickly shuttered following independence. Her father, an employee at the nearby hydroelectric plant, also lost his job.

Unlike many others, however, he managed to transition to the demands of the new economy. “At the age of 50 he taught himself economics and became a bank manager,” Asatrian-Azoyan says with pride.

Her mother, a teacher, also changed professions, working in the regional government of the newly independent state. But the cost of educating their four children was a difficult burden.

“They had to get up at 5 a.m. to work on the farm before they went to work. I could see them physically aging before my eyes,” she says.

For all this, conflict enveloped her family. Asatrian-Azoyan's father-in-law, Basentsi Azoyan, founded the Sisian battalion of volunteers when the first armed clashes began in Karabakh in 1988. The town’s museum features him prominently, crediting him with saving the region.

“My husband was among the volunteers who arrived after the first group were injured by the drone,” she says. “It really changes you as a family, sitting in terror, hoping and praying that you will all be together again.”

For a defensive frontier, the imperative to train the next generation is strong.

Arsen Avakyan, Ashot’s brother, is himself an experienced fighter. In 2010, he founded a youth corps for the town’s adolescents.

“It gives the children a sense of purpose and keeps them busy...there isn’t exactly much to do around here,” he says with a grin. “These children come from different villages all-around Sisian to take part in physical training and learn about teamwork.”

The corps’ popularity is obvious. Walking around town, children in military uniforms – mandated by the club – are a common sight.

Parents, too, see its appeal. “They encourage their children to attend,” says Arsen, though he’s quick to insist that most of the children “are happy to be involved.”

Asatrian-Azoyan is of a different opinion.

“The [children] don’t want to be soldiers, they go because the military is mandatory,” she says. “Many from Sisian go to Yerevan to study, but when they come back they find there’s no economy they can apply their education to.”

In a country with both mandatory military service and few job prospects outside the capital, the corps also provides a way forward. Many of those involved go on to join the army as professional soldiers.

But some worry about the militarization of Armenian society. Last year, Armenian authorities passed a controversial new law that makes avoiding the military even more difficult. The law requires students to sign an agreement with the Defense Ministry promising to join the army upon finishing their studies. After graduating, they will be required to serve for three years.

The bill came as part of a broader program, known as the Army Nation Concept, to further integrate the Armenian military into society. The laws provoked student protests across the capital. But Arsen Avakyan sees no issue with the concept.

“It’s natural for our children to receive such training,” he says. “It has been this way since the Armenian genocide and our people have to be ready at all costs. Every nation has to protect itself.”

The genocide, carried out by the Ottoman Empire in 1915 against its Armenian minority, still resonates. In 2014, a march in Sisian commemorating the massacres saw toddlers burning a Turkish flag.

For Ashot Avakyan, the latest round of war with Azerbaijan is part of Armenia’s long struggle for survival. “Read the history of Iran, of Byzantium, of Rome,” he says. “We’ve always had to defend ourselves, and you’ll see many references to how well we’ve done so.”

The proximity of the borders reinforces the relevance of such a choice. An average day in Sisian sees a regular procession of military vehicles, either heading out toward the Nakhchivan border or further afield: east, toward Karabakh.

As the conflict and trade embargo from Turkey and Azerbaijan continues, Armenians are losing touch with their previous years of living side-by-side with their Muslim neighbors.

“Friendship was imposed from above [by the Soviets],” Avakyan says. “In our souls, we were against each other, because the history of our conflicts cannot be forgotten.”

Azeris once populated the villages in Sisian’s countryside; Azerbaijan’s first president, Heydar Aliyev, reportedly even hails from one such hamlet. But this population is gone, having fled during the first years of the Karabakh conflict.

For Ashot Avakyan, the answer of whether life was better with the Azeris is an easy one. He is a member of the Dashnaktsutyun, the ultranationalist party that envisions a “Greater Armenia” whose borders encompass large portions of eastern Turkey, Georgia, and Azerbaijan.

Regardless of the pride Sisian’s residents feel toward their military history, the town has suffered greatly because of it.

One of the most pressing issues is that of healthcare for veterans. “The state has no resources,” Avakyan says. “So care for veterans is insufficient. They [the state] understand that I went [to Karabakh], that I could have given my life, but they did nothing for me.”

“I receive a 50 percent discount for any services I need as well as access to sanatoriums,” he says. “I never ask for more and I still have my state pension.”

But his need for care is serious. The drone attack in 2016 left him with burns across 40 percent of his body, as well as shrapnel wounds in his back and stomach. He spent 12 days in intensive care as doctors in Yerevan fought to save him.

Benefits, set by the ministries of defense and social welfare, are modest. Pensions range between 30,000 and 80,000 drams (around $73-$193) per month, an amount insufficient to cover a disabled veteran’s medical needs.

But Azoyan insists walking is the best medicine.

“I walk around the town every day, all of us do. We all see one another [Karabakh veterans] during our daily exercise routine.”

“The state may be stingy, but I’m an optimist,” he says. “When the motherland is in danger we have to defend it. No matter what.”

With a state budget of just over $2.5 billion, the lowest in the south Caucasus, and a long-standing lack of jobs, Armenia claims that it cannot afford to grant veterans more.

Despite the poor conditions, however, Sisian’s residents still gravitate toward the military. “My son dreams of becoming a general like his grandfather,” Asatrian-Azoyan says. “I guess it runs in the family.

Bradley Jardine is a freelance journalist who covers the Caucasus. Neil Hauer is an independent security analyst focused on Syria, Russia, and the Caucasus.