In times of trouble, the Georgian government turns to Mother Mary

With a new state religious holiday, the ruling party is following a well-established pattern in Georgian politics by kowtowing to the church. 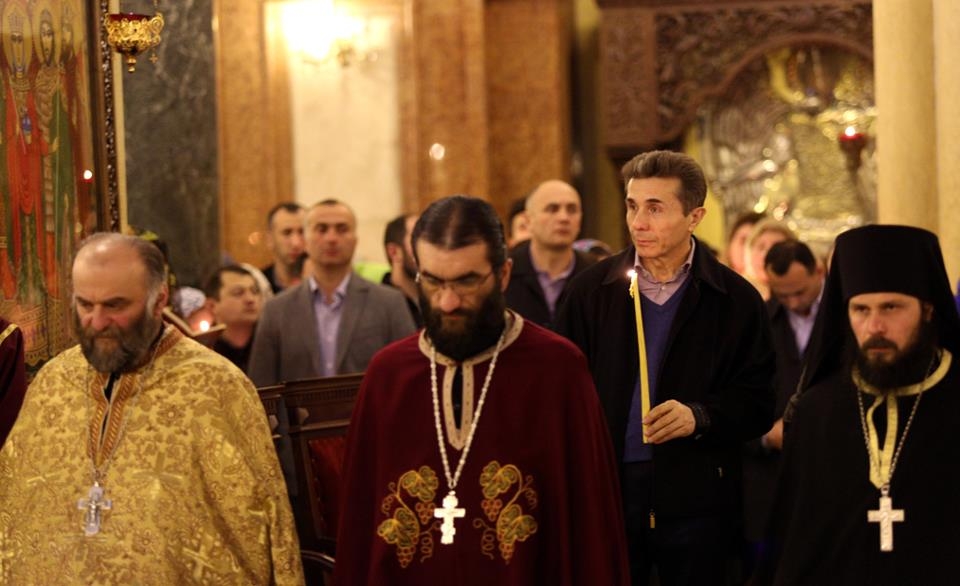 Legend has it that after Jesus ascended to heaven, the Virgin Mary and the disciples drew lots in Jerusalem to pick the lands where they would spread the word of Christ. Mary drew Georgia. And although she never visited the country, the connection has become deeply woven into Georgia’s national narrative.

Poets, writers and singers across the centuries have beseeched Mother Mary to “spread the hem of her dress,” as a widely used phrase puts it, over Georgia to protect her lot. The trope is used heavily today both in church sermons and toasts at the dinner table. Some, especially younger people, even ironically use “the Lot” (წილხვედრი, Tsilkhvedri) as a nickname for Georgia, as in, “I’m back in the Lot next week.”

Now the special relationship between Mary and Georgia has been inscribed into law, as the government this month established a state holiday marking the Virgin’s selection of Georgia. The bill, floated by the church and made law by parliament on May 8, is seen in many quarters as yet more pandering to the devout – further blurring the line between church and state.

“It is important that we officially make Georgia a country allotted to Mother Mary,” said Sopo Kiladze, a member of the ruling Georgian Dream and the chair of the parliament’s Human Rights Committee, as she announced the amendment to the nation’s labor code.

By way of justification, the bill cites a medieval text – a first in Georgian legislative history. “The Lord appeared to the […] heavenly queen and commanded that she stay in Jerusalem, but send Andrew the First-Called in her stead with his icon not wrought by hand,” reads the explanatory note, quoting The Georgian Chronicles, a compendium of medieval annals. Apostle Andrew the First-Called, who is believed to have travelled to the Holy Virgin’s lot on her behalf, is regarded as the founder of Georgia’s ancient Orthodox Church.

The idea to celebrate The Day of Allotment to Mother Mary – a phrase agglutinated into a single word in Georgian – წილხვდომილობა, Tsilkhvdomiloba – belongs to the “Georgian Orthodox Church and we fully support it,” said Prime Minister Mamuka Bakhtadze last month.

The government also allotted upwards of $300,000 on celebrations to be repeated annually on May 12; for this year’s inaugural celebrations the Ministry of Education, Science, Sports and Culture ordered that 200,000 icons and 200,000 leaflets be produced.

Despite widespread reverence for the Church, enshrining the legend in law has given many believers pause. Public figures and members of the political opposition excoriated the parliament for directing scarce taxpayer funds toward the creation of the holiday. Popular novelist Lasha Bugadze called the bill populism at its worst. “Amid all the current problems, the parliament found the time, money and energy to […] make all of this a law,” Bugadze told RFE/RL’s Georgian service. “Mother Mary would not be happy being institutionalized like this,” he added.

The chairman of the ruling Georgian Dream party, who is the nation’s richest and most powerful man, is also sparing some of his personal wealth to help believers exercise their devotion to the Holy Virgin. In April, Bidzina Ivanishvili visited the Western town of Zugdidi and vowed to contribute more than one million lari (about $360,000) to help complete construction of the Cathedral of Mother of God of Iveria there. Earlier in the month, Ivanishvili met with the leader of the Georgian church, Patriarch Ilia II, and promised to pay for the frescoes in the new Holy Trinity Cathedral in Tbilisi.

The Georgian Young Lawyers Association, a rule-of-law watchdog, criticized these promises as vote-buying ahead of local elections this month. Sandra Roelofs, the wife of Ivanishvili nemesis and ex-president Mikheil Saakashvili, ran for Zugdidi mayor in that election and lost to a Georgian Dream candidate.

The church gambit is almost as old as independent Georgia. Georgian leaders regularly kneel, pray and shower the Georgian church with privileges in order to curry favor with the ecclesiastic hierarchs and their parishes. When Zviad Gamsakhurdia, the first president of post-Soviet Georgia, was ousted in a coup, his successor, former Soviet Foreign Minister Eduard Shevardnadze, tried to legitimize his rule by getting baptized as a born-again Christian and bestowing constitutional privileges upon the church. Following a revolt against Shevardnadze, the next president, Saakashvili, pledged his allegiance in a historic church, on the grave of a venerated medieval king and saint, David the Builder.

Then, in 2012, it was Ivanishvili’s turn to push Saakashvili out of power. At first, Ivanishvili sounded sober about the church, saying it should be open to public criticism and separate from the state. He even once dropped a snarky comment toward the deeply venerated Patriarch Ilia II, joking about whether the patriarch liked him or Saakashvili more. But as the years passed and his party’s approval ratings declined, Ivanishvili increasingly began appearing in church, candle in hand.

“When a [Georgian] political force is losing popularity, it tries to borrow popularity from the church,” Kornely Kakachia, director of the Georgian Institute of Politics, a think tank, told Eurasianet.

The nation’s secularists and atheists say that almost three decades of this quid pro quo have turned Georgia into an unholy mix of liberal democracy, oligarchy and theocracy. Today clerics often weigh in on matters of public policy. In an apparent nod to the highly conservative church’s wishes, for example, the authorities have made sex education optional in schools and constitutionally defined marriage as a union between a man and a woman.

“Politicians become hostage to their own policies and they keep making concessions to the church to keep the church happy,” theologian Beka Mindiashvili told Eurasianet.

Last year, the ruling party struggled to secure – even with cash handouts – the victory of its preferred presidential candidate Salome Zourabichvili. And next year Georgian Dream will face another difficult test: parliamentary elections. “Nobody knows what sort of losses he [Ivanishvili] and his party will incur by 2020, so he is taking precautions,” Kakachia said.

With that pivotal vote approaching, Georgians are bracing for more Hail Marys.