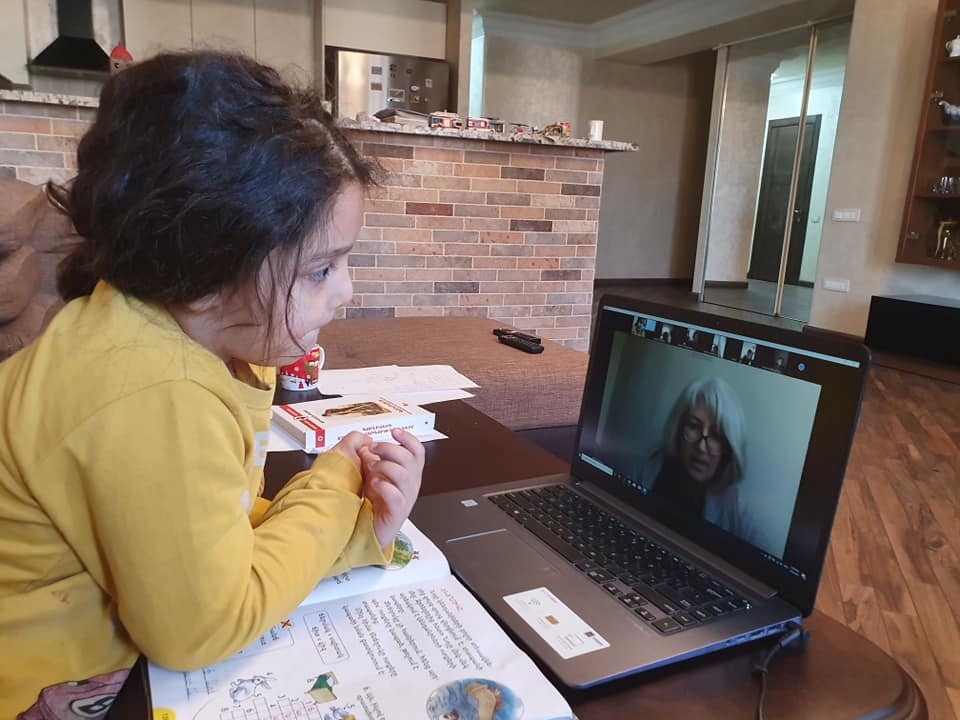 Liana Karapetyan complains that she can’t even tiptoe around her three-room apartment without exasperating her family. Her husband is working from home during the lockdown, her three children studying. Everyone is glued to a laptop.

Karapetyan’s eldest daughter, 13, “spends all her time in front of the computer and by evenings has migraines and a temperature. I don’t approve of my kids being so dependent on gadgets during normal life,” she said. The Education Ministry “should really think about cutting down the coursework.”

Around the world today, some 90 percent of children – over 1.5 billion kids – are home from school as their governments try to stem the spread of the novel coronavirus, a UN agency says. Many of the 192 countries that have closed schools are seeing one thing come starkly into view: socioeconomic class divides.

Though she calls her situation a “madhouse,” Karapetyan counts herself lucky. Her kids have the equipment they need; her husband has a job he can do from home. Space is tight but could be worse. “Think about those who live in a one-room apartment with seven kids,” she said.

Two hours to the north, in Lori region, Koryun Melkumyan shares one room in an unfinished house with his wife, his mother and his seven children – the youngest a one-month-old baby girl. Like most residents of his village, Melkumyan lacks a regular job. His few animals produce yogurt and milk to sell at the local bazaar, and he receives about $150 per month in government assistance.

His children are also out of school. “They miss their classes. We don’t have smartphones or computers or the internet to be able to continue their education,” Melkumyan told Eurasianet. “Sometimes they do lessons using the [landline] phone.”

The school principal has promised to provide a computer and Melkumyan has inquired about installing an internet connection, though the provider told him it could not dispatch a crew until the lockdown ends.

According to the Education Ministry, about 80 percent of Armenia’s school-age children are engaged in distance learning during the nationwide state of emergency, which started on March 16 and includes shelter-in-place orders and travel restrictions. As of April 15, the country of 3 million had registered 1,111 COVID-19 cases and 17 deaths.

In a written response to Eurasianet’s queries, a representative said the ministry was “encouraging teachers not to overload students with assignments that involve the use of computers.” Which tools teachers use are up to them.

“Armenia has organized very quickly,” said Harutyun Tsatryan, founder of the Information and Education Development Network, a non-profit that develops higher-education teaching methodologies. “For example they [the ministry] decided to do lectures on Public TV and the quality is very impressive. They get good people to do them.” (The programming has aired since March 19.)

But Armenian teachers, like their colleagues around the world, are struggling, too, in this unprecedented situation.

In the northern Tavush region, a teacher in her 60s describes her crash course in teaching over the messaging app Viber (an analogue to WhatsApp or Facetime). “I only had Viber on my phone to talk to my grandchildren in Russia. All of a sudden we all have to teach with computers. I don’t even have one,” said the teacher, who requested anonymity, fearful she could lose her job for complaining publicly. “Some of my students are from very poor families and haven’t even seen a smartphone; of course they are missing classes.”

In a nearby town, mother of two Anna Manucharyan says that her school district is carrying on the regular school schedule, but remotely. “My 7th grader starts at 9 a.m. They do all their classes on Zoom [an online conferencing program] and some on Viber,” Manucharyan told Eurasianet. “In his class there is only one boy who doesn’t have the tech, so he goes to his uncle’s house and does it from there. My other son is in college. His classes also take place mostly on Viber … and last even longer than they are supposed to.”

Education Minister Arayik Harutyunyan says the current situation should be seen as a pilot, and that his ministry will study the results. “Some schools and teachers have already been doing distance learning. At the moment we can’t say we are providing all the [equipment], but this will become a national pilot program for distance learning,” he said on March 18.

While most people acknowledge problems with the current system, thrust so suddenly on teachers and students, Tsatryan of the student-exchange network sees the groundwork being laid for a post-coronavirus revolution in higher education.

“If the ministry follows up by preparing enough lecturers to teach classes online, that will change the whole idea about higher education in Armenia. Distance learning is cheaper and more accessible,” Tsatryan said. The cost of a university education “isn’t just the tuition, but also the living expenses. For families in the regions that can be unaffordable.”