In Uzbekistan’s corner, muscle and pride

Introduced after World War I by an American stuck in the Soviet Union, boxing has never been the source of so much national pride. 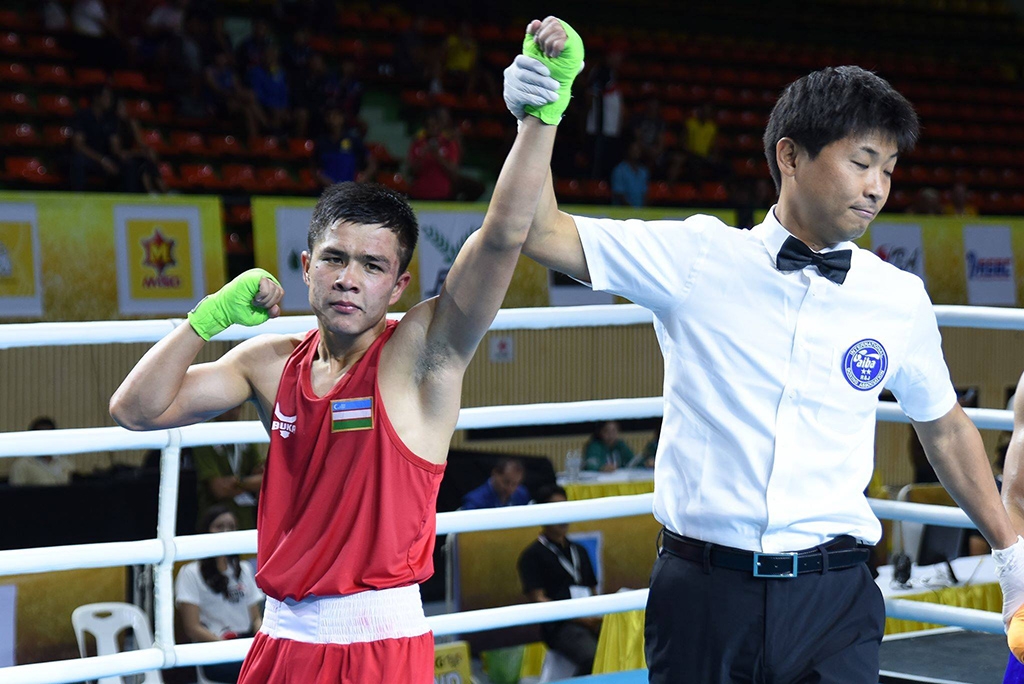 In their black suits and thin black ties, John Travolta and Samuel L. Jackson are instantly recognizable as the stars of Pulp Fiction. Yet here, at the entrance to the Buka Gym in Tashkent, their outstretched arms proffer not pistols, but jump ropes: a boxer’s basic tool.

Today boxing is one of Uzbekistan’s most popular sports. Originally brought to the country after World War I by an American stuck in the Soviet Union, it has never before been the source of so much pride in the Central Asian nation. And for the country’s top contenders, Buka is the place to be.

Resting in a corner after his training is Fazliddin Gaibnazarov, the 28-year-old light welterweight who won gold at the 2016 Olympics in Rio de Janeiro. Now working the professional circuit in California, he was home recently preparing for a tournament in neighboring Kazakhstan.

“Uzbeks have fighting in their blood. In the end, we are the descendants of Amir Timur [the 14th century conqueror known in the West as Tamerlane]. And we have a strong history of boxing in Uzbekistan,” Gaibnazarov told Eurasianet shortly before Tashkent went into lockdown to fight coronavirus. “Boxing can teach you a lot in life, especially when you’re a man. It teaches you how to act towards people, to make friends.”

Four years previously, in London, the team took 16th place, with only one bronze medal. The victory in Rio, therefore, might seem a fluke. But, as Murodjon Mamadaliev, general secretary of the Uzbek Boxing Federation, explains, the successes are built on reforms after London, when most of the federation’s staff were replaced.

“Six months before the 2016 Olympic games in Rio we sent our boxers to Cuba. They had to feel the Cuban experience in the ring. Sometimes, boxers are intimidated by their opponents, especially the Cubans. They had to break this psychological barrier. They were there for two weeks and they finally believed that they could start winning,” Mamadaliev told Eurasianet.

But becoming a champion is the easy part, Mamadaliev says; holding the title is the challenge. The federation has received increasing state support since Shavkat Mirziyoyev became president in 2016. Private donors like the founder of the Buka Gym, whose Buka line of clothing is worn by the national boxing team, are also stepping up.

It might surprise fans today, but these successes are part of a tradition dating back 100 years to a New Yorker with a sore thumb.

Sidney Jackson was born to a poor Jewish family in the Bronx in 1886. A professional boxer by the age of 18, he was traveling in the UK with the U.S. boxing team in 1914 when he broke his thumb in Glasgow. Unable to fight, he decided to travel Europe. Drawn "by the ad man's promise of Polar bears roaming Russian streets,” he set off for Arkhangelsk, wrote Jim Riordan in the Journal of Sport History in 1993.

Unimpressed with Arkhangelsk, and having seen no bears, he moved on to Moscow where he learned that war had begun. The U.S. consulate advised that the only way to return to the States was across Afghanistan and the Arabian Sea, but by the time Jackson got to Tashkent he had run out of money.

He worked as a tailor to make ends meet, falling in with a small group of exiled Europeans. When the civil war reached Central Asia, he fought against the Whites on the Caspian Front and helped interrogate British POWs. In early 1921, Jackson returned to Tashkent and began organizing sports classes for kids, including boxing. He traveled around the city on his bicycle looking for recruits, his daughter told Eurasianet. At first, Uzbeks were not keen on this American with his unknown exercises. The idea of boys fighting with their fists did not instantly appeal.

But he managed to gain trust and founded the first boxing club in the new Soviet Union. “There was no equipment. The students sewed their gloves themselves. They would find sticks, place them in four corners, tie them with ship ropes and make a ring,” explained Jackson’s daughter, Paina Jackson-Katz, now 86 and living in Tashkent.

Jackson lived the rest of his life in Uzbekistan, turning down a chance to return to the States. Before his death in 1966, he trained a number of boxing champions, including 1976 Olympic silver medalist Rufat Riskiyev. Other "Jacksonovtsy" became successful doctors, writers and engineers.

“Jackson showed that fighting is an art, that there are rules, that you can do it in a humane way. Our trainers always tell the boxers: box, don’t fight. Boxing is an art. It’s not the arms but the mind that is working,” said Mamadaliev, the Boxing Federation chief.

Of boxing, Jackson once told his daughter that “in war you have two generals in a confined space. When the space is large, it is easy to work out tactics. But in a small space, it’s harder. So first of all the boxer has to use his head,” recalled Jackson-Katz, who grew up next to the ring.

Asked why boxing is enjoying such renewed interest in Uzbekistan, Jackson-Katz has no doubt that it is her father’s legacy bearing fruit.

“Why does a beautiful tree grow? Because it has strong roots,” she said.