In Wake Of Boston, Congress Calls For Greater Security Ties With Post-Soviet States 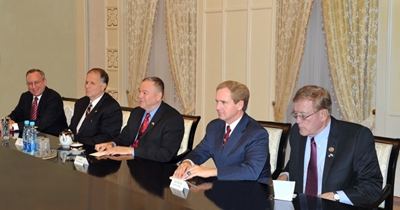 The bombing of the Boston marathon has appeared to whet the appetites of some members of Congress to increase cooperation with post-Soviet governments in taking a strong hand against the threat of Islamist radicals.The House Committee on Foreign Affairs held a hearing on Friday, "Islamist Extremism in Chechnya: A Threat to the U.S. Homeland?" And it provided the opportunity for several members of Congress to tout not just greater security cooperation with Russia vis-a-vis Chechnya, but across the post-Soviet space.

In his opening statement, Dana Rohrabacher, a California Republican and chair of the subcommittee on Europe, Eurasia and Emerging Threats, promoted the idea of closer security ties to Russia and Central Asia:

What outside forces have sought to transform the North Caucasus and Central Asia into a region of Muslin extremism which did not exist before?

Greater cooperation with Russia and the governments Central Asia should be explored in order to properly respond to this emerging threat. This part of the world is critical to the future of the human race. If it becomes dominated by a radical version of Islam, it will change the course of history in an extremely negative way.

Later in the hearing, Rohrabacher returned to a theme he is fond of, the notion that the Uzbekistan government's violations of human rights are necessary to maintain security there:

"Let me note that in Uzbekistan, they didn't allow the Saudis to come in and build their mosques. They were criticized here as that's a violation of their human rights. But we know that the Saudi purpose of doing this was to develop a brand of Islam that will target and kill children! So ... is Uzbekistan wrong and are we right in condemning them in not allowing them to build their mosques?"

Ed Royce, chairman of the committee, added a Kyrgyzstan angle:

"I talked to a village leader who was Kyrgyz, and he told me about the situation in his village where 12 young men were receiving instruction in jihad. They had agreed to go to a madrassa to get an education but all 12 were decapitated. And he said 'This is not a local Kyrgyz custom in Kyrgyzstan. This is the importation or the change of a culture and gradually we're changing our culture to this al Qaeda psychology.' It's a 'Gulf state culture' in his mind, that's what he said. It's a Gulf state culture in terms of decapitation."

He did not elaborate on the circumstances surrounding these alleged decapitations.

Bill Keating, a representative from Massachusetts and the top Democrat on the Europe, Eurasia and Emerging Threats committee, also supported the idea of additional cooperation with Russia:

"What began as an ethnic struggle in a faraway land decades ago had fueled an insurgency that presents a threat to our homeland.... There is undoubtedly a delicate balance between cooperation with Russia on counterterrorism and concern over Russia’s human rights abuses, but in no way should this hinder working together to protect the lives of innocent people. At the end of the day, that's all we want."

No representatives from the White House, State Department or Pentagon testified at the hearing. (In fact, Rohrabacher and Royce both noted that the Russian embassy in Washington was more cooperative than was the State Department in finding witnesses for the event.) So it's not clear to what extent views like this are shared by other branches of government. But members of Congress can easily add funding to security cooperation programs, so look for some activity to come on this front.