Supporters of a new bill say the country needs to strengthen civilian defense. But skeptics say it could lead to increased gun crimes. 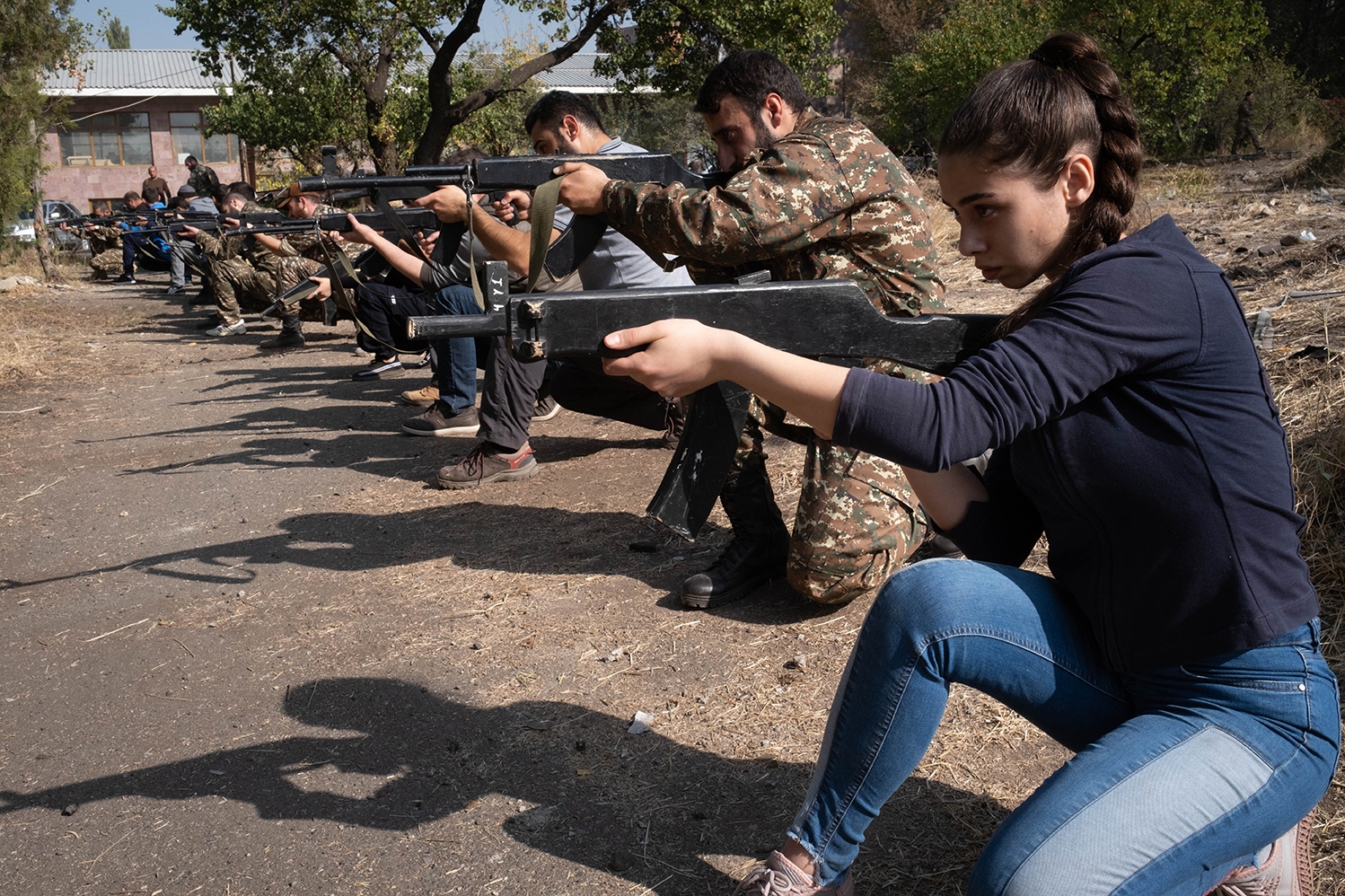 Armenians train to use rifles during the war with Azerbaijan in 2020. (photo: Winslow Martin)

Armenia’s ruling party is seeking to significantly loosen the rules for civilians to obtain guns, proposing new legislation that they say will help the country better defend itself in the wake of the 2020 military defeat to Azerbaijan. But opponents of the bill worry that it could lead to an increase in gun-related crime in the country.

The bill, introduced by members of Prime Minister Nikol Pashinyan’s ruling Civil Contract party on April 18, would reduce the requirements for first-time buyers of rifles, eliminate limits on purchases of ammunition, and extend the term of validity for weapons licenses. It also adds some new regulations, forcing new licensees to pass an exam and raising the age for legal gun ownership from 18 to 21.

“This is very important in terms of increasing our defense capability as a nation and state, given the threats to our security,” Vigel Gabrielyan, a Civil Contract member of parliament and sponsor of the bill, told Eurasianet. “We need to give people who want it the opportunity to master the skills of handling weapons, especially since the demand for this in Armenian society is only growing after the 2020 war.”

Armenia’s military defeat in 2020, and the loss of much of the territory in and around Nagorno-Karabakh that it had controlled since the 1990s, has heightened Armenians’ fear for their security. Azerbaijani military positions have been set up closer to Armenian territory than they have been before, there have been several cross-border incursions, and Azerbaijan’s leadership continues to use threatening rhetoric against Armenians.

Abet Madoyan, who teaches data science at the American University of Armenia in Yerevan, bought his first gun, a Russian-made Vepr VPO-213 shotgun, after the 2020 war. He now is working to improve his skills, going to a shooting range periodically. “I want to be combat-ready,” he said.

“Given the threat to the security of Armenia, the population must arm itself very quickly and master the skills of civil defense,” he told Eurasianet. “The state isn’t doing enough to improve the defense capability of the country and society as a whole. We tasted the fruits of this policy in the 2020 war, our society was completely unprepared for this.”

Under current law, an Armenian can only acquire a license for a rifle after he or she has been licensed for five years to own a smoothbore weapon like a shotgun. The new legislation would require new licensees to pass a test (including both written and shooting elements) but then would allow ownership of a rifle immediately, without the five-year wait. The law also would allow citizens to own up to 10 firearms, an increase from the current five.

Artsrun Hovhannisyan, a former Defense Ministry spokesperson who is now a staff expert at the parliament’s committee on defense and security, said the liberalization of the laws is overdue.

“This is a very important bill from the point of view of increasing our combat capability,” he told Eurasianet. “Only the fact that an Armenian citizen from the age of 21 can buy rifled weapons, take part in some kind of tactical exercises, similar to those that are held in the army, would already be a big plus.”

The legislation has gotten the support of weapons dealers, as well. “We hope that sales will grow after the removal of the five-year barrier to the acquisition of rifled weapons, as demand is now growing,” said Samvel Margaryan, director of Aspar Arms, the largest gun dealer in Armenia. “Many people want to buy a rifle right away without having to own a hunting rifle for five years,” Margaryan told Eurasianet.

But the law has alarmed some, including peace activists, who worry that it will increase gun-related crime in the country.

There is a strong “criminal subculture” in Armenia that could exacerbate problems of gun trafficking if weapons become easier to acquire, said Edgar Khachatryan, head of the NGO Peace Dialogue. “If we haven't defeated this criminal subculture, then there is a danger in civilian life: easier access to weapons will lead to an increase in crimes,” Khachatryan told Eurasianet.

But Gabrielyan, the bill’s sponsor, said those worries are unfounded.

“If we make weapons available to ordinary citizens, a potential criminal will think twice before attacking someone, since an armed person can effectively defend himself,” he said.

While that logic has been refuted in the United States, where studies have shown that higher levels of gun ownership lead to greater gun violence, Gabrielyan said that he expects the results to be different in Armenia.

While the new legislation does not have any provisions about reducing illegal weapons trafficking, the drafters are working on it, Gabrielyan said. They have consulted with police and will monitor the situation following the adoption of the bill, and could either amend the law or introduce separate regulations, he said.

The new law also legalizes the use of a gun if one is attacked at home. Some doubt the ability of Armenia’s justice system to fairly adjudicate those sorts of cases, however.

“Where and when can weapons be used, in which cases will it be considered self-defense, and in which not?” asked human rights advocate Nina Karapetyants in an interview with Eurasianet. “This is a very complex mechanism, and knowing the flaws in our law enforcement system and courts, I very much doubt these mechanisms will work. I'm afraid one person might be put behind bars for using weapons and another person, who may be a friend [of law enforcement officials], will be released.”

Gabrielyan acknowledged that the new legislation may need refinement on these issues. “We agree that the legislative regulation in the case of self-defense is not clear, they need to be further developed,” he said.

Another key provision of the bill: It would “provide residents of particular settlements with combat weapons,” and that the government would determine the specific list of settlements. That would seem to apply to areas along the border with Azerbaijan, where the security concerns are felt most intently.

In April, the government rejected a bill from the opposition that would have issued weapons to residents of border areas, arguing that it was not necessary given the existence of their bill. “The draft law we proposed deals with not only border settlements, but the whole spectrum,” Gabrielyan said.

Given its backing from the ruling party, which holds a large majority in parliament and which does little without the government’s initiative, this bill has a much greater chance of passing. The law, formally called “On the regulation of the circulation of weapons,” will have to be debated in the parliament’s committee on defense and national security, and also receive approval from the government. It would go into effect three months after passage.