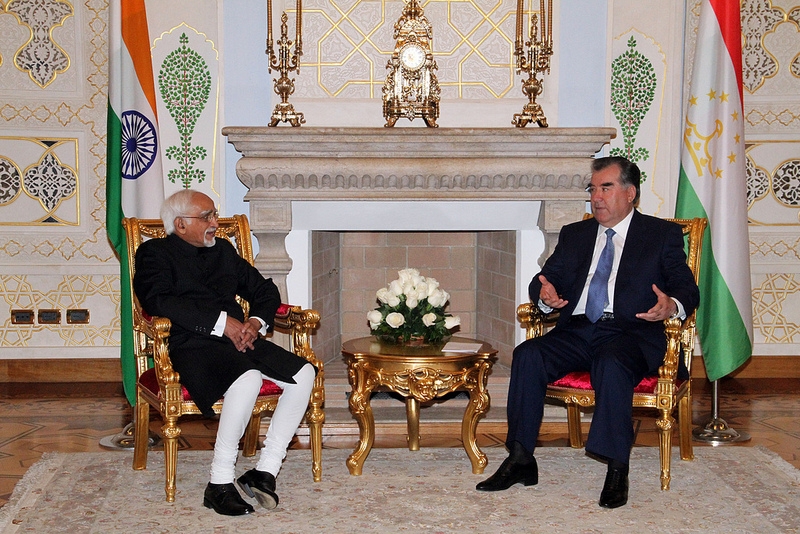 India has set up a military hospital in southern Tajikistan in an attempt to "further strengthen India's geo-strategic footprint in the crucial Central Asian region," an Indian newspaper has reported. India's vice president visited Dushanbe earlier this week, and the Times of India reported that there are 100 Indian personnel at the air base at Ayni and that "India has quietly airlifted a military hospital, with doctors, paramedics and equipment" to Tajikistan:

India already has over 100 Indian military personnel stationed at the Ayni airbase in Tajikistan, a country that also shares close proximity to Pakistan-occupied-Kashmir (PoK), as a kind of a "military outpost". The new hospital will serve to further strengthen India's geo-strategic footprint in the crucial Central Asian region.

"The 50-bed hospital will treat both military as well as civilian people," said a source. The setting up of the hospital comes at a time when vice-president Hamid Ansari is on a visit to the landlocked country to further cement the bilateral strategic partnership and well as expand its "Connect Central Asia Policy" to build stronger linkages with the five Central Asian countries.

An Indian military hospital in Tajikistan was proposed in 2011, so this would seem to be the realization of that plan. But the claim about 100 Indian personnel should be looked at skeptically. It seems to happen every time a high-ranking Indian political figure goes to Tajikistan: the Indian press reports, probably falsely, that India is using Ayni. India did spend a lot of money renovating the base, only to be pushed aside by Russia, who seem to have told Tajikistan that they won't stand for any other country operating the base.

But that claim, as well as the somewhat overheated claim about a small hospital acting as a geopolitical foothold, serves a purpose. As a Wikileaked cable from 2007 put it:

While the [Indian Ministry of External Affairs] steadfastly denies that India is planning to establish a military base in Central Asia, the recurrent rumors serve to make Pakistan and China nervous. The possibility that these stories are leaked from the [government of India] itself and reflect its hopes cannot be ruled out...