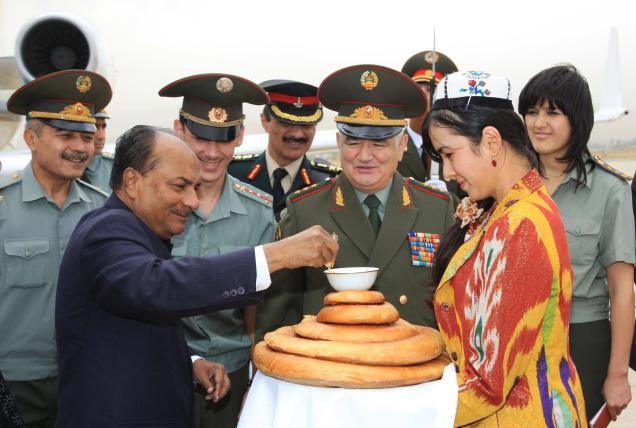 India's Defense Minister AK Antony gets a "traditional bread and honey welcome" in Dushanbe from his Tajikistani counterpart, Sherali Khairyulleov

India's defense minister AK Antony visited Tajikistan this week on his way to Russia, which served as an occasion to revive rumors that India might yet use the Ayni air base near Dushanbe. One would think those rumors would have died once Tajikistan publicly said that India wouldn't be using the base, and that it was negotiating only with Russia on the use of the base. Yet, on Antony's visit he demurred when asked about the base, the Press Trust of India reported:

India, Tajikistan and Russia are in negotiations on the joint use of the Ayni Air Base, close to the Tajik capital Dushanbe which is set to acquire strategic significance after US withdrawal from Afghanistan, sources said here.

Though Defence Minister A K Antony made a technical halt at the Base, on way to Russia he did not divulge whether a trilateral understanding had been reached to develop the base, one of the biggest in Central Asia during his parleys here.

But, sources said that in talks with his Russian counterpart Anatoly Serdyukov, the issue, including working out modalities of joint use of the base was discussed.

When asked if India was a partner in the use of the base, Antony merely described Ayni as the best air base in entire Central Asia.

So is India still in the running? Probably not. But some Wikileaks cables shed light on why these rumors refuse to die. One cable, from the embassy in New Delhi in 2007, says that India has an interest in keeping the rumors flowing, in order to send signals to China and Pakistan:

While the [Indian Ministry of External Affairs] steadfastly denies that India is planning to establish a military base in Central Asia, the recurrent rumors serve to make Pakistan and China nervous. The possibility that these stories are leaked from the GOI itself and reflect its hopes cannot be ruled out...

Another cable from 2009 suggested that Tajik sources might be ginning up rumors about the base (in this case, that the U.S. could use it) in order to tweak Russia:

In the July 7 issue the next day, Russian Nezavisimaya Gazeta alleged the Government of Tajikistan had offered [Assistant Secretary for Central and South Asian Affairs Robert] Blake the use of the Ayni airbase outside Dushanbe, citing a source within the Tajik government. The embassy denied the report in response to queries from local reporters. It is plausible that a Tajik source had made the claim, to use as a lever in negotiations with Russia...

Though, it should be noted, apparently less than a year later Tajikistan did make this offer, according to another cable. And Antony certainly was received cordially in Dushanbe. So perhaps the lesson is, never say never.