The International Court of Justice declined, however, to order more concrete measures related to Armenian prisoners and maps of land mines in Azerbaijan. 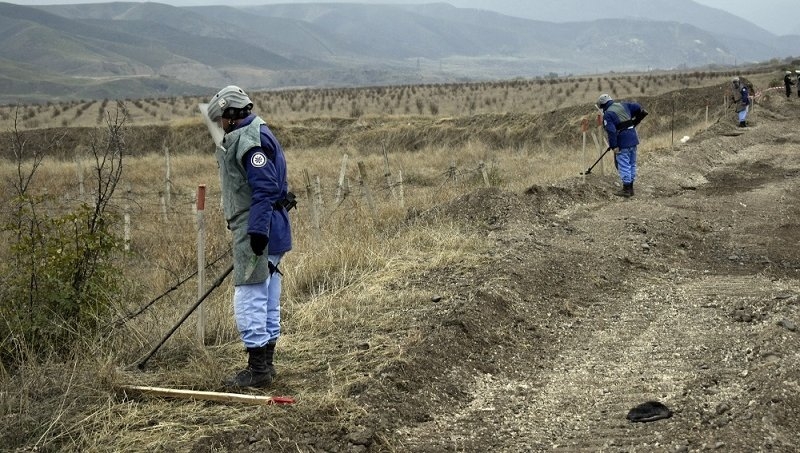 An international court has ordered Armenia and Azerbaijan to “prevent the incitement and promotion of racial hatred” against one another, and for Azerbaijan to protect Armenian cultural sites on its territory and to ensure the safety of Armenian prisoners who remain in its custody more than a year after the end of last year’s war.

The International Court of Justice (ICJ) in The Hague declined, however, to order the more concrete requests from the respective sides: from Armenia, that Azerbaijan release the prisoners and shut down a racist post-war “military trophy park,” and from Azerbaijan that Armenia hand over all maps of the land mines it has laid on Azerbaijani territory.

The rulings were made in response to twin lawsuits in the court, both filed in September, alleging violations of the International Convention on the Elimination of all Forms of Racial Discrimination (CERD). The court is likely to take years to weigh in with a final ruling on the claims, but on December 7 issued its response to each side’s request for provisional measures that the other should take in order to prevent urgent continuing harm.

It is unclear what the practical impact of the provisional measures will be, as neither side acknowledges that it is promoting racial hatred, while Azerbaijan denies that the cultural sites in question are in danger (or sometimes that they are Armenian at all) and that it is abusing the prisoners. There is in effect no enforcement mechanism to ensure that the sides carry out the measures ordered of them.

Both sides presented the rulings as a victory.

The court “granted almost all the provisional measures requested by Armenia against Azerbaijan, and rejected the majority of Azerbaijan’s requested measures,” Armenia’s representative at the ICJ, Yeghishe Kirakosyan, wrote on Twitter. “Armenia welcomes the orders and looks forward to their practical implementation by Azerbaijan and its high-ranking officials.”

Azerbaijan’s Ministry of Foreign Affairs said in a statement that it would comply with the measures related to racial discrimination, “which reaffirm existing treaty obligations that Azerbaijan takes seriously and is committed to upholding.”

Baku’s statement did not acknowledge the provisional measure on Armenian cultural sites, instead focusing on the positive: “With respect to the Court’s indication of provisional measures requested by Armenia, we note that the measures related to repatriation of detainees, as well as the closure of the Trophy Park in Baku, requested by Armenia have been rightfully rejected by the Court.”

The CERD is one of the few treaties to which both Armenia and Azerbaijan are both parties, making it a rare international forum in which they could potentially find legal support for the various post-war grievances they hold against one another. Accordingly, each side sought to present its case in terms of racial discrimination.

On the issue of the Armenian prisoners, the court ruled it was not “plausible” – one of the key legal tests to determine whether a provisional measure is warranted – that they remained in custody because of their national or ethnic origin. It did, though, say that the inhuman and degrading treatment that the Armenian side documented was plausibly the result of the prisoners’ origin. Similarly, it found plausible the claim that Armenians’ rights were being violated by Azerbaijan’s vandalization and desecration of Armenian cultural heritage sites.

As for the trophy park, the court’s ruling suggested that the Azerbaijani government had already taken steps to remove the most offensive exhibits – a move that had not been previously acknowledged by Baku.

On October 15, about a month after Armenia filed its suit with the ICJ, Azerbaijani news website Mikroskop reported that models depicting Armenian soldiers using stereotyped facial features, as well as a display of helmets purportedly from Armenian soldiers killed during the war, had been removed from the park. A park official told Mikroskop that the removal was only temporary, for repairs.

But Azerbaijan’s lawyers at the ICJ said that the removal was in fact permanent.

“[T]he Court takes full cognizance of the representation made by the Agent of Azerbaijan during the oral proceedings regarding these exhibits, namely that mannequins depicting Armenian soldiers and displays of helmets allegedly worn by Armenian soldiers during the 2020 Conflict have been permanently removed from the park and will not be shown in the future,” the court wrote in its ruling. The court was shown two letters from the director of the park which reportedly indicated that “[t]he mannequins and helmets will not be displayed at the Military Trophy Park or the Memorial Complex/Museum in the future.”

On the issue of the mine maps, the court also ruled that Armenia’s actions or inactions vis-à-vis planting land mines did not fall under the CERD’s remit.

“The claims relating to rights/obligations deemed not plausible under CERD at this phase (POW release, landmine removal) remain part of the case but face a (very) uphill battle going forward,” tweeted Mike Becker, an international lawyer at Trinity College, Dublin.

Also deemed plausible by the court were Azerbaijan’s claims with respect to “Armenia’s failure to condemn the activities within its territory of groups that, according to Azerbaijan, are armed ethnonationalist hate groups that incite violence against ethnic Azerbaijanis.” In its complaint, Azerbaijan had singled out one particular group, the paramilitary organization VoMA.

“The big take-home for Armenia is the protection of cultural sites. No big take-home for Azerbaijan, but it did get the order on Armenia to prevent racial hate speech in its territory,” tweeted another human rights lawyer, Gabriel Armas-Cardona of the University of Leipzig. “This was always going to be hard for Azerbaijan. CERD is an old-school territory-based human rights treaty. Now that Armenia doesn't control any territory in dispute, Azerbaijan doesn't have much it can claim under CERD,” he added.

“We are really happy with the court’s decision,” Sheila Paylan, an international law expert who advised the Armenian side in the lawsuit, told Eurasianet. “Even though they didn’t specifically order the release of the [prisoners of war], a large majority of the judges affirmed that their rights need to be preserved and that there is cause for concern.”

In the longer term, however, the roughly parallel rulings could benefit Azerbaijan, said Kamal Makili-Aliyev, an international lawyer at Malmö University. Makili-Aliyev has argued that Armenia’s case could have implications, under the emerging “responsibility to protect” doctrine, for the Armenian side’s efforts to gain international recognition for Nagorno-Karabakh, the territory at the heart of the conflict between the two sides.

The recent ruling makes that less likely, he told Eurasianet.

“The court acknowledged that there is a possibility that CERD was violated by both parties,” he said. “This weakens the Armenian hand somewhat, because 'responsibility to protect' is policy (not law) and relies on higher moral claims. If Armenia is also found to be in breach of the CERD, its moral claims are substantially diminished.”

With additional reporting by Ani Mejlumyan.