Massoud Hossaini discusses the fear that the news media industry faces as NATO troops withdraw and the current status of female journalists. 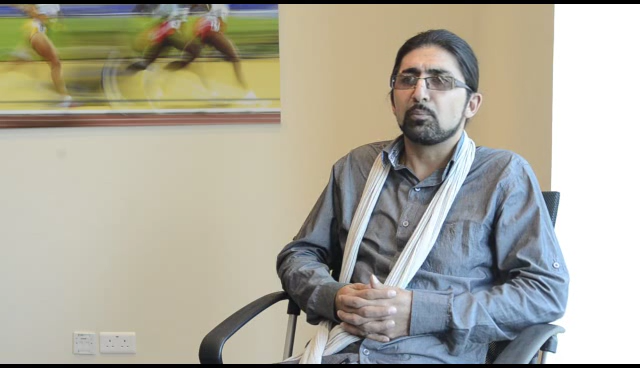 Massoud Hossaini is a staff photojournalist for Agence France-Presse and the winner of the 2012 Pulitzer Prize for breaking news photography for his image of a suicide bombing in Kabul, Afghanistan. Born in Afghanistan in 1981, Hossaini was brought by his family to Iran as a baby to escape Soviet occupation. Following the September 11, 2001, attacks on the United States, he returned to Afghanistan to join Aina, a cultural organization, and work as an independent photographer until joining the French news agency in 2007.

In part one of a two-part interview conducted in Hong Kong in late September 2012, Hossaini discusses the fear that the news media industry faces as NATO troops withdraw and the current status of female journalists.

Eurasianet: What does the Western world not understand about the Afghan news media industry?Hossaini: I should say this, that Western media organizations and all Western politicians, they think that they know Afghanistan from the way that they understand it. And they are sure about that, which is not true. What kind of information and from which place did they get it – through Pakistan, or through Iran, or through some old document from the British government? They never come to talk to us in detail. They never even trust us. And they never try to trust us. They never try to understand us. As I told you, we are close to everything, more than a foreigner. A foreign journalist comes to Afghanistan for two weeks and tries to work on one story. And then say the story is a standard for his paper. But he never knows about the background of the story. He will never try to follow up that story; which we do. We should be recognized more by the Western media. This is something that has already started and I’m happy about that. Now the Western media the Western organizations recognize us like professional people. That we are working there. This is a good start.

Eurasianet: What is the current situation concerning Afghan women working as journalists?

Hossaini: The female journalists in Afghanistan should have a [greater] moral [obligation] to work and to talk. And reflect on the events from their point of view. I’m sorry to say this, but this is the bad part of the media in Afghanistan. Because the situation is getting worse, the female journalists are leaving media. I hope there should be some kind of system so they feel that they can come back. There used to be a lot of women journalists who covered the explosions and clashes. But now they don’t.

Eurasianet: As almost all NATO troops pull out by 2014, what are the expectations from your job as a journalist concerning security?

Hossaini: Everybody in Afghanistan talks about this. Even the normal people in the street talk. They are scared for 2014. Will there be less security and will there be a lot of problems for even the normal people? The security will come down and it will be worse. That will affect journalists more than the people. It will be a lot of revenge that we had in these 10 years. It will happen after troops leave according to the coming security. Just as a really clear example: I just say myself, I took pictures and I talked about [the fundamentalists] and I showed the face of fundamentalism in Afghanistan - the groups who killed Muslims. And they count me as their enemy. And when the troops leave, they will be more flexible to move inside Kabul or inside the big cities, and come to Afghanistan. They will look for the people who talked against them, for sure. And that’s something that myself, I’m scared of in 2013 – should I stay or not.