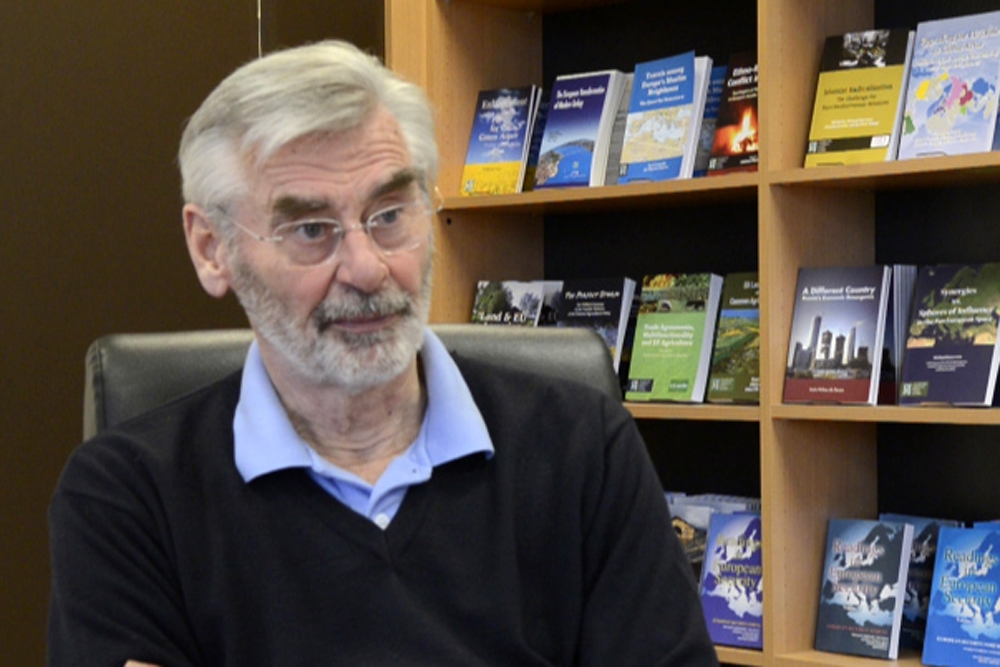 Michael Emerson is a Senior Research Fellow at the Brussels-based Centre for European Policy Studies, which is an independent think-tank focused on probing European Union issues through research, debates and publications. During a 20-minute interview on February 21, 2011, Emerson discussed the EU's role in relations with countries in Central Asia; European dependence on natural gas from the east; and the EU's security role in the Caucasus. Two short excerpted videos of the interview are available to watch (see links to the right). Below is the transcript of the fully recorded interview.

EurasiaNet.org: The European Union has not really made much progress in changing its dependence on Russian energy resources in the past five years. Why is that?

Michael Emerson: Well I wouldn’t put it exactly that way. The oil supplies are important but the oil market is very diversified worldwide so there’s no problem about excessive dependence on Russian oil. Gas of course is the more important case. But here there have been extremely important developments in the structure of world gas markets in the last years, which impact upon the question you raise. I’m thinking of the so-called underground shale gas in the United States and the increase supplies of LNG [liquified natural gas] gas from diverse sources – the Gulf, Algeria. So other sources of gas have been coming on-stream in big quantities. The nervousness of excessive reliance upon Russia is, I would say, lessened. At the same time the EU is seeking to go ahead to build various gas pipeline interconnectors within the EU and that is important. It concerns the Baltic states as well as Southeast Europe. So that’s ongoing.

EurasiaNet.org: Is there not still a bottleneck, a stranglehold, on so much natural gas that is coming into specifically Germany and the Balkans, that they are so reliant on these sources of natural gas coming into the region?

Emerson: Well they are not really bottlenecks these days in the straight meaning of the term. The Ukrainian and Belarusian gas pipelines, they function. Of course there have been huge political concerns over the reliability of the Ukrainian system, but it still exists and now it is more stabilized with [Ukrainian] President [Viktor] Yanukovich. The Northstream is being built now, so that’s online. In addition the southern corridor – Nabucco, Southstream projects are at different stages of advancement.

EurasiaNet.org: What are the expectations of the three new sources of natural gas pipelines (Northstream, Nabucco and Southstream) that are coming online in five or 10 years?

Emerson: Northstream is building so it’s going to happen. Nabucco seems to be increasingly close to commitment – real operational commitment – by the companies. There is political commitment already. That is going to rely upon Azeri gas, Iraqi gas and possibly Turkmen gas. Negotiations are ongoing for that. But very recently [European Commission] President [Jose] Baroso went to both Baku and to Ashgabat for the first time and it seems the lights there are either on green or orange. They’re certainly not on red.

EurasiaNet.org: Where does Germany fit in as one of the key players in this energy game? How does Gerhard Schroeder also fit onto this energy game with Germany and why does he still have so much influence?

Emerson: Schroeder was very important in getting the Northstream project on the map. We don’t hear very much of him now in public. Though I guess he is still working for Gazprom. There was a time when Germany might have sought to block the Nabucco initiative in favor of Northstream. But that appears not to be the case now. A blocking role by Germany with respect to the southern corridor, that simply does not exist today.

EurasiaNet.org: Why did Germany step back from potentially blocking Nabucco?

Emerson: They’ve never formally been in a blocking role. The question has been whether to have the European Union support the Nabucco project, which has been uncertain for different reasons. If you like, market preference reasons and some German interests certainly prefer or are heavily involved in the Northstream project. But this question of European Union diversification of supplies and there, as far as I can see, Germany is reasonable playing the European Union game.

EurasiaNet.org: (Is Germany) taking a step back, not really forcing their policies?

Emerson: It’s not clear to me how difficult Germany was over Nabucco. Rather, I think it’s more correct to say there has been a period of uncertainty surrounding Nabucco for different reasons. First of all, whether adequate supplies of gas could be found to fill that pipeline.

EurasiaNet.org: That issue has been resolved – they do have adequate supplies?

Emerson: That uncertainty has been slowly but progressively diminished.

Emerson: The European Union is seeking to be a balanced, supportive, diplomatic actor in Central Asia. When I say balanced, I mean balanced as between energy supply interests, security route through to Afghanistan interests and political human rights interests. They are all in there, in the package of activities that the EU is engaged upon.

EurasiaNet.org: Some of those issues are in conflict with each other and how do they resolve those kinds of conflicts?

Emerson: Energy supplies and human rights are quite often not easy bedfellows and so it is a constant issue for the diplomats to decide really what to do. In reality the European Union sustains these days a human rights dialogue with all five countries of the region. But it has to be said that is only significant or only really engaged in the cases of Kazakhstan, Kyrgyzstan and Tajikistan. In the case of Uzbekistan and Turkmenistan there is a highly formal and not really pleasant attempt at human rights dialogue because of the leadership of those two countries. At the same time, Turkmenistan has all this gas. So it’s a huge issue for NGOs – human rights NGOs – as to whether to seek to attach some Turkmen gas to the Nabucco pipeline is contradicting or having anything, any impact on the human rights regime within Turkmenistan. I don’t find myself convincing the argument of various human rights NGOs, which are saying that to open up a western gas pipeline across the Caspian Sea is going to do anything much for the human rights situation within Turkmenistan.

EurasiaNet.org: Is there danger that European Union cynicism will come back to haunt it somehow concerning the political climate in many Central Asian countries?

Emerson: Cynicism, those are your words. Not mine. The multiplicity of objectives of energy security, strategic security and political balance – all those three are firmly embedded in the foreign policy objectives of the European Union and you would find the same with the case of the United States. Everybody who is slightly experienced in this business knows that the reconciliation of these multiple objectives can at times be difficult indeed. And the choices as to which weight to give to which of those objectives in particular cases, that’s something that has to be worked through. Whether it is correct to describe that as cynicism may be a matter of taste.

EurasiaNet.org: Within the European Union there are many different types of economic interests. Given this wide array of attitudes and economic interests within the EU, is it possible for the EU to take a firmer stand against Central Asian countries, Azerbaijan or Russia?

Emerson: There are two different issues there. One is the specificity of different member states interests and whether that impedes or not the formation of a common view. And, then secondly, whether that common view needs to be presented more firmly. On the first point, it is normal facts of life that there are many large companies in different members states of the European Union that have their commercial interests. The national foreign ministries, part of their role is to support their own companies in the business of commercial competition. That does not necessarily impede the formation of foreign policy positions if you can separate the two. Kazakhstan – the French are in there, the British are in there, the Italians are in there. All of them are major oil companies or gas companies at work. I wouldn’t see in that, particular problems of conflicts of interests – similarities of interest. On whether the EU should take a firmer view – what do we mean by that? Take Kazakhstan and Uzbekistan, those two cases. Kazakhstan and its OSCE presidency last year. Yes, I would have liked to have seen the EU take a firmer stand over the imprisonment of certain very well know human rights defenders. [Human rights activist Yevgeny] Zvotis is the man in question, who was imprisoned just before the beginning of Kazakh OSCE presidency. And that was at the time when [Kazakh President Nursultan] Nazarbayev was going around to everyone saying ‘please can I have my summit in Astana.’ I think the message should have been, we’ll only agree to this on condition this man is let out of prison. There I would have sympathy for having taken a firmer view. Now the Uzbekistan case is a more recent one. [Uzbek] President [Islam] Karimov recently came to Brussels and as a result Uzbekistan now agrees that the European Union should open a delegation in Tashkent and therefore deepen its engagement with Uzbekistan. Human rights NGOs were very unhappy about this, because they say this is giving up on the principle stand that the EU took in 2005 over the Andijon massacre – five years ago. The remaining sanctions over Andijon were lifted not very long ago and this step of enhancing diplomatic relations has been taken since. Was that a good idea, was that backing off a principled position or not? I don’t really follow here either the view of the human rights NGOs. The case for engaging with Uzbekistan more thoroughly, that exists, the business of hanging on to those very minor sanctions – its utility was diminishing over time. Far more important for President Karimov these days is what conclusion he and other Uzbeks draw from the revolt in the Arab world. Whether the revolt in the Arab world already leads on to increase demonstrations in Iran, so it’s getting a little bit beyond the Arab world and then what conclusions are to be drawn in Central Asia. I think we may notice that President Nazarbayev has already noticed because he decided to shelve a plan that was in the cooker for a referendum, which would be a plebiscite, for him to continue to be president until the year 2020 – for the rest of his life. Already the Arab revolts have had an influence on Kazakhstan. And President Karimov must be feeling somewhat nervous as well.

EurasiaNet.org: Does the EU have a security role to play in the Caucasus?

Emerson: Georgia war in 2008; and Nagorno-Karabakh unresolved. In the case of Georgia, [French] President [Nicolas] Sarkozy, then president of the European Union, had an important role in mediating between Russia and [Georgian President Mikheil] Saakashvili’s Georgia and getting an end to the outright war and getting a withdrawal of the Russian military back into Abkhazia and South Ossetia. Since then there has been an ongoing Geneva process, which is the only forum where Abkhazia, South Ossetia, the European Union, Russia, OSCE talk about things to try to make the conditions across the borders between South Ossetia and Georgia, in particular, a little less unpleasant and more civilized. The borders are basically closed. The question is the interests and the treatment of the individuals who were caught in the crossfire of that war. There’s an ongoing role there. That role is actively supported by the European Union. But still, that is a relatively marginal, useful, but secondary activity. It’s not changing the map of Georgia and those two secessionist territories.