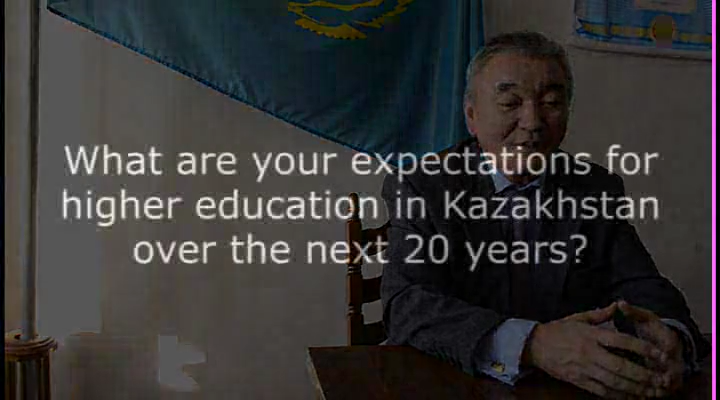 Dr. Mukash Burkitbayev is the vice rector of Al-Farabi Kazakh National University in Almaty, Kazakhstan. As professor of chemical sciences, Burkitbayev was jointly awarded in 2007 the NATO Science Partnership Prize for his work on testing radiation levels at the Soviet-era Semipalatinsk nuclear test site.

During an interview conducted in Almaty, Kazakhstan, in November 2012, Burkitbayev discusses the country's Bolashak scholarship program, the future of higher education in Kazakhstan, and the expectations of the new Nazarbayev University in Astana.

EurasiaNet.org: Since 1993, President Nazarbayev’s Bolashak scholarship program has sent thousands of students abroad for international education. Is it still in operation, and what have been its successes and failures?

Dr. Mukash Burkitbayev: It was a very exciting program for our youth especially after becoming independent and the world became open to our youth. Of course in that case it was the very right way, because educated youth are the future of our country. I know the Bolashak program gave opportunity to many talented students to go to overseas universities [and] graduate. Most of them, of course, came back to our country and now work in new areas of activity, for example, in industry, in the ministries, business. Some of them are working at the universities. And they come with a new mentality, because all the youth they accept European culture and the European educational level. They start to implement a new view for education, also for many kinds of activities. I know that because my daughter also is studying in the framework of the Bolashak program in Canada and hopefully this year she will finish her masters [degree] study at Saskatchewan University. She is very eager to come back and to use her knowledge to develop Kazakhstan. About failures, I know many youth still now are looking for, searching for a job with a high salary. Unfortunately, [it’s not possible] in our area [for them] to take the kind of salaries that they want. Most of them do not properly use their knowledge in Kazakhstan. But step by step they will find a job because in the Bolashak program they have a special center which is responsible for [finding] jobs for the Bolashak students in Kazakhstan. If it is a problem, it is a short-term problem, because the government spent a huge [amount] of money for their studies and the state should use their knowledge. The knowledge [should] come back and it should work.

EurasiaNet.org: How much money and where is it being spent to support this initiative?

Dr. Mukash Burkitbayev: I don’t know exactly about the costs, but I know, feeling from the position of my university that the minister of education spent huge money. Just several examples, the minister of education has created a special program for inviting foreign professors to Kazakh universities. This money comes from the ministry’s special program. Another excellent program, it’s a program, which will [allow] our students to take part in the process of academic mobility. Many of our students have law, financial background and this program [offers] great support to students, because all the financial side the state takes for [itself]. And now, for example, in the framework of that program, more than 100 students from my university accept a possibility to go make a training to accept the credits at the European, USA and the Japanese, South Korea universities.

EurasiaNet.org: What is the purpose behind trying to educate the best and brightest at home now, compared to the past 15 years when the top students were sent “overseas?”

Dr. Mukash Burkitbayev: It is not so terrible for the country, because when we became independent some of the students go to accept knowledge in the overseas universities. And most of them now came back. But also it’s more important that our bright students, who were working at the overseas universities, and now we have a good relationship, not only at the personal level, but at the university level. Our former students, who are working now at the overseas universities, they have become supervisors of our students. They teach us. They come to our university as a visiting professor to teach with the new approaches to scientific [research]. It’s good. So we do not lose our best students. Our best students now become the heads of laboratories. Some of them are heads of the institutes and they very much want to be in contact with our universities.

EurasiaNet.org: What are the next phases in developing and upgrading higher education institutions in Kazakhstan?

Dr. Mukash Burkitbayev: Now we would like to be involved with the process of internationalization. It is some part of globalization processes. For that purpose of course we are trying to create good relations with overseas universities. It means we would like to create joint academic programs. We are designing joint research projects to increase academic mobility between not just students but between students and staff also. For that purpose, one of the serious barriers is the English language. In my university we start to use English not just for our research activity, because it’s absolutely necessary, but also for education. And there are many special courses in my university that we start to teach in English. We invite more foreign professors and lecturers just in English. We opened many English learning centers with the British Council, Norway, looking for creating some centers with European universities. Just for improving the skills in English.

EurasiaNet.org: Kazakhstan has almost 150 higher education institutions for a population of about 17 million. There are external reviews that have said the schools are part of an endemic “diploma mill” system, where it is more important to have a diploma than a possible job after graduation. How is Kazakhstan trying to change this perception that there are too many degrees being awarded, but not the labor market to support the thousands of yearly graduates?

Dr. Mukash Burkitbayev: You’re right, there are so many universities for a [population] of 15 million. It is too much. Our minister of education understands this situation and now they are making a special policy. They make more requirements for the universities for the scientific material base, for quality of the staff. If the universities do not meet with such requirements such kind of a university will be closed or it will [be joined with another]. This is the main activity of ministry of education. And life demonstrates it, which university should be top; which university should be closed. In those cases according to our programs in higher education we are going to make special institutes, [such as] national research universities, research universities, or universities orientated for innovation activities, then colleges. Something like that.

Dr. Mukash Burkitbayev: Now the Bolashak program changed [a little] their accent and their activity. I know we are not sending to overseas universities students from the bachelor level, but [now] just PhD students and also university staff. It’s good because they are well known [people], they should [come] back. They know what they will do in the future. Of course we are sending and of course we would like to invite youth to our universities. Unfortunately not so many students come to Kazakhstan to accept knowledge; maybe in special medical faculties. But as for my university, [every year] we usually have more than one thousand foreign students. Most of them are from China, they are from South Korea, and from our neighbors of the Commonwealth of Independent States. And ten to twenty master, PhD students who are making research, dealing with Central Asia problems. Because we understand that Central Asia becomes an interest for the world. It is a special geopolitical situation in Kazakhstan. So they come just for research purposes not for accepting knowledge yet. But I do hope that when our level of English will be enough, foreigners will come to us. Because our neighbors like Pakistan, India, they are looking for where they can study. But unfortunately, most educational programs in our universities are in Russian and Kazakh. Now we are including English, so we become plural language universities. In that case I am sure the foreigners will come.

EurasiaNet.org: Concerning higher education, where does Kazakhstan see itself in relation to the rest of the world in five and ten years?

Dr. Mukash Burkitbayev: It’s the opinion of all international experts the knowledge level of Kazakhstan citizenship is relatively very high in comparison with many countries. Of course we understand that the country that has good ambition plans in the future should be [highly] educated. I know now that our president, our ministries they [give] all their support to higher education. I am sure that maybe in 20 years at least two universities of Kazakhstan will be in the list of the top universities. Because it’s the main task our president gives us, the higher education system. We will try to reach this position. One of these universities should be al-Farabi University.