Fear of the Chinese authorities had kept Zhengis Zarhan silent about the abuses his wife was suffering in Xinjiang, until they did something to her that made him “crazy”. 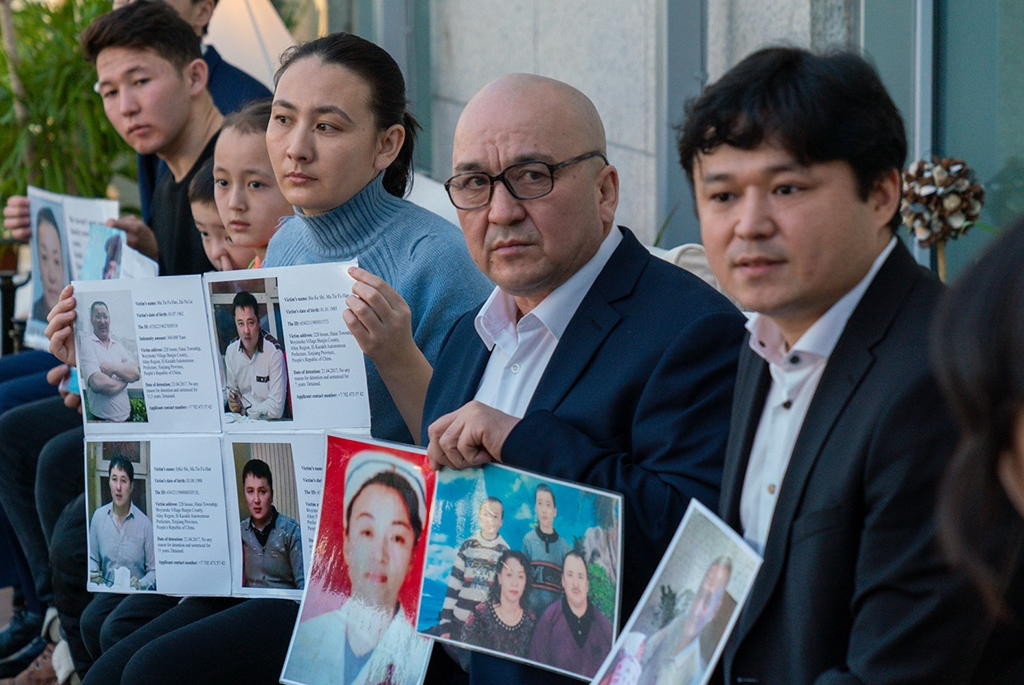 Zarhan, center, in a photo taken during his meeting with State Department officials. (U.S. Embassy Nur-Sultan)

When Zhengis Zarhan first heard that ethnic minorities were being rounded up in China’s far northwest, he was not particularly worried about the safety of his wife and eldest son back home. Communist Party brass were only targeting religious people and mullahs, he thought. Although he and his family were ethnically Kazakh and nominally Muslim, Zarhan believed they were a model of successful integration into the Han Chinese establishment.

Zarhan had spent his career as a civil servant in his native Chinggil County, in Xinjiang’s Ili Kazakh Autonomous Prefecture. His wife, Saule Meltai, had been a senior nurse at Chinggil People's Hospital for nearly three decades, earning a handful of awards. Muhtar, the eldest of the couple’s two sons, was a student of Chinese literature.

True, the government had pushed Muslim minorities to further assimilate with Hans, who make up the vast majority of China’s population. The final indignity came when schools stopped teaching Kazakh.

“I wanted my children to be able to grow up with their language and traditions,” Zarhan recalls. “Since we couldn’t move all at once, I came first with our youngest son, Muqadas, in 2015. My wife and Muhtar remained and visited us whenever they could.”

He saw no reason to hurry at first. But by 2017, alarmed by news of detentions in Xinjiang, and having bought a house in Almaty, Zarhan urged his wife during a summer visit to sell their apartment in China, quit her job and join the family in Kazakhstan as soon as possible.

That September, when she reentered China, she became trapped.

When Meltai and Muhtar crossed the border, the authorities confiscated their travel documents. Meltai hung onto her job at Chinggil People’s Hospital for a few months, but visits from government minders became more frequent; they would ask questions about her and her son’s visits to family abroad. The next January, in 2018, Meltai was detained and placed in a reeducation camp, along with perhaps a million other Muslims in Xinjiang.

Security officials told her that she had been “two-faced” for wearing a headscarf, abstaining from alcohol, and visiting Kazakhstan. Zarhan, who has pieced together what happened to his wife through recent conversations with her on WeChat, says Chinese authorities cannot stomach the idea anyone would want to leave.

In interviews with Eurasianet facilitated by activists with the Xinjiang Victims Database, Zarhan says Meltai was sent to a so-called “re-education camp.” Like other detainees, the middle-aged nurse was forced to study “ethnic unity,” counterterrorism, and President Xi Jinping’s speeches.

“She told me that it was freezing cold during the winter, and that the guards would leave the windows open. The guards would throw steamed buns through a hole in the door. Sometimes they were not given food. They had very little time to use the washroom,” Zarhan says.

Meltai’s health deteriorated. She became partially paralyzed, losing the ability to walk and control her bladder and bowel. At one point during her detention, she was taken by wheelchair into what appeared to be a courtroom, where she was told she would be sentenced to seven years in prison.

Nine months after being detained, Meltai had to be rushed to a hospital in Urumchi, the capital of Xinjiang. “She had complained about sharp pains for a long time,” Zarhan says, “but the doctors at the camp would not do anything until it really became serious.” At the hospital, metal pins were inserted into her lower spine. Three months later, she underwent a craniotomy. Perhaps due to her severe health troubles, Meltai was not returned to the camps after either surgery but was allowed to recuperate at home. Her travel documents were not returned, nor were those of her son.

Meltai’s relatives in Xinjiang had waited a month before informing Zarhan of his wife’s detention, fearing that outside attention would only worsen her situation. Initially Zarhan followed their advice and kept quiet, hoping that his family would eventually be allowed to leave China. He ended his silence after a male Han Chinese official was assigned to live with his wife and son, as part of China’s “pair up and become a family” program.

“It made me crazy,” Zarhan recalls. “After that I stopped listening to her relatives and I began speaking out.” Zarhan made a number of video testimonies for Atajurt, a human rights organization in Kazakhstan, spoke to reporters from Radio Free Asia and sent appeals to the Chinese Embassy in Nur-Sultan.

This past February, Zarhan, along with four other Chinese Kazakhs whose family members have been affected by the crackdown, met with U.S. Secretary of State Mike Pompeo while he was visiting Nur-Sultan. Zarhan says that Pompeo (who has characterized China’s policies in Xinjiang as “the stain of the century”) listened attentively to his story and, with a firm handshake, promised to do whatever he could.

Zarhan says the Chinese authorities have responded to his activism by canceling his pension and falsely accusing him of illegally fleeing to Kazakhstan, leaving him vulnerable to the charge of holding dual citizenship (illegal in both Kazakhstan and China). In light of this pressure, Zarhan sometimes fears he could be putting his family at risk; he wonders if he himself could face repercussions, given Kazakhstan’s close ties to China. But he has made up his mind to continue speaking out. “If I remain silent,” he says, “my wife and son will never be allowed to leave […] I encourage my wife to tell me everything that is happening to her and to hold back nothing. That way, no matter what they do to her, the world will know the truth and the Chinese government can be held accountable.”

Meltai’s health has improved and she is now able to walk. Zarhan recently recorded a video conversation with her and posted it online. She says she cannot sleep without medication. She says the Chinese authorities continue to threaten her with reincarceration if she does not stop her husband’s campaigning. Her relatives and friends have begun to shun her, fearing that they may be targeted by association. As for their son Muhtar, his outwardly normal life as a middle school teacher conceals constant fear of imprisonment.

“He is only 26,” says Zarhan, “but he has already begun to lose hair and his eyesight is failing.” Since Zarhan’s meeting with Pompeo, both his wife and son say the harassment has increased. Local party officials appear to monitor their movements through a security camera installed outside the entrance to their apartment.

This June Zarhan says that four officials from Xinjiang’s security bureau came to Chinggil County and met with his relatives, colleagues, friends, and casual acquaintances, urging them to sign a document describing Meltai and Zarhan as anti-Chinese “two-faced traitors.”

Knowing that he is his family’s only hope, Zarhan continues to make regular trips to Kazakhstan’s capital to protest alone outside the Chinese Embassy.

“My family has been suffering for three years,” he says. “And there are thousands of families split apart just like mine. The Chinese government needs to respect the right of families to be together and allow minorities the same rights that Han Chinese have.”