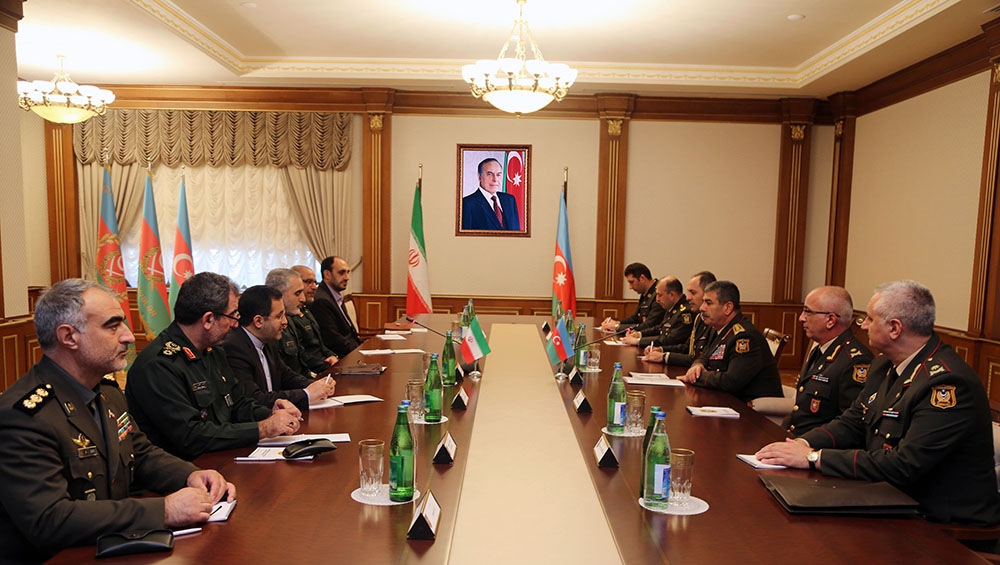 Iran and Azerbaijan have held the first meeting of a military cooperation working group, signaling growing defense ties between the two wary neighbors.

This working group was established back in 2015, on a visit by Iranian Defense Minister Hussein Dehgan to Baku. Since then military-to-military contacts have increased, with visits to Tehran by Azerbaijan President Ilham Aliyev in March, and then Hasanov in April. Azerbaijani naval vessels also made their first-ever visit to Iran earlier in October.

But the two-year delay in holding the first meeting raised questions about how serious Iran and Azerbaijan are about genuine cooperation, particularly considering Azerbaijan's close military relationship with Israel, Tehran's main foe.

The question of potential arms purchases from Iran has been especially closely watched. Aliyev, during a 2016 meeting to Germany, said: “It is no secret that we buy weapons from Turkey, Israel, Belarus, Iran and many other countries, which helps to modernize our army.” The mention of Iran was new, but the statement was not picked up by any state media and no details were further offered.

Shortly following last year's “April War” with Armenia over Nagorno Karabakh, retired Lieutenant General Yashar Aydemirov told local media that Azerbaijan used Iranian weapons during that conflict. But the weapons he identified, including howitzers and multiple lauch rocket systems, are of Russian origin, produced in Iran and offered for export by Iran's Armament Industries Group (AIG) – which is on the Western sanctions list. Aydemirov's statement was received skeptically, given that Azerbaijan could easily by those weapons from Russia without breaking the sanctions, which it has been loath to do.

In any case, these weapons are relatively outdated, and do not provide any significant advantage for Azerbaijan’s military arsenal. That's especially true compared to the contributions Israeli weaponry, particularly drones, as well as Turkish howitzers and multiple launch rocket systems have made to Azerbaijan's armed forces.

For Azerbaijan, the most attractive Iran military product would be ballistic missiles, which Baku has sought since September 2016, when it emerged that Armenia had acquired advanced Russian Iskander-M missiles. “It is not yet clear how much Tehran is ready to cooperate with Azerbaijan in this field [ballistic missile technology. When it comes to the rest of the Iranian military industry, Azerbaijan is barely interested,” wrote the government-linked haqqin.az news site.

For Iran, meanwhile, selling weapons to Azerbaijan carries a significant security risk, given the possibility that Azerbaijan could share the technology with Israel. In addition, Iran is not inclined to favor either Azerbaijan and Armenia and thus far it has not sold any conventional weapons to either state.

More than arms trade, however, Azerbaijan-Iran military cooperation focuses on deescalating potential tensions, as the two countries have had occasional violations both on their land and sea borders, including illegal border crossings, which sometimes lead to armed skirmishes.

“The issues concern prevention of various kinds of incidents that have taken place along the border,” said Vladimir Evseev, head of the Caucasus Department of the Moscow-based Institute of CIS Countries. “It is important that there should be at least a direct line of communication between the two border agencies to avoid escalation of such incidents.” These sorts of incidents have markedly decreased since 2015, in part thanks to the military cooperation agreement. It remains to be seen if the two sides are willing to take the cooperation further.