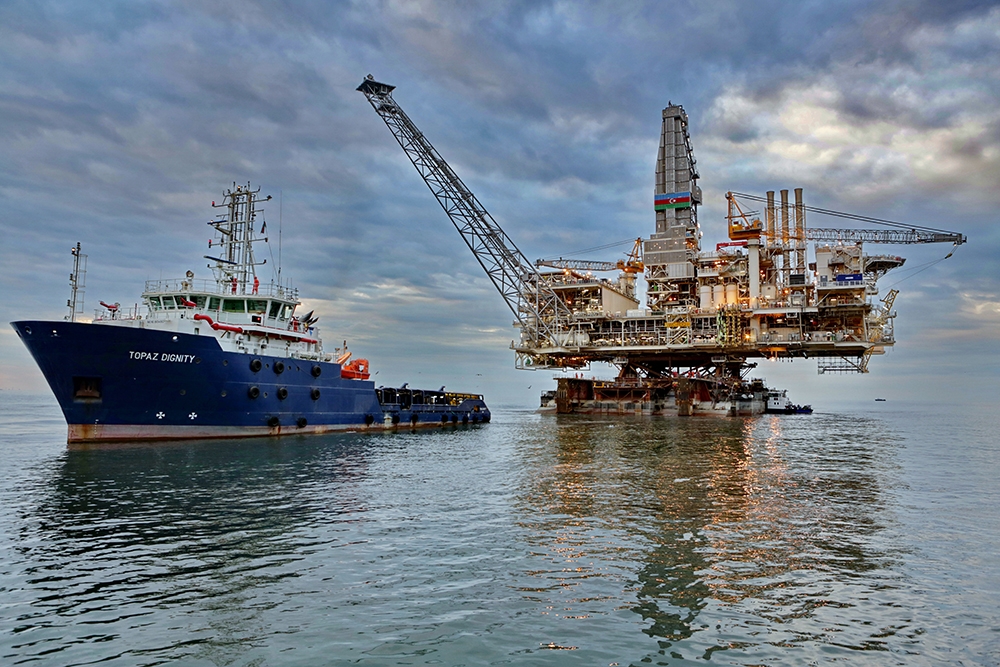 BP's West Chirag platform is one of several pulling up oil and natural gas from the Azeri-Chirag-Deepwater Guneshli field in the Caspian Sea. Azerbaijan provides around 90 percent of the gas needs of its South Caucasus neighbor Georgia. (Photo: BP)

As the price of natural gas keeps declining, competition among Caspian Basin suppliers is picking up.

Georgia, which serves as a crossroads for Caspian Basin energy exports, has become the focal point of a three-way scramble among natural gas exporters. Citing a wintertime shortage of natural gas, Tbilisi is considering deals from Azerbaijan, which already supplies 90 percent of Georgia’s gas; Russia, which provides the other 10 percent as a fee for transiting Russian energy to Armenia; and, now, Iran.

Georgia’s selection could have long-term implications. Diversifying Georgia’s gas supplies would mean moving away from Azerbaijan, the energy power behind the Southern Gas Corridor, an upcoming mega-gas-export tube that crosses Georgian territory en route to Turkey and Europe. Both the European Union and the United States have promoted the corridor as a way to wean Europe off gas imports from Gazprom, Russia’s energy behemoth, and an economic tool often used by the Kremlin for geopolitical purposes.

“Azerbaijan is our strategic partner and friend, but it is also a virtual monopolist on the Georgian market,” Kaladze told EurasiaNet.org. He claimed that Baku does not have the technical capacity to make additional gas deliveries, which are needed due to rising demand in rural Georgia and higher electricity production. Georgian officials have said the country currently suffers from a gas shortfall of 2.5 million cubic meters, a tiny fraction of overall annual use. The seemingly small deficit raises questions about why Georgian officials are considering new gas deals.

After the price of Azerbaijani gas for corporate clients increased last spring by roughly 30 percent (to $318 per 1,000 cubic meters), Tbilisi approached Gazprom, and received “a very competitive offer,” he said.

The prospect of increased purchases from Gazprom heightens fears among many Georgians. Enmity for Russia remains widespread in Georgia since the two countries fought a brief war in 2008. Kaladze has downplayed the notion that a deal with Gazprom would compromise Georgian sovereignty in any way.

“At best, it may go from 10 to 12 percent [of the Russian share in Georgia’s gas imports],” Kaladze told EurasiaNet.org. Only a handful of corporate gas consumers would benefit from Russian gas, he added.

Kaladze said he took Gazprom’s proposal back to Baku, hoping to negotiate a price match, but that, as yet, has not happened. Georgia and Azerbaijan for now have agreed to redistribute supplies so that Georgia gets less Azerbaijani gas in summer and more in winter, when consumption peaks.

Following the lifting of international sanctions, Tehran has proposed selling Georgia up to 14 million cubic meters per day via Armenia, which is currently dependent on Russian-supplied gas.

Normally protective of its own status, Russia seems surprisingly amenable to Iran’s moves. So far, Gazprom has voiced no objections to the South Caucasus’ energy pie expanding to include Iran.

Energy analyst Ara Marjanian, president of the E-Cub, an energy think-tank in the Armenian capital, Yerevan, believes that the partnership between Iran and Russia in Syria, as well as the end of sanctions against Iran, explains Gazprom’s apparent tolerance.

“Let’s not jinx it, but the new geo-strategic and economic realities made Russia more cooperative,” Marjanian commented.

Not all Georgians welcome the idea of obtaining Iranian gas via Armenia. Liana Jervalidze, an independent energy analyst in Tbilisi, believes that energy security, economic benefit and geo-strategy dictate that “It is in Georgia’s best interest to remain a place for gas transit to Armenia, not the other way round.”

Kaladze earlier had claimed that, to push Tbilisi to accept cash rather than gas as a transit fee, Gazprom had threatened to stop supplying Armenia altogether and let Armenia get its gas from Iran. Whether Iran’s proposal and Gazprom’s alleged threat are related is not known.

Taking Iran up on its offer does not seem immediately feasible for Tbilisi. For now, Armenia’s Gazprom-run pipeline to Iran can handle only about 1.1 bcm per year, and its line to Georgia takes only Russian gas. No mention has been made of building a second pipeline.

Steve LeVine, energy commentator and adjunct professor of security studies at Georgetown University, calculates that any Moscow-Tehran cooperation in Armenia, where Moscow has carefully cultivated a dependence on Russian energy, will be limited.

“There is no history of Russia, certainly modern-day Russia … deserting an intimate ally in that manner,” LeVine said.

“I don’t see Iran and Russia going hand-in-glove,” he continued. “They are rivals; Iran will act in its own interest.”

Nonetheless, even the notion of using Armenia as a transit country for Iranian gas enrages its foe, Azerbaijan, Georgia’s dominant gas supplier.

Already miffed by Kaladze’s talks with Gazprom, Baku, to keep its cards in play, has promoted Azerbaijan’s own potential as a conduit for Iranian gas – an idea deemed “common sense” by a columnist for the government-aligned Trend news agency.

On February 17, while on a trip to Tehran, Kaladze announced that Tbilisi could consider this option, too.

Pipelines from Azerbaijan to Georgia and on to Turkey and Europe might appear an additional attraction for Iran. Tehran earlier this year expressed interest in such an export route, but has made no official commitment to join the Southern Gas Corridor.

If Iran’s ultimate market is Europe, commented Baku-based energy analyst Ilham Shaban, director of the Caspian Barrel energy-research center, it can connect directly from the northwestern Iranian city of Tabriz to the Turkey-based Trans-Anatolian Natural Gas Pipeline, the midsection of the 3,500-kilometer-long Southern Gas Corridor, designed for pumping Azerbaijani gas through to Europe.

Meanwhile, Tbilisi is pursuing yet another option – increasing its take from the South Caucasus Pipeline, the Corridor’s initial section.  If that works, Kaladze stated on February 18, then Georgia would not buy Iranian or additional Russian gas.

*This story was adjusted on February 22 to clarify Iran's stance toward joining the Southern Gas Corridor and to remove the statement that Georgia's diversification away from Azerbaijan would call the Corridor's future into question.