Iran Shoots Down Israeli Drone, Says It Was Launched From Azerbaijan 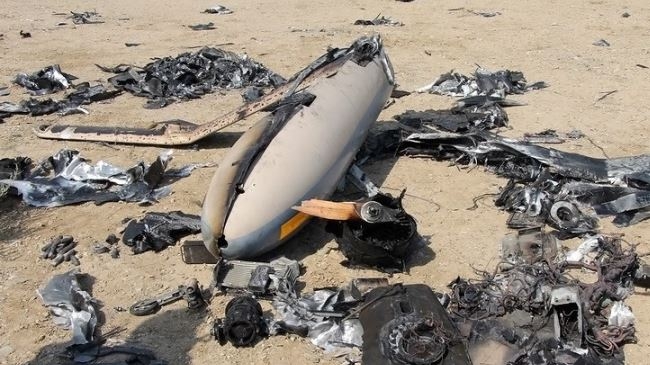 A photo, released by Iran's Revolutionary Guard Corps, showing what it says is an Israeli drone launched from Azerbaijan and shot down by Iran.

Iran has blamed a "former Soviet republic to the north" for being the base of an Israeli drone that Tehran claims to have shot down earlier this week. Although the Iranian officials didn't specify Azerbaijan, that is the only country they could mean, and Azerbaijan's government has denied the claim, calling it a "provocation."

Two senior Iranian military officials have said that the Israeli Hermes drone that they shot down did not come from Israel, but from "the north." Via Fars News Agency:

Iran knows well from which country and which base the Israeli drone that it shot down a few days ago had taken off.

"What some people say that the drone had started its flight from Israel is not correct and we are almost certain about its origin, yet we would like to reserve judgment at present," [IRGC Lieutenant Commander Brigadier General Hossein] Salami told reporters in Tehran on Tuesday.

He further pointed out that the drone had been traced as soon as it cross Iran's borders, but "it was allowed to enter the country to see the intention (of the hostile forces operating it) and then we targeted and hit it at the right time"...

A day later on Wednesday, a higher ranking Iranian commander said that downing the Israeli hostile drone was just the beginning of Iran's retaliatory moves and Tel Aviv should wait for Tehran's tougher responses, adding that the drone had started its mission from a country North of Iran....

He... expressed regret that a regional country North of Iran has collaborated with Israel and served as a launch-pad for the mission, and said, "We are waiting for that country which has cooperated with the Quds Occupying Regime (Israel) to send the drone to Iran to make up for its wrong deed; otherwise, we will declare its name."

Jazzayeri said that the drone had taken off from a former Soviet republic in the North of Iran.

This isn't the first time that Iran has criticized Azerbaijan for its military alliance with Israel, and there have been a number of reports over the last couple of years that Azerbaijan was allowing Israel to base drones there. Those reports have never seemed convincing, as such an arrangement would seem to provide little benefit to Azerbaijan while exposing it to huge risk. But the well respected American aviation blogger David Cenciotti has carefully looked at photos and gives credence to the Azerbaijan theory:

[T]he drone is identical to a mysterious drone shot down in 2011 by Armenian forces in the disputed territory of Nagorno Karabakh. At that time Azerbaijan denied the unmanned aircraft belonged to Baku. Then a drone of the same type, most probably made in Israel (with inputs from both the Hermes 180 and 450) was displayed during an Armenian parade ...

Curious... Anyway, Azerbaijan official Ali Hasanov called the claim a "provocation by outside circles" (while sidestepping the fact that it was in fact Iran who made the claim). So, since it sounds like Azerbaijan is not going to "make up for its wrong deed," Iran is going to provide some more evidence? Stay tuned.