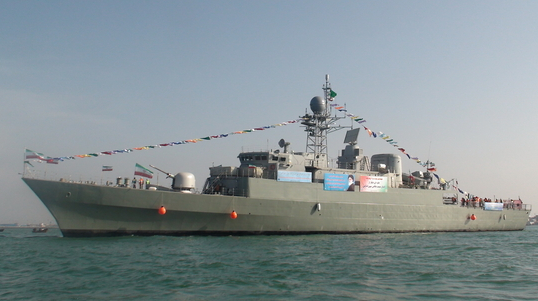 Iranian warships are on a rare trip around the Caspian, calling on their neighbors in Russia and Azerbaijan in a period of new uncertainty for the sea.

Three Iranian vessels are scheduled to berth in Astrakhan, the home of Russia's Caspian Flotilla, on Wednesday. After three days in Astrakhan, the ships will head to Baku and then back to Iran. According to Iranian media it is only Iran's second naval visit to Russia and apparently its first to Azerbaijan.

Russia, the dominant power in the Caspian, makes these sorts of small, friendly naval visits around the sea somewhat regularly. In August, a small contingent of Russian ships visited the Iranian coast and conducted joint exercises.

But Iran's first such visit was in the summer of 2013, and then only to Russia. The visit to Baku isn't the only novelty; this time Iran is sending its new frigate, the Damavand, Iran's most powerful ship on the Caspian which was launched earlier this year.

Although the Caspian is the site of much greater attention these days as a result of Russia's surprise missile launch to Syria, this visit was no doubt planned well in advance. Russian Defense Minister Sergey Shoigu visited Tehran in January and on the agenda was more naval port calls.

The visit to Baku is particularly interesting; Azerbaijan and Iran have notably cool ties and Baku's naval development has been guided by American advisers against the backdrop of a strongly perceived threat from Iran. Nevertheless, Azerbaijan has been tentatively exploring better military relations with Iran as the West begins to normalize relations with Tehran.