The Damavand is Iran's most powerful ship on the Caspian, and has been at the center of Iran's growing naval diplomacy on the sea. 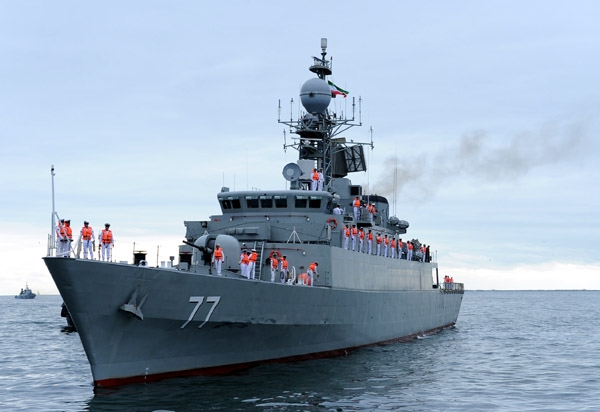 Iran's Damavand frigate, on a visit to Baku in 2016. It was badly damaged in a storm. (photo: Azerbaijan Ministry of Defense)

The flagship of Iran's Caspian naval fleet has been seriously damaged, and two sailors gone missing, in an accident caused by a storm, Iranian military authorities reported.

The accident happened on January 10, when severe winds pushed the Damavand frigate into a jetty while it was in its home port of Bandar Anzali. Initial reports said the damage to the ship was “minor,” but on January 17 an Iranian military spokesman acknowledged that “the assessment teams have found out that the vessel has suffered serious damages and needs a complete overhaul,” said the spokesman, General Shahin Taqikhani, the Tasnim news agency reported. Tasnim and other media published photos of the ship listing substantially. Gilnegah, a local news website, reported that the storm caused waves up to four meters high.

General Taqikhani also said that a search operation is underway to find two crew members who went missing after the accident and have still not been found. Gilnegah reported that six sailors were thrown overboard from the accident, but four of them were rescued.

The Damavand was launched in 2015, and is the largest and most capable ship in Iran's gradually growing Caspian fleet. It measures 95 meters and 1,500 tons.

Its primary mission appears to be training, as Iran's strategic priorities lie in the waters to its south, in the Persian Gulf, rather than in the Caspian. At its launch, the state-run Press TV called the Damavand the “country’s state-of-the-art training destroyer, equipped with modern radar, electronic and reconnaissance systems.”

But it also has been at the center of Iran's growing naval diplomacy around the Caspian, as it led Iran's first-ever flotilla to visit Azerbaijan in 2016, and also made the first-ever Iranian naval visit to Kazakhstan last year.

The Secretary of Iran's Supreme National Security Council, Ali Shamkhani  attended the inauguration in 2015 and called the Caspian a "sea of peace, friendship and security." And he took the occasion to repeat the oft-made claim that "outside powers" (read: the United States) were trying to sow dischord on the sea. He “noted that Iran seeks to use all its potential to 'demonstrate might' and 'create deterrence' in the face of the region’s common threats, specifically terrorism,” Tasnim reported at the time. “Despite Iran’s cooperative stance towards the neighbors, certain powers are inclined to create 'fabricated rift' in order to prepare the ground for their presence in the region, Shamkhani added.”