Iran's New Oil Discovery May Be In Azerbaijan's Waters 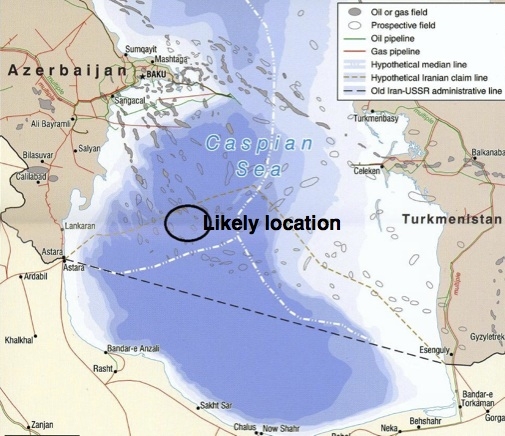 Iran recently announced that it has discovered a substantial oil deposit -- about 10 billion barrels -- in the Caspian Sea. That would be about seven percent of Iran's total reserves, and the country's first discovery in the Caspian in over a century. That in itself is pretty remarkable; Iranian President Mahmoud Ahmadinejad said it will "change the energy and political balance of the region."

But the situation could get a lot more complicated, according to regional analyst Alex Jackson. In a recent presentation, which he provided to The Bug Pit, Jackson noted that the discovery appears to actually be in waters claimed by Azerbaijan. Iran hasn't provided a precise location, but has said it is 188km north of Roudsar in Gilan province and 250 km northwest of Neka. See the map here, from Jackson's presentation, where the white dotted line is what Azerbaijan considers to be the southern boundary of its waters, while the brown dotted line represents what Iran considers to be the northen extent of its waters. And right in the middle of that is this new discovery (actually two separate, though connected, fields, called Sardar Jangal and Sardar Milli). In addition to the 10 billion barrels of oil, it also holds 50 trillion cubic feet of gas, according to Iran.

The rig that discovered the oil, the Alborz, happens to be the same one that figured into a standoff between Azerbaijan and Iran in 2009. In that incident, recall, Azerbaijani officials reported that the Alborz was prospecting for oil in waters that they considered theirs. The Wikileaks cables that reported on the incident didn't specify the precise location, but given this recently announced discovery was apparently made in early 2010, it seems reasonable to believe that it is the same thing.

Jackson notes that there are reasons for skepticism on Iran's claims, that there has been little evidence provided of the discovery and that it could be an "attempt to maintain international interest and project an air of confidence." Still, if it is true, it could have several significant effects, he says:

-- If the claim is true, it could cause a political crisis with Azerbaijan over the border
-- Maritime tensions are likely to rise in light of increased militarisation and other points of stress in the relationship
-- The issue may provoke a broader push (led by Russia) to force Iran into accepting the common position on the Caspian
-- Other options: a demand for joint sharing of resources; a call for a moratorium on developing disputed fields.

So far Azerbaijan hasn't publicly said anything about this new discovery. This could be because Azerbaijan's government, prone to overheated military bluster directed towards Armenia, is worried that it will be exposed as a paper tiger if it tries that with Iran.The cables describing the 2009 tension reported that one Azerbaijani official said the country "lacked the ability to mount a significant military response. 'You know our military capacity on our borders. We do not have enough capacity.'" Another added that "'sometimes we prefer to close our eyes,' because possible courses of action appear difficult or unpalatable." That may still be the case today.