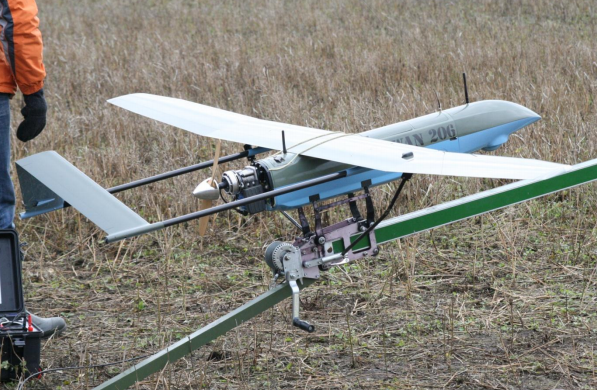 The Estonian Swan drone, above, and its Georgian younger brother, below.

Georgia made a splash last week when it rolled out what it said was its first domestically produced drone aircraft. “No one will share this [pointing to the Georgian-made drone] with others; it’s ours," said President Mikheil Saakashvili, at its unveiling. "We no longer depend on others.”

But now it's emerged that the drone may not be quite as homegrown as was originally presented. A variety of observers have noticed a strong similarity between the Georgian drone and the Swan, a UAV produced by Estonian company ELI. (See here for some more photos of both.) Even the digital camouflage pattern on the ground control system (visible at about 0:41 of the video in the original post) seems to be the same pattern used by Estonian armed forces.

Irakli Aladashvili, the editor of a Georgian military magazine, says the drone does in fact appear to be a close relative of the Estonian. Writing in the newspaper Kviris Palitra (below translation from BBC Monitoring), he says:

A detailed study showed that the Georgian unmanned aircraft presented last week looks very similar to the Estonian one, which makes us think that the unmanned aircraft christened as Georgian, might be made under the license of Estonian ELI. Suspicion is deepened by the camouflage cover of the computer of the land complex for the control of the pilotless aircraft. This kind of camouflage is typical only of the Estonian Army.

Certainly, it is good that the Georgian industry starts assembling aircraft under a bought license, as the Georgian Army badly needs unmanned aircraft. In addition, sharing the experience of others is better than inventing a wheel anew, especially when NATO member Estonia, which has supported Georgian military forces earlier too, is lending us a hand. However, it would have been better if they had told us the truth at the presentation. At present, ill-wishers are "having fun" in the Internet regarding the discovery of the first Georgian unmanned aircraft's "elder brother" in Estonia.

Of course, if the aim is to get a UAV from a country that won't give key information to Russia, as Israel apparently did, Estonia is a good choice. But as Aladashvili says, why not just admit that up front? But one Georgian wit noted in a forum post, the name of the Estonian drone is a fortuitous one: "It will be named Svan and we can still call it ours."