Is Kazakhstan Getting Eurasian Union Blues? 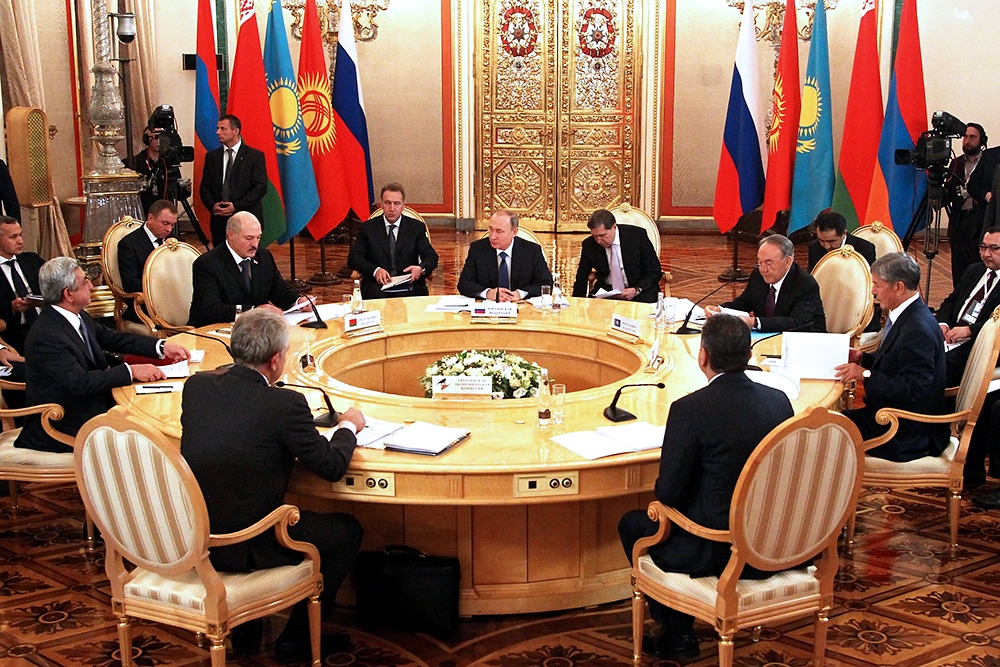 Tough times for the Eurasian Economic Union are causing disillusionment among its members — Kazakhstan most notably — although Russia seems indisposed to pay heed to such misgivings.

Instead, the Kremlin has become embroiled in a series of diplomatic dust-ups, leaving its closest partners in the five-nation trade bloc hostage to Moscow’s economic and geopolitical policies.

Kazakhstan’s septuagenarian leader, Nursultan Nazarbayev, presides over an economy roughly one-tenth the size of Russia’s, but more than twice the size of the economies of the other EEU members – Armenia, Belarus and Kyrgyzstan – combined. He has cut a particularly frustrated figure in the group in recent times.

In a February 11 appeal to EEU heads of state, Nazarbayev outlined the argument for closer integration with both China’s Silk Road Economic Belt concept and the European Union, where Russia’s ties remain frazzled by its adventures in Ukraine.

“We see the Eurasian Economic Union as an open economic association, relatively integrated into the global economic system as a reliable bridge between Europe and a rising Asia,” he wrote, in a call to make 2016 “the year to deepen the economic relations of the Union with third countries and key trade blocs.”

That desire to branch out is understandable. Kazakhstan’s overall external trade turnover fell by 37 percent in 2015, and by 29 percent within the EEU. The national currency, the tenge, has lost half its value against the dollar since the national bank scrapped a costly trading band last August.

Indicators for the bloc across the board were not much better. Intra-EEU trade tumbled 26 percent and members spent an average of 10-15 percent of their sovereign reserves defending national currencies that are wilting under the pressure of falling oil prices and Russia’s souring economy.

And even though the EEU was meant to usher in a new era of trade harmony, the reality has been less rosy. Both Belarus and Kazakhstan have found themselves engaging in periodic trade conflicts with Russia to protect strategic areas of the economy from currency volatility — a problem Moscow offered to mitigate through the formation of a single currency for the bloc.

“It is very difficult to point to any concrete benefits of EEU membership in the past year,” Zach Wiltin, a Eurasia analyst at the Washington DC-based Eurasia Group told EurasiaNet.org.

“EEU membership might have made the situation worse for other member states by intensifying exposures to Russia,” said Witlin, noting Russia had “largely failed to secure Belarusian and Kazakh cooperation” in enforcing counter-sanctions against Brussels.

Pro-government media in Russia conspicuously ignored Nazarbayev’s appeal, despite it appearing on the EEU’s official website. The question of how to open what Russia regards as a traditional sphere of influence to much-needed trade and investment from major non-bloc economies is likely to define the EEU’s viability.

Russian economy minister Alexey Ulyukaev has said that over 40 countries and organizations have expressed interest in cooperation with the EEU. But it is the EEU’s relationship with China, which views Kazakhstan as a key point of entry for huge infrastructure and trade investments, that will take precedence for Astana.

Russia has so far played it cool over Beijing’s calls for a free trade area within the Shanghai Cooperation Organization (SCO) and resisted the creation of an SCO development bank that would be funded largely with Chinese capital.

Brussels is, in turn, dangling the carrot of closer ties between the two trade blocs, but such an offer is likely intertwined with negotiations surrounding Ukraine and Syria, and conditioned on concessions that may not be palatable for Russian President Vladimir Putin.

Turkey is also a solid trade partner for Kazakhstan and “was once considered as a partner of the Union” but any agreement became “impossible for political reasons” after Ankara shot down a Russian military jet last November, Nikita Mendkovich, an analyst at the Russian International Affairs Council told EurasiaNet.org.

Although Nazarbayev appeared to edge towards Moscow following the shoot-down of the jet, he admitted the standoff had created “big problems” for Kazakhstan when Turkish Prime Minister Ahmet Davutoglu visited Astana in February.

Kazakhstan’s sulking is not lost on the Kremlin, which is aware that Nazarbayev’s ambitions as a statesman go beyond the narrow confines of the “Russian World” practiced Eurasianists are fond of referring to.

As the Central Asian state prepared to become a full member of the World Trade Organization in November, an op-ed written by Russian pundit Grigori Trofimchuk and circulated across pro-government media dwelled on whether Russia might “lose Kazakhstan” after the accession, possibly as a result of Ukrainian-style political turbulence.

In a typically Russian reading of events in Ukraine, Trofimchuk wrote that countries like Kazakhstan could, at a time of growing uncertainty connected to Nazarbayev’s age and the unresolved issue of succession, fall prey to “something like the Euromaidan in Kiev” involving “resignation...by force, with weapons in the hands of militants.”

To avoid such a scenario and a subsequent lean towards the West on Astana’s part, Trofimchuk called Moscow to “further strengthen integration relationships” with the country and others in its near abroad.

But for the moment, it seems Kazakhstan is looking for more integration without, rather than within.

In the last year, Kazakhstan “has given clear examples of anxiety” over Russia’s bid to introduce European Union-like institutions into the Eurasian space, according to Rilka Dragneva-Lewers, an expert on the Eurasian Economic Union at the University of Birmingham in Britain.

In particular, that anxiety relates to “serious disagreements about widening, both in economic terms, towards a monetary union, and political terms, over the inclusion of institutions such as a parliament, that might signal a political agenda,” Dragneva-Lewers told EurasiaNet.org by email.