Is Kazakhstan’s political opposition creeping back?

The president’s advanced age instills his detractors with hope a change of leadership is imminent. 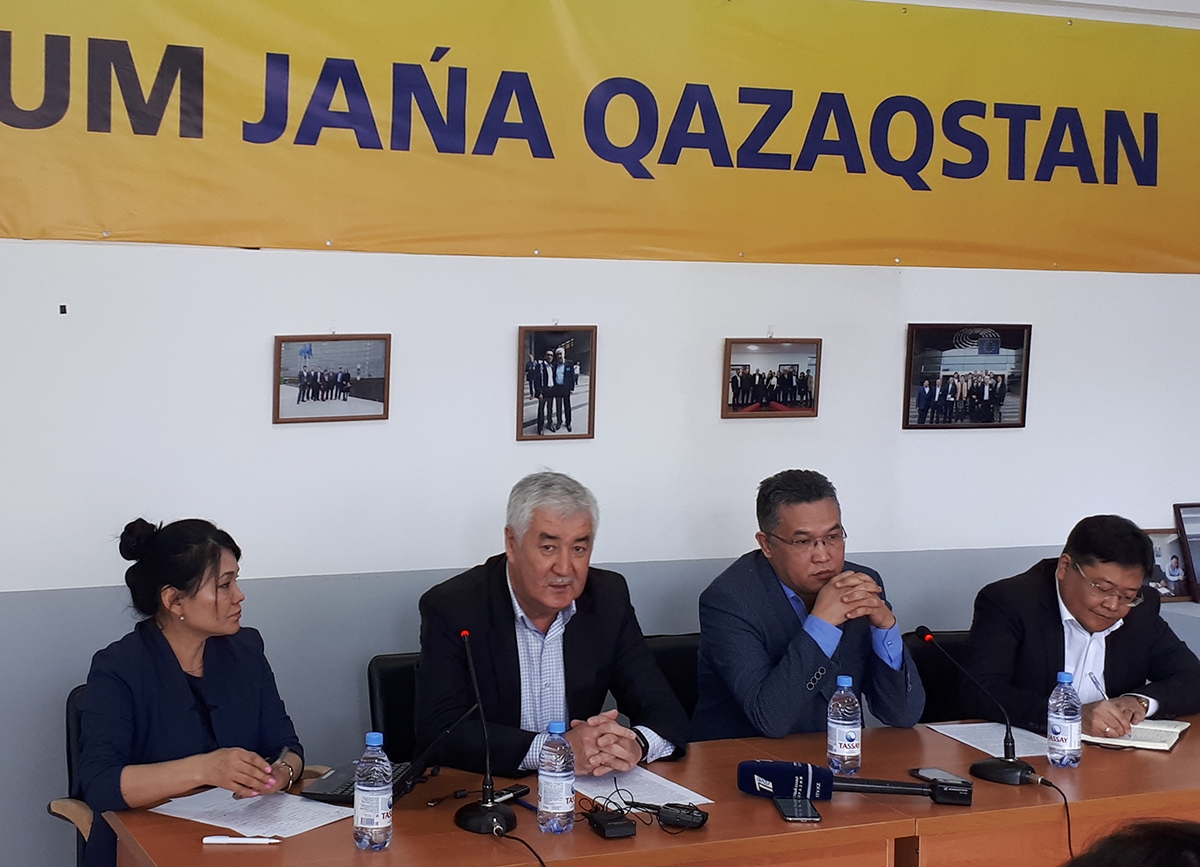 After a long hibernation, organized political opposition is making a comeback in Kazakhstan.

For over five years, the country’s political scene has been utterly moribund. The parties that are allowed to exist sing from the same hymn sheet as the authorities. Dissenters have either found their organizations banned or have withered away into insignificance.

Now, two movements have surfaced with a similar goal, but very different approaches.

One is the Democratic Choice of Kazakhstan, which commonly goes by its acronym DVK, and is led by Mukhtar Ablyazov, a France-based ex-banker bent on toppling President Nursultan Nazarbayev through direct action.

Jana Qazaqstan publicly declared its existence at a press conference in Almaty on May 17, following an inaugural get-together in Brussels in April. The movement is conceived as a broad church pooling the energies of prominent figures from different walks of life who want to nudge the country onto a more democratic path and give regular people a stake in their future.

“Jana Qazaqstan is offering an alternative with pluralistic thinking and a just and democratic society respecting human rights and freedoms, where politics and the economy work for the benefit of people,” founding member Rasul Zhumaly told the news conference.

Many of the faces in Jana Qazaqstan will be familiar to seasoned observers of the often-hapless opposition scene in Kazakhstan. There are political scientists like Zhumaly and Aidos Sarym, journalists Yermurat Bapi and Nazira Darimbet, rights campaigner Galym Ageleuov, and one-time opposition party leaders Serikzhan Mambetalin and Amirzhan Kosanov. Mambetalin, who is a British passport-holder these days, is involved in the movement despite a court order ostensibly prohibiting him from engaging in public activities.

The timing for the group’s appearance is predicated on the expectation that Kazakhstan is on the cusp of a new phase in its history. Nazarbayev will turn 78 in July. That advanced age instills his detractors with hope a change of leadership is surely imminent.

And Jana Qazaqstan says it wants the broader population to be involved in the transition process. Their concern is that without the requisite scrutiny, the whole process and the divvying out of influence and resources will all be done in smoky backrooms.

“We say that the public […] should not occupy the role of bystander and just accept what the authorities designate for us,” Kosanov explained. Society “should be a participant in this process – we are going to demand that.”

Jana Qazaqstan has eschewed militant language and is positioning itself as open to constructive engagement with the authorities. This docility has led to suggestions from some quarters that the government may in reality be pulling the strings to fashion a neutered opposition.

That solution has provided rich dividends in the past, so the suspicions are not without basis. Parliament is currently dominated by the ruling Nur Otan party, but there are two pocket opposition forces in there too with the ostensible function of simulating the appearance of a genuine multiparty chamber.

The founders of Jana Qazaqstan reject the idea they are part of any such scheme.

Jana Qazaqstan has also come under fire over the involvement of Akezhan Kazhegeldin, a former prime minister who fled Kazakhstan in 1997 after a run-in with Nazarbayev. Members deny Kazhegeldin, who attended the Brussels meeting, is Jana Qazaqstan’s financial backer and claim they require only modest financing, which they say they can provide themselves.

For all the allegations that Jana Qazaqstan might be a catspaw, its founding statement pulled no punches about what it sees as the legacy of Nazarbayev’s rule.

Kazakhstan missed an opportunity to become a “second Kuwait” and instead languishes “at the level of the poorest African countries,” the charter stated. The litany of complaints listed in the document included corruption and the squandering of petrodollars on vanity projects. There were also harsh words about the “retreat from basic principles of democracy and freedom, pluralism and equality.”

But while the movement is voluble when criticizing, specific policy recommendations are thin on the ground.

One broadly stated goal is to draft a fresh constitution and new laws governing the political process. These, they say, would pave the way for “the first fair, free and democratic elections in the history of independent Kazakhstan.”

And they are not shying away from tapping into the latent potential of nationalist sentiment for political capital, as evidenced by their calls for a debate to re-evaluate the Soviet totalitarian past and a process of “decolonialization.” The involvement of prominent community leaders like Dos Kushim will lend legitimacy to these efforts.

For all its claims to be embracing novelty, Jana Qazaqstan has so far performed dismally in trying to drum up a credible online presence.

As of May 24, Jana Qazaqstan’s Facebook page had nearly 800 followers, but its reach elsewhere on the internet is decidedly tragic. It had only one Twitter follower and seven Telegram subscribers. It was performing only a little better on YouTube, with 72 subscribers, and Instagram, with 35 followers.

There are currently no plans to create a political party. For the time being, the focus is on registering as a public association. Even that modest ambition may face pushback, however.

“In conditions when the authorities show utter intolerance toward dissenting views, toward the slightest criticism of themselves, they may obstruct our initiatives,” Kosanov said.

At the other end of the opposition spectrum, Ablyazov has adopted more of a take-no-hostages style. He has emulated Russian opposition leader Alexei Navalny in his embrace of YouTube and regularly appeals for direct action by his supporters. The strategy so far has been to coax disgruntled protesters onto the streets with the end-game of bringing about a rapid transition.

“I am just realizing the goal I set myself a very long time ago, and that is to achieve regime change and the establishment of a democratic state,” Ablyazov told Eurasianet in a Skype interview on May 16.

This abrasive style has mainly had the result of hardening Astana’s determination to quash him by all means possible.

DVK has only been around for a year – as a reincarnation of a reform movement spearheaded by Ablyazov in 2001. It was set up in April 2017 after Ablyazov was released from a Paris prison at the end of a legal extradition campaign mounted by Russia – Kazakhstan’s close ally – and ultimately dubbed politically motivated by a French court.

Even before its first year was out, DVK got banned and designated an extremist organization by a court in Kazakhstan. Anybody found distributing party literature or even casually sharing a DVK post online could face harsh penalties.

Although Ablyazov acknowledges his goals are radical, he does not agree his methods are outside the bounds of acceptable political activity.

“Our aims and objectives are totally constitutional,” he said. “I have always said that we will achieve regime change through peaceful means.”

Developments in Armenia – where mass protests forced the prime minister to resign last month – have inspired Ablyazov to further action. He hopes optimistically to achieve regime change before the end of the year.

In truth, however, all the Ablyazov-incited protests have been decidedly modest and could in no credible manner be described as threats to the prevailing order.

All the same, the government has displayed signs of profound anxiety by rapidly and aggressively shutting down even the most feeble turnout. The extent of the paranoia has on occasion reached perverse heights. During spring equinox celebrations in Astana in March, people carrying festive blue balloons the shade of Kazakhstan’s flag were hauled off the streets by police rendered suspicious by Ablyazov’s previous appeal for his supporters to wave turquoise balloons at street events. On May 10, the few who responded to Ablyazov’s call to protest were swiftly detained.

Ablyazov is promising more demonstrations on June 23 and on July 6. The latter is a multipurpose public holiday that will mark the 20th anniversary of Astana being designated Kazakhstan’s capital as well as Nazarbayev’s birthday.

If the past is a guide, protesters can expect rough treatment.