Is Kyrgyzstan-Tajikistan Border Dispute About Oil? 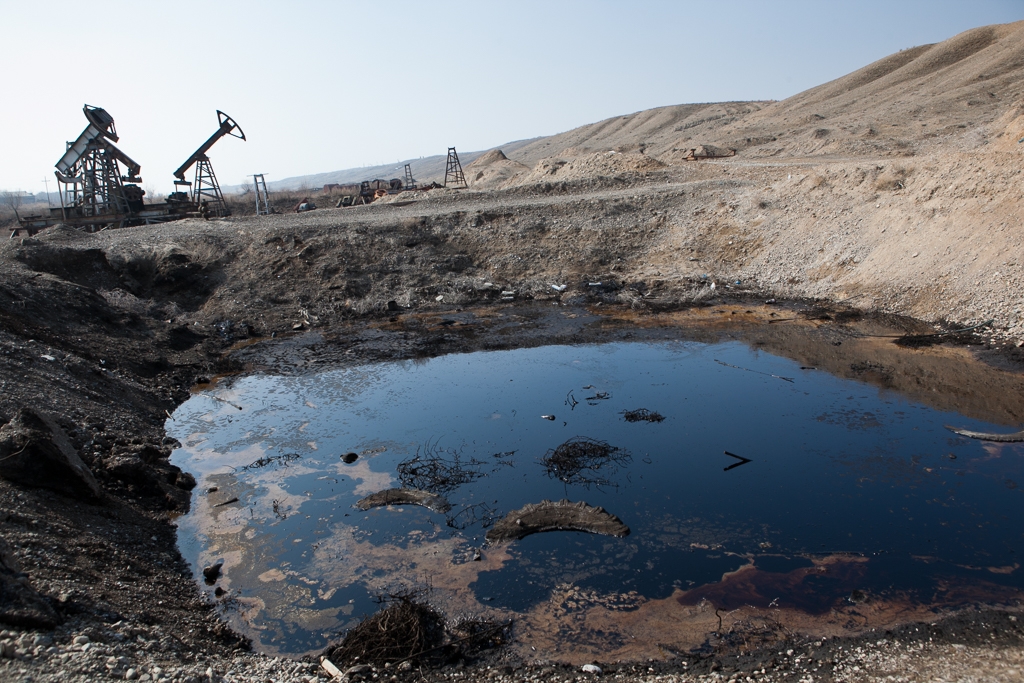 The collapse of the Soviet Union left industry scattered across the Fergana Valley regardless of modern borders. This oil field stands near Jany Jer, Kyrgyzstan, on the Uzbek border. (David Trilling)

Last October, according to Kyrgyz accounts, Tajik soldiers crossed into disputed territory to repair an oil and gas well that a Tajik company had used since independence—pumping, by some estimates, 5 tons of oil a day. Kyrgyz border guards took notice, shut down the operation, and told the Tajiks to get lost.

Could that episode have led to a shootout between Tajik and Kyrgyz border guards near Ak-Sai on January 11? Both countries are starved for energy resources, so the idea they could fight over an oilfield seems plausible.

When Kyrgyzstan, Tajikistan and Uzbekistan were all Soviet republics, their winding, undefined borders mattered little. But when Moscow’s rule evaporated, the Soviets left an industrial legacy overlying the Fergana Valley’s new borders: crisscrossing pipelines and derelict derricks in no man’s land.

Since the 1970s, Soviet Tajikistan and then the Republic of Tajikistan had been pumping oil from the field, Katta-Tuz, which the Kyrgyz say is on disputed territory. “In August 2013 I told them to stop,” recalls Kyrgyz Deputy Prime Minister Tokun Mamytov. “It’s a big problem. […] The first problem is not the road, but oil and gas.” (Mamytov’s counterparts in Tajikistan refused to comment.)

That road is what ostensibly provoked the shootout in January, which left eight injured and led the Kyrgyz to unilaterally seal the border ever since (except for NATO supplies to Afghanistan). The Kyrgyz want a road to circumvent disputed territory. The Tajiks say they are building it on disputed territory and that it will give the Kyrgyz unfair leverage in future negotiations over land, water, and the placement of the border, which after 22 years of independence remains only about half delimited. (For a more detailed dispatch on the border tensions, see this March 12 feature.)

Mamytov said the Tajiks planned to cut the water supply to Kyrgyzstan’s Batken Province to force the Kyrgyz to cede land and oil rights: “That's why they attacked on January 11 … to stop providing water to our reservoir. People would suffer and we would make concessions, give away oil and gas deposits in exchange for the channel.” Mamytov, who says the Kata-Tuz oilfield is “three or four kilometers” from the Tajik border, continued:

For 22 years Tajik oilmen were using [Katta-Tuz] and exporting our oil and gas for free. In August 2013, I went there and asked if they pay any money for this or if there is any agreement granting them the right to extract oil and gas on our territory. They don’t pay taxes, there’s no agreement. So I closed it. The amount of oil and gas is large. They asked me if I can let them continue, but how can our government let them do this on our territory without agreement and without payment?

But how much is oil adding to the tensions? I’ve asked two experts on the region’s intricate and perpetual border negotiations to comment:

Madeleine Reeves, a lecturer in social anthropology at the University of Manchester who has carried out fieldwork in the disputed territories for 10 years, doesn’t believe the recent violence was simply retaliation.

I don't find compelling the claim that this is about Tajik revenge for Kyrgyz assertiveness in a direct sense. But I do think that Kyrgyzstan has understandably become more assertive of various territorial rights in those cases where land was loaned to a neighboring republic during Soviet times, including for resource extraction. Kyrgyzstan has also devoted resources to new road infrastructures to enable border populations to move about without entering the neighboring state. In border regions of Tajikistan similar calls are often made by the local population toward their government – there is a feeling that their government should match the assertiveness of the Kyrgyz side with respect to territorial claims. This context may be contributing to a newly assertive Tajik concern to prevent what it perceives to be claims upon disputed territory."

Anna Matveeva, a senior fellow at the Department of War Studies, Kings College London, who has conducted extensive field research in the region, says both sides are looking for reasons to argue:

People want to find a conflict narrative. There’s always a story about some hidden wealth. Soon there will probably be gold and diamonds. In reality this deposit has been functioning as a minor thing, quite small scale, since Soviet times. Then, some of the assets in these cross border areas were managed from other republics and that continued after the Soviet Union fell apart. At first no one paid attention. Then the border delimitation gained momentum, the Kyrgyz looked closer and said, “Hang on, this is on our territory.” There was an underground pipeline in Soviet times. Then [last year] the Tajiks tried to build another pipeline and the Kyrgyz noticed. There will be other [disputes over resources]; they’ll find other things.

At this point, with regular disputes between villagers on the border, and heavily armed – but not particularly experienced – conscripts patrolling, it seems the two sides don't need an excuse to quarrel.