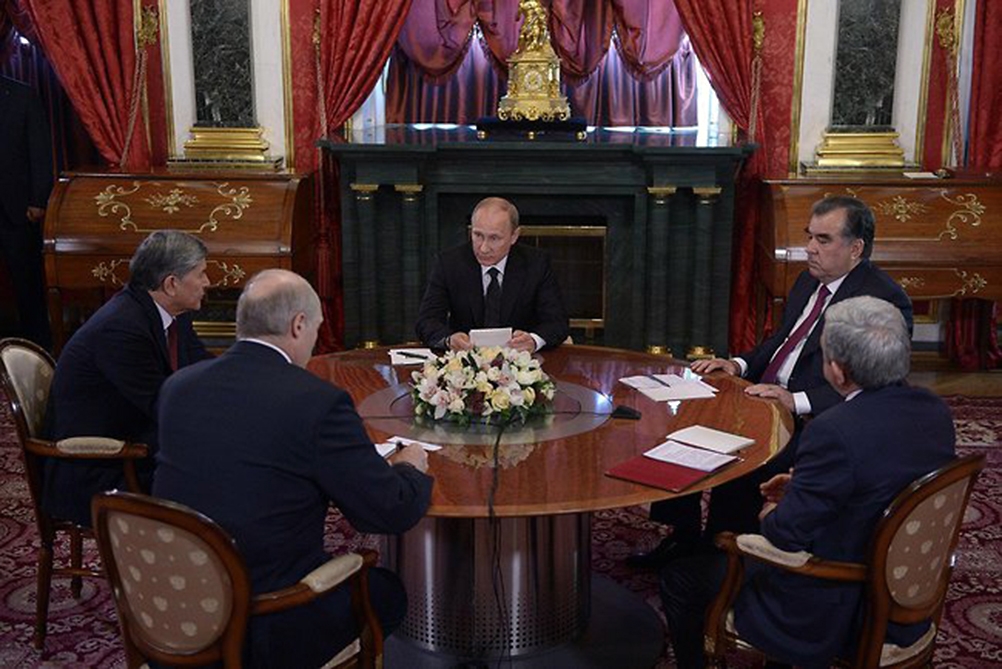 Victory Day on May 9 was an occasion for Russians to indulge in patriotic flag waving in Moscow. Russian President Vladimir Putin used the previous day to muster a show of diplomatic support for his efforts to bring formerly Soviet states closer together.

On May 8, Putin met with the presidents of Armenia, Belarus, Kyrgyzstan, and Tajikistan in the Kremlin. Following the success of the Euromaidan movement in Kyiv, Putin has made it a priority to shore up support among other formerly Soviet states for Russia’s geopolitical agenda, in particular the establishment of a regional economic union as a precursor to a wider political union of Eurasian states.

A treaty on the formation of a Eurasian Economic Union (EEU) is due to be signed in Astana in late May, paving the way for its launch in January 2015. The body would be an outgrowth of the existing Customs Union, a free trade zone comprising Russia, Belarus, and Kazakhstan. Armenia and Kyrgyzstan are slated to join the Customs Union before the end of the year.

As Putin warmly welcomed existing and potential union members in Moscow on May 8, ostensibly for security talks unrelated to the economic integration project, the question on the lips of Kremlin watchers was: will they or won’t they put pen to paper on the EEU founding document in less than three weeks’ time?

The Moscow meeting came on the heels of a disastrous Customs Union summit in Minsk on April 29, where expectations of finalizing the treaty fizzled as Putin and his counterparts, Alexander Lukashenko of Belarus and Nursultan Nazarbayev of Kazakhstan, admitted that, at this late stage, they have differences over the pact’s wording. Nazarbayev’s conspicuous absence from the May 8 talks in Moscow, convened under the auspices of the Collective Security Treaty Organization, set tongues wagging about differences of opinion. Contacted by telephone by EurasiaNet.org, Nazarbayev’s office said it had no comment -- but some observers interpreted his no-show as a snub to Putin from one of his closest allies.

As other regional leaders were cozying up to the Kremlin, Nazarbayev was having a tete-a-tete in Astana with a senior official from the United States, Moscow’s arch-rival in the geopolitical struggle over Ukraine. Deputy Secretary of State William Burns used the meeting to assure Nazarbayev of America’s “enduring” commitment to Kazakhstan and Central Asia, the State Department said, as the Ukraine crisis helps “underscore what’s at stake.” Regional analysts tend to believe that the recent signs are not indicators of insurmountable problems surrounding the EEU’s formation. “It’s hard to predict anything these days, but it seems to me that the treaty will be signed -- but in a reduced form, with most difficult issues to be resolved after signing,” Nargis Kassenova, director of the Central Asian Studies Center at Almaty’s KIMEP University, told EurasiaNet.org.

“If it’s not signed it will be a blow to the reputation of Vladimir Putin, but also to some extent that of Nursultan Nazarbayev,” she added. “Both invested a lot of personal image capital into it.”

Alex Nice, a regional analyst at the London-based Economist Intelligence Unit, also feels that integration plans are more or less on track. “It's possible there might be a further delay to the final signing of the document, but I'm confident that the treaty will come into force as planned next January,” he told EurasiaNet.org, pointing out that “negotiations on the EEU treaty are very far advanced.”

“Of course, some of the more controversial provisions will be subject to lengthy transition periods,” Nice added.

The chances of the agreement being signed on time are “quite high,” concurred regional security expert Aida Abzhaparova of the University of the West of England. Nazarbayev is a cheerleader for integration, she pointed out, and signing the treaty in Astana would have huge “symbolism” for him: Nazarbayev first proposed the notion of a Eurasian union long before Putin took it up, and sees himself as “the father of the idea.”

Speculation that the union might be heading off the rails was fueled by reports on May 7 that Kyrgyzstan’s prime minister, Joomart Otorbayev, wished to postpone membership for a year -- but his spokeswoman denied the claim. Otorbayev had, on the contrary, said Kyrgyzstan would complete the legislative groundwork to join by the end of the year, Gulnura Toraliyeva told EurasiaNet.org by telephone.

Armenia is expected to join sooner – but is currently bogged down trying to negotiate some 900 exemptions to the union’s single customs tariff.

Analysts believe that incorporating the weaker economies of Armenia and Kyrgyzstan into the union is a sticking point in the treaty negotiations; Kazakhstan and Belarus are believed to be wary of the economic implications amid Russian efforts to expand its geopolitical clout.

Perhaps the biggest threat to the EEU’s success is Russia’s actions in Ukraine, suggests Kassenova. “The Ukraine crisis undermined Russian policy in the post-Soviet space,” Kassenova said. “Now it’s seen as a bully without any respect for the sovereignty of its neighbors. Plus, the crisis undermined the economy of Russia and made it less capable of serving as the locomotive of integration.”

“On the one hand, the crisis should give more bargaining power to Belarus, Kazakhstan, and Kyrgyzstan,” she continued. “On the other, the overall destiny of the project is in doubt: will Russia have the will and resources to support and sponsor it further?”