Is Russia Cutting Off Arms Sales To Azerbaijan? 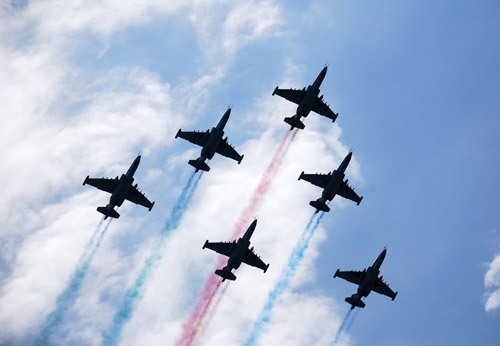 Azerbaijan's air force on display. Re-equipping could be in jeopardy if Russia cuts off sales to Baku. (Photo: Ministry of Defense of Azerbaijan)

For some time now, there have been unofficial reports that Russia has cut off arms sales to Azerbaijan, in particular of military aircraft that Baku has been seeking. There has been no comment from Moscow, either formally or via anonymous sources, and it's not clear why Russia would have made this move. Possible motives include Azerbaijan's hard bargaining over the Gabala radar station or a more general desire to punish Baku for refusing to take part in its various post-Soviet integration schemes. But a new report in Azerbaijan's APA news service simultaneously provides some compelling evidence that the reports are true and proposes the most unlikely motive: the machinations of the Armenian lobby in Russia. From APA:

Persons of Armenian descent, who lead the Russian aviation industry, have impeded the negotiations between Azerbaijan and Russia on the purchase of combat aircrafts, military sources told APA.

According to the information obtained by the Azerbaijani side, as a result of the efforts made by the persons of Armenian descent in the leadership of Russia’s United Aircraft Corporation, as well as MIG and Sukhoi companies, the negotiations with Russia on the purchase of combat aircrafts Su-27, Su-30 and MiG-31 have not produced results. Except for YaK-130 advanced training aircraft, Russia refused to sell warplanes to Azerbaijan.

Indeed, among UAC's top management, according to its website, there is one recognizably Armenian name -- Mikhail A. Pogosyan, president and chairman of UAC's executive board. But it's fair to say that if Mr Pogosyan were carrying out Armenia's strategic interests rather than those of Russia, he wouldn't have that job for long. While Russia is a strategic partner of Azerbaijan's foe Armenia, it has nevertheless conducted a robust arms trade with Baku, in recent years including sales of combat helicopters, air defense, and armored vehicles.

So what to make of this move, if Russia is in fact cutting Azerbaijan off? BBC Monitoring recently rounded up some of Baku's expert opinion on this. The chairman of the Azerbaijani National Strategic Research Center Natiq Miri told the opposition newspaper Yeni Musavat:

"When Putin returned to office, Russia pursued a new policy that includes offering a customs union and a Eurasian Union model. Today Putin puts his efforts towards implementing this model. Because if this plan is implemented, all post-Soviet republics will have to indirectly subject their independence to Moscow. Since Azerbaijan does not agree, Russia is creating problems for our country. One of these problems is Russia's restriction on selling advanced weapons to Azerbaijan."

The consensus is that Azerbaijan has other options, including other purveyors of Russian-designed equipment, like Ukraine or Belarus, to other sources like Israel, China, Pakistan, and Turkey. The opinion seems split on the role of NATO and the West; one source quoted says that Russia wouldn't have made the move without coordination from Washington, another says that NATO countries could fill in the gap created by Russia's embargo. But both those seem unlikely. In the case of the US and some European countries, there actually are Armenian lobbies that block weapons sales to Azerbaijan.

Anyway, if it is in fact true that Russia is cutting Azerbaijan off, it would be a pretty significant move. Could there be some truth to the dark warnings of increasing anti-Azerbaijani government activity from Moscow?